Evan Hutchings made the move from Fort Smith, Arkansas, to Nashville in 2006, enrolling at Middle Tennessee State with a plan to be a studio musician. “I wanted to be Steve Jordan,” he says. “That was the goal.” Like many musicians in college, Hutchings ended up on the road with a band before graduating. “I was studying jazz drumming with Lalo Davila and Tom Giampietro and at the same time minoring in recording engineering,” he says. “I had an opportunity to go on a nationwide tour. I took it and didn’t look back.”

When he got back from touring, Evan set his sights on more studio work. “I was always buying drums that I thought would translate well in the studio,” he says. “I was learning how to tune drums, and I was making my own makeshift studios in whatever house I was living in at the time. Around 2009 I started working with the producer Neilson Hubbard, and we did a ton of records together. He gave me my first shot in the studio.”

Hutchings continued to gig, but once he got busy enough with studio work, he started to turn down tours. “I’ve always felt more creative in the studio, and I love the process of creating something that will live on past the day the music was played in the room,” he says. “It’s like a musical snapshot that you can look back on.” 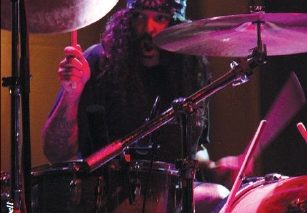 In the Studio With Brothers Osborne’s Adam Box