For this series, we’d be very remiss if we didn’t discuss the great swing drummer Gene Krupa. Gene was one of the most prominent people to bring drums to the forefront in an ensemble. Prior to him, the drummer’s role was primarily to support the ensemble. Krupa was often a featured artist.

Gene always exuded energy and enthusiasm in his playing. His showmanship was incredible, and his movie star looks completed the picture. His artistry struck a wonderful balance between being able to support an ensemble or vocalist and then being able to bring down the house with his soloing. Interestingly, Gene was the first to admit that he didn’t have the technical chops of some of his peers, such as Buddy Rich and Louie Bellson. But both Buddy and Louie looked up to Gene and admired his ability to capture and excite an audience.

Krupa was Chicago-born and started playing drums in the mid 1920s. His early days involved performing with many of Chicago’s best players. His skills and showmanship eventually caught the attention of superstar clarinetist Benny Goodman, who invited Gene to join his band in 1934. Krupa’s association with Goodman led to the recording of “Sing, Sing, Sing,” which was the first commercially recorded song featuring an extended drum solo. Gene left Goodman’s band in 1938 and formed his own ensemble, which he maintained in various forms for the remainder of his career.

Past Masters of Rock… Absorb, Adapt & Adopt!
By Dom Famularo 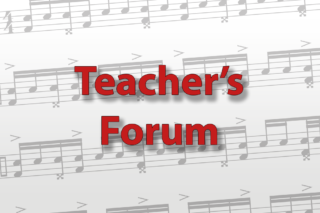