Celebrate Your Choices for the Extraordinary Drummers of the Past Year

It’s that time again for the Modern Drummer staff to thank the community for making possible our annual Readers Poll. Your enthusiasm for all things drumming, your knowledge of drum culture, and your well-considered votes are what have steered this vibrant celebration of drummers each year since 1979. A huge congrats to all the drummers MD readers have acknowledged and acclaimed in 2021. Bravo!

“Thank you to all my fans and the readers of Modern Drummer for this huge honor. Congratulations also to all the other incredible artists who were also nominated in this category. Modern Drummer has always been—and will always be—the most reliable source of information and education in the global drumming scene. Receiving acknowledgement from MD and its readers makes all the hard work worth it. Thank you so much to Modern Drummer and all of my supporters. Look out for much more drumming education and entertainment coming your way.”

“To be recognized by peers and fans alike—and among a group of monstrous drummers no less—is a feeling like no other. Thank you, MD readers. I’m not sure we got the correct Chad here, but I am very humbled and honored to accept.”

“It’s an honor to win the Fusion category in this year’s Readers Poll. The other nominees are nothing short of amazing, and they all deserved to win. I love freedom in music, so I do consider myself a fusion drummer in the sense that my playing is a result of years of listening and performing all kinds of styles and genres. Thank you all for the support—it does not go unnoticed.”

“I’m not part of the status quo. It’s risky to follow me, because I’ve somehow managed to make a path playing simple. I can do the gospel-chops thing, but I know a million of those gospel drummers who can’t play a straight break to save their life.” [From his June 2010 cover story.]

“Thank you, Modern Drummer—and all the readers—for your support and encouragement through the years. God bless you, and keep you, always.”

“Modern Drummer has always been a reference point in the drumming community, and it means a lot to me that I won in the metal category. I feel like an apprentice among many amazing drummers, and I don’t know if I deserve this award. It’s not just about winning, but being honest with your art and getting recognized for it. I want to thank all the people who voted, as well as Modern Drummer for its ongoing and extremely important service to our music world.”

“Thanks so much to everyone who voted. It’s so cool to be included in this, and to be amongst such good company. I can’t wait to get back out there and tour again very soon. Hopefully, some of you who voted will be coming to the shows, and I’ll see you there.”

“I’m not the hardest, fastest, technical, or musical player, but I do try to lead and support in every situation I’m in. I’m so honored and humbled to have the MD readers recognize me. Viva La Rock!”

“Music has been my life, and I will always be its servant. However, the role the audience has taken in building up my work is a significant one. I humbly thank everyone, and I can promise this is only the beginning.”

“I want to say ‘thank you’ to all the readers of MD. It’s such an honor to be recognized by all of you fellow drummers.”

“Peace and blessings, people. I’m grateful to be the winner of the Readers’ Poll award for Up and Coming. I’ve been on my marathon from the beginning, and to be recognized for my art form along the journey feels good. Modern Drummer has covered some of my favorite musicians—Carlton Barrett, Billy Cobham, Tony Williams, and Ndugu Chancler, to name a few—so to be nominated means a lot. Drums are the original communication on earth, and it’s important for me to tap into that energy—which has allowed me to express my voice through this instrument. I give thanks to the ancestors for the knowledge, light, and guidance. Love to all my people who voted for me.”

“Thanks a million to all the readers of Modern Drummer. Your votes are like rays of light of pure encouragement. Thank you from the bottom of my heart.”

“Recording this album with my dear friend Mix Master Mike was a total blast! He is by far, in my opinion, the best turntablist of all time. In addition, he has a great musical vocabulary and the knowledge of someone who plays a great jazz repertoire. This album was a total exploration in improvisation. We went in, Chris Steffen got amazing sounds, we hit ‘Record,’ and we were off. Mike took it to his lab, and he and I mixed it at Village studios in Los Angeles with Gabe Burch. Then, it was mastered by the one and only Greg Calbi at Sterling Sound. Thank you all so much for digging what we did. You have no idea what it means to us.”
— Steve Jordan 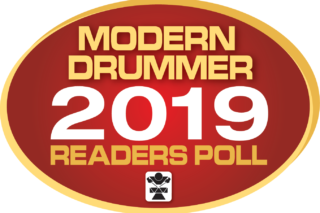 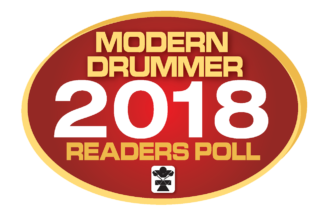 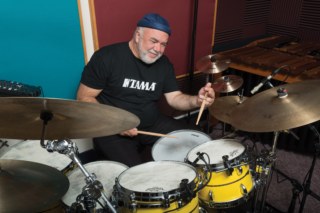