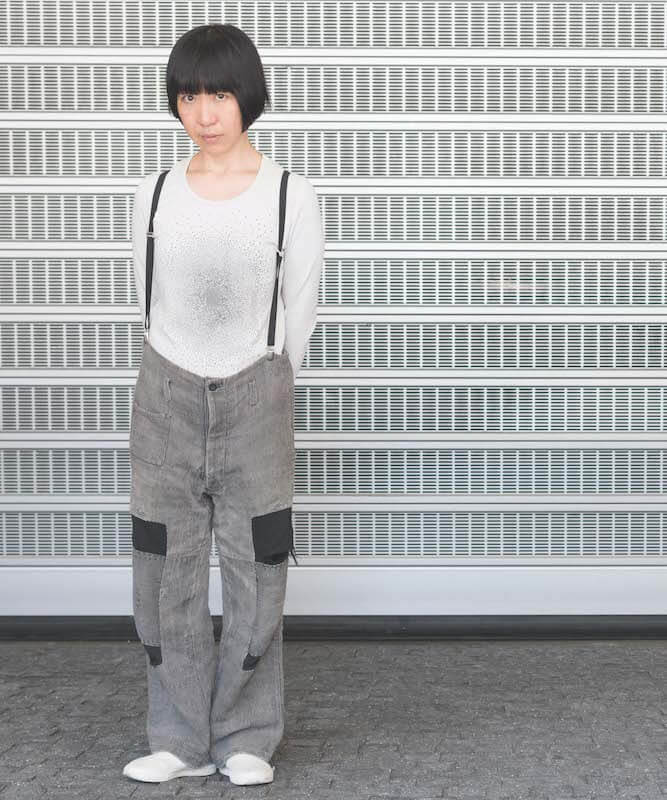 YoshimiO—“Just my name with a circle at the end,” the drummer explains—is a multi-instrumentalist and creative force at the center of a number of extraordinary musical powerhouses in Japanese experimental music. Drummer and MD contributor John Colpitts, who’s had the good fortune to perform with her in the world-famous noise-rock aggregation known as Boredoms, gets to the heart of her art.

Since joining Boredoms, the boundary-pushing Japanese band led by vocalist Yamantaka Eye (aka EYE), YoshimiO has been its trickster driving force for nearly the entirety of its thirty-year history. YoshimiO’s humor and buoyancy off set EYE’s ambitions to stretch the rock band format beyond its conventional borders. People who have spent time with YoshimiO can attest to her earthy sense of humor, infectious laughter, and joyous mien. While her astounding guitar and vocal work with the bands OOIOO and Saicobab stands on its own, drummers in particular should listen to her kit work with the Boredoms. A great place to start would be the band’s 2004 album Seadrum/House of Sun, a typically sprawling Boredoms album that consists of two relentlessly percussive twenty-plus-minutes tracks. We interviewed the beloved member of the international alternative-music community through a translator, and very little of her charm and inspiring musical vision was lost in the process

MD: Your first music lessons were based on the Western listening and singing practice known as solfége. Do you think this early study still informs your music and drumming?

I don’t know if those classes have anything to do with it, but when I hear sounds from everyday life, the wind, waves, natural sounds, insects, and animal sounds, they sound like melodies to me, and I feel like I’m totally surrounded by music. When I play the drums, rhythms will emerge from inside of me, and when that happens, I naturally start singing. Vocalizing and playing the drums have a symbiotic relationship for me, and when I do both it feels like I’m giving myself a massage. 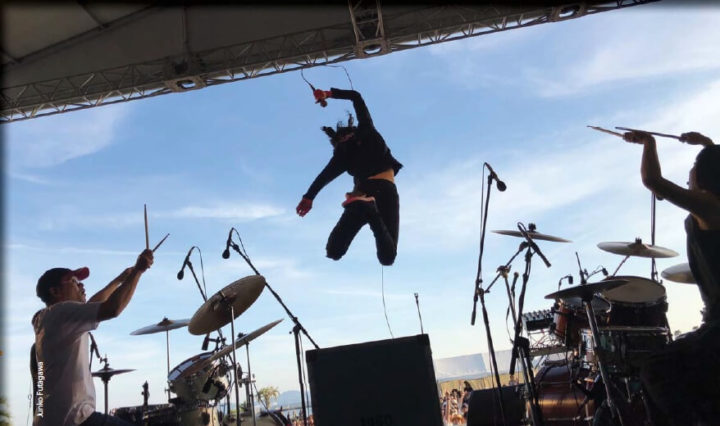 MD: Your first contact with the drums came from working with EYE in the band UFO or Die. Do you remember that first time you played a drum?

MD: Is it true that you don’t practice music outside of band rehearsal time?

YoshimiO: I never had the desire to practice my instrument so much that I would become one with the instrument. But I do love and respect musicians that are one with their instruments. The way that I become one with my instrument is by being in a state where musical ideas will pop into my head that are given to us by God. In order to do that, you have to become a vessel for the music and not be hindered by anything, not be attached to anything. So in my everyday life I’m always conscious of being completely relaxed and completely myself.

MD: Despite your lack of dedicated solo practice, you’re still a very accomplished composer, drummer, guitarist, pianist, improvisor, and singer. Is there something you can share with the readers about ways we can connect with our “natural musician” so to speak?

YoshimiO: I don’t have any advice I can give. I don’t think I have any accomplishments to speak of. I’m just being me.

EYE from the Boredoms always gets mad at me. He’ll plead with me and say, “If you don’t practice, you won’t be able to play my ideas. You don’t have enough technique, so please practice.” But I don’t know how to practice instruments. When I play an instrument that I have a connection with, all I’m trying to do is express myself through it. It’s not about ego but expressing yourself through an instrument; it’s about releasing any attachments you have about yourself. You observe what is emanating from inside of you, and you transform that into sound. In order to truly be yourself, you have to get rid of rules that things have to be a certain way, and not worry about what people think of you. If you have any of those notions, you can’t really be free in expressing yourself.

I think it’s all about how much you know yourself, and how true you are to yourself in your life. The methods you choose to reach that state don’t really matter.

MD: In a 2005 interview in Index magazine, you said that you do not think much about music unless you’re in the practice space. How is it that you can create so much music with Saicobab, OOIOO, and Boredoms?

YoshimiO: That’s true. Most of the members in OOIOO and Saicobab moved to the Kantō region [of Japan], so when we have rehearsals for shows or recording, I have to take a four-hour train ride from Osaka to meet with them. When I’m alone and riding on a fast vehicle like a train, that’s when I get the most ideas for compositions and melodies. I intentionally place myself in situations where I’ll be able to hear musical ideas in my head. For OOIOO, we’re lucky if we can get in the studio twice to rehearse before a show. As for the Boredoms, we need to rehearse a lot in order to be able to complete one idea. The only time I play instruments is when I’m rehearsing with one of my bands.

MD: When you create songs with the Boredoms and OOIOO, do you create demos with all the parts and you teach the band? How do your songs come about?

YoshimiO: If I have a certain polyrhythm I want to use in a song, I’ll explain that to the other members. They then interpret my ideas and play to the best of their abilities, so my initial idea naturally evolves into something else. When they start playing my ideas and I hear something interesting, I’ll make that part of the song.

MD: You say that you develop ideas on those long train rides to meet the rest of the band. Can you expand on this?

YoshimiO: Initially I don’t hear the ideas in my head. For example, with OOIOO, I’ll imagine what the color of our clothing should be for our next show, and then I’ll be able to visualize a setting that we’ve never played in, and I’ll be able to see ourselves playing onstage. Maybe I’ll imagine us wearing red costumes and playing in a beautiful green rice paddy. And then I’ll imagine, What kind of music would be cool if we played there? Then I’ll start hearing some strange music in my head. I will frantically try to listen to the music playing in my head and take notes. Then I’ll take that to the band and say, “Let’s play this music.” We’re just having fun. It’s nothing that serious.

YoshimiO: It’s a live recording. We toured throughout the U.K., but every night our improvisations changed, similarly to how the weather or the stars change constantly. I really dug deep into myself for these performances, and it felt like something new was emerging from within myself, so it was a surprise even for me.

MD: Before 77 Boa Drum [a live Boredoms performance in Brooklyn, New York, on July 7, 2007, that featured seventy-seven drummers], Boredoms were certainly an uncompromising band. But you still were a band in the conventional sense. After 77 Boa Drum the project grew and evolved into something more radical and unprecedented—and you embraced more and more drums. Why were the drums so essential to this transition?

YoshimiO: It would be best to ask EYE about this. I don’t feel like I’m in a position to talk about how the band has changed.

I’ve always played what I wanted to in the Boredoms in order to express myself freely. I joined in 1988, and for some reason I ended up playing drums in the band. I always wondered, Am I a drummer in the Boredoms? Looking back, it was a big shock when the guitar player and bass player that I loved left the band, and I couldn’t play with them anymore. The connection with those people was really important to me. But I discovered that the foundation of the Boredoms wasn’t destroyed. Later, EYE kept on coming up with new configurations and concepts without being bound to any rules. I always enjoyed playing in these different configurations, because I could express myself freely in them.

The band changed a lot visually, and I don’t think there were any bands back then that were mostly centered around drummers. The band’s foundation was always pure, and we were always doing what we thought was interesting and trying to experience sounds that we never had before.

I don’t see myself as just a drummer or musician in this band. Boredoms is an environment in which I can truly express myself. I feel blessed to be in this band. When I’m vocalizing, hitting the drums, or making any kind of sounds, I’m still playing in a band. That means that I’m going to be playing in front of somebody, but whatever the history there is in the environment that I’m playing in, it’s not about the ego. I feel the most joy when I play the sounds that naturally emanate from me, and when I feel that I’m one with those sounds. That’s when I truly feel free.

Although Yojiro Tatekawa (or “Yo2Ro” as written in Boredoms’ vernacular) could seem shy and unassuming in person, behind the kit he’s an absolute master. In Boredoms, he’s also a perfect foil for YoshimiO’s more natural, untutored playing. Tatekawa teaches drumset full-time at a school in Osaka, Japan, and is a dedicated student to the history and pedagogy of the instrument. Since joining Boredoms, he’s become an essential member, helping to craft and document the complex multi-drummer rhythms that help define the band’s trademark sound. Here we dive deep into three killer Boredoms tunes with the drummer.

Exercise 1 demonstrates the offset dual drumming patterns from the song “Super Going,” from Boredoms’ 1998 album, Super æ. The groove was created by accident in the studio when an overdub against a basic funk rhythm was displaced by two beats. The resulting combined rhythm features strong accents on every quarter note.

When Boredoms play this live, Tatekawa starts the sequence by accenting beats 2 and 4, and YoshimiO joins in after a measure, accenting beats 1 and 3. The groove combines a strong quarter-note pulse with the offbeat accents of both drummers, creating a complicated sound that only one drummer wouldn’t be able to replicate.

Tatekawa will often add some more complex figures to play against the basic “Super Going” beat, such as the variations found in the following examples.

YoshimiO and Tatekawa also play some fills inspired by Tihai, which is a polyrhythmic phrase found in Indian music that’s added to an existing pulse to alter the perception of the overarching beat. YoshimiO will play a Tihai fill, and Yojiro is able to catch the reference and respond immediately. They’re simple ideas but are highly expandable.

This unique groove is simple but a lot of fun to play. “Acid Police” opens Boredoms’ 1994 album, Chocolate Synthesizer, and typically ends their epic concerts. It’s relentless and is often played for twenty or even thirty minutes. It looks simple, but it is a brutal physical workout.

Although the group hasn’t recorded this song, it’s been incorporated into their live set for the last ten years. The beat is influenced by a Turkish pulse that Yojiro’s teacher taught him, and the drummer thought it would work well on the kit. 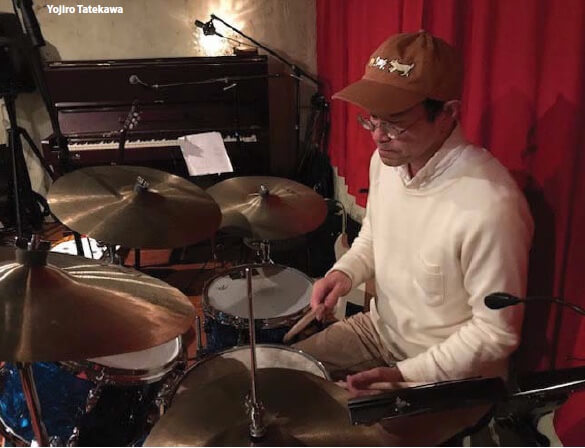