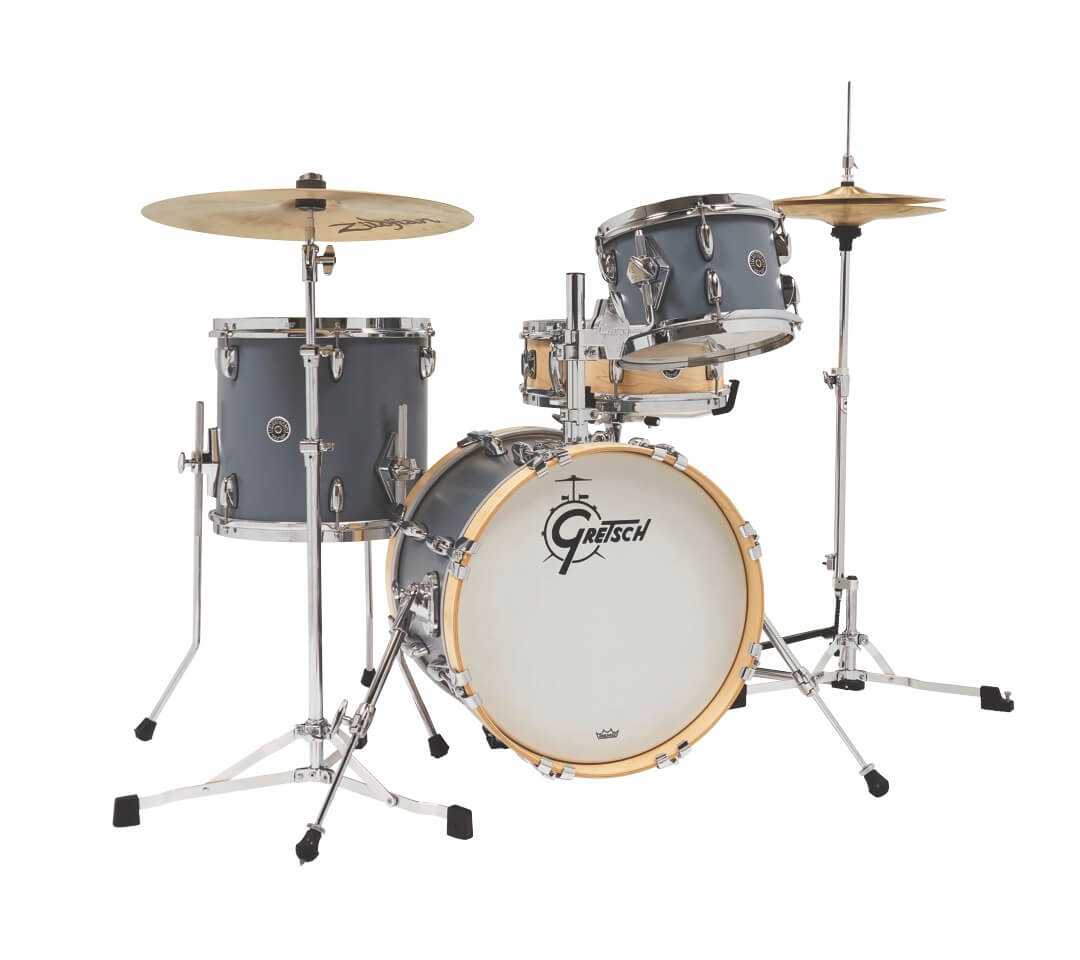 Super-compact but full-sounding drumset for tight setups and modern jazz/fusion or breakbeat situations.

The Brooklyn series is one of Gretsch’s most popular American-made offerings, largely due to having a more affordable price point without sacrificing the quality and timeless tones for which the company is known. Gretsch is able to keep the price of these handmade drums down by limiting the configurations and finishes. There is currently just one five-piece Brooklyn setup available, the GB-E8256, but the selection of four-piece offerings has recently expanded to five models, with the addition of the matte grey Micro Kit we have for review.

While the Brooklyn series shell is similar to Gretsch’s flagship 6-ply USA Custom, it’s a little thicker and is made from a blend of maple and poplar rather than maple and gum. The bearing edges are the same as they are on all Gretsch USA drums (30 degrees), and the interiors are finished with the company’s legendary Silver Sealer paint. These drums come with 302 hoops, which are 3 mm thick and are modeled after the double-flange design Gretsch employed until the mid 1950s, when it switched over to the thicker, firmer die-cast hoops that continue to be offered on USA Custom kits and on most of the company’s snares.

The mounting hardware on the Brooklyn Micro Kit is simple and sturdy. The five-lug 7×10 rack tom has a diamond-shaped bracket attached straight to the shell, and the six-lug 12×13 floor tom has three sturdy G4825 brackets and thick 12.7 mm legs. The spurs are Gretsch’s hinged, retractable G9013 model, and the tom mount is drilled directly into the eight-lug 12×16 bass drum shell. The GTH- SLC tom holder features a knurled L arm, a ball-and-socket angle adjuster, and an extra-long vertical post that can extend to place the rack tom about eye level when seated at the kit. The tom arm and post are locked into place with perfectly matched memory locks.

As a huge fan of jazz legend Elvin Jones and modern master Ari Hoenig, both of whom have used a 16” bass drum to great effect, I was very excited to try the Brooklyn Micro Kit. The first thing I did was test the upper register of each drum by tuning it as high as it could go while still producing a full, open tone. This ended up being a G minor arpeggio in first inversion, with the 10” tom tuned to the tonic (G), the 13” floor tom tuned to the fifth (D), and the snare tuned above the 10” to the minor third (Bb). The 16” bass drum tuned to Bb below the floor tom.

Even under a lot of head tension, each of the drums spoke clearly, fully, and with a pure pitch. The hefty 302 double-flange hoops controlled the decay of the toms and snare and provided a nice, cutting “crack” when used for rimshots. If you haven’t checked out Gretsch’s 302 hoops, they’re an ideal middle ground between the tight, focused punch of die-cast and the softer and more resonant tones that accompany common triple-flange rims.

The 16” bass drum came with coated single-ply heads on front and back, which gave the drum the more open and ringing sound associated with a floor tom rather than a contemporary kick drum. For jazz and solo drumming, this little drum was great for inspiring more melodic ideas that incorporated the bass drum seamlessly within the phrases. Again, Elvin Jones and Ari Hoenig, as well as creative drumming great Jack DeJohnette, came to mind as I explored this kit at higher tunings.

To explore the rest of the Micro Kit’s range, I backed off each drum by a minor third to achieve an E minor triad in first inversion (bass drum: G, floor tom: B, rack tom: E, snare: G). At this medium tuning, the snare took on an earthier quality, which is the sound that I most identify with the Gretsch drums used on my favorite Blue Note records from the ’50s and ’60s. The floor tom had a big, round, timpani-like tone, and the bass drum had more prominent low-end while still sounding very tonal. The rack tom wasn’t quite as sonorous as the other drums; its sustain became a bit more truncated at lower tunings. Maybe this is a result of its size, or maybe it has something to do with the five-lug design Gretsch uses on rack toms. Either way, the drum still sounded great; it just didn’t have the same fullness and openness as the snare and floor tom (both of which have six lugs).

Tuned a third lower, to a C# minor first-inversion triad (E, G#, C#, E), the Micro Kit became a lot punchier, with shorter sustain and a darker tonality. The bass drum had a more dissonant, papery tone, which I actually enjoyed, especially when playing breakbeat grooves in the style of modern jazz/fusion drummer Nate Wood and the experimental rock band Soul Coughing. The floor tom had a nice, vintage-style thump while still producing a pure, full tone. The rack tom had a shorter note but still spoke quickly, and the snare packed a nice old-school punch without losing tone or articulation.

While I preferred the brighter and more melodic sounds the Micro Kit provided at higher tunings, it’s a testament to Gretsch’s world-renowned craftsmanship when a tiny setup like this can be coaxed to produce such deep tones. 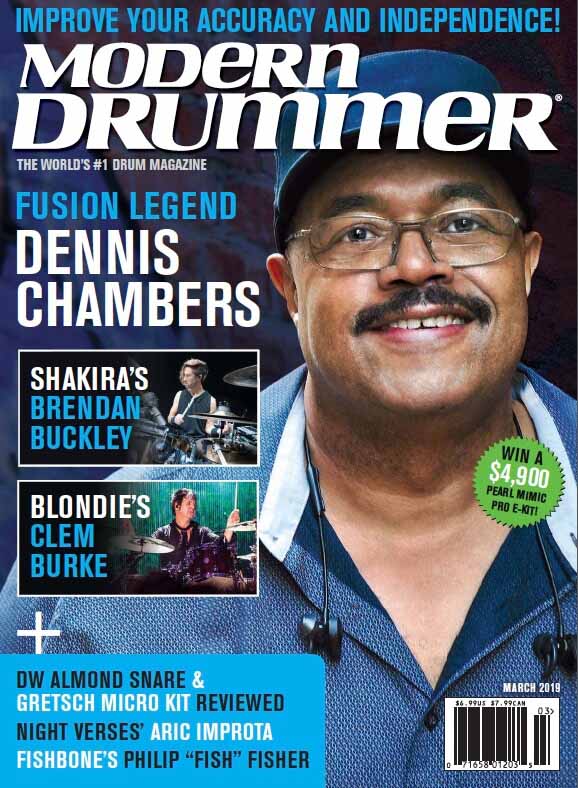 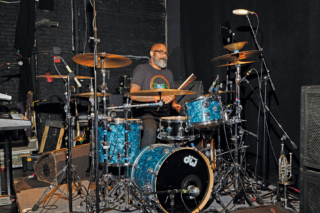 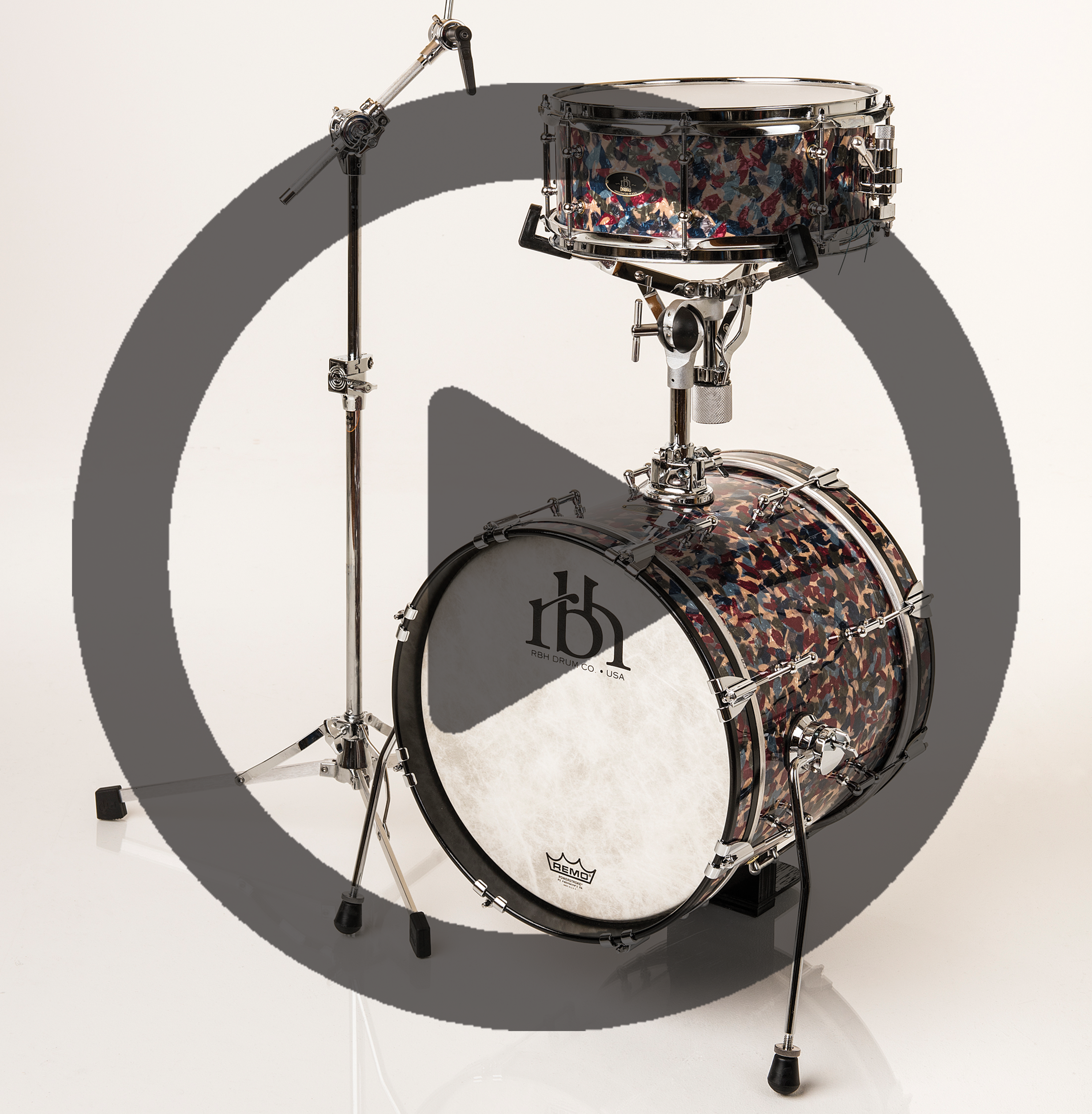 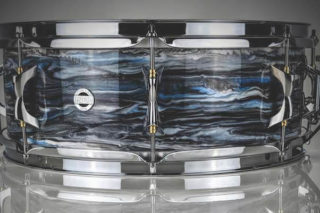 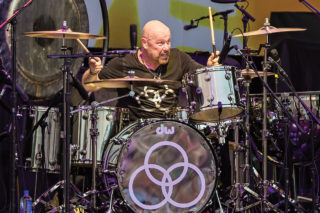