History tells us that the first drum star was Gene Krupa. Handsome, likable, energetic, with a near magical ability to bring dancers to the heights of ecstasy with barely more than a pounding floor tom, Krupa undeniably established the iconic image of the drummer as leader—not only of the band, but, in a sense, of all of us. He made us dance, he made us want to look at him, he made us want to play like him. He made us want to be him.

Of course, times change, and what we want from our entertainers does, too. The need for escape and celebration that the big bands of the 1940s provided eventually gave way to the public’s desire for more exploratory and reflective music, and in the ’50s and ’60s drummers like Max Roach and Tony Williams presented musical possibilities that we’re still grappling with today. In the rock era, players like John Bonham, Bill Bruford, and Neil Peart continued to prove that drumming was as profound as any other art form—though it could be argued that in terms of the wider public, it wasn’t until Phil Collins’ remarkably artful, prolific, and successful run in the ’70s and ’80s that the world at large was reminded of our awesome power. For us drummers, the sky really was the limit in terms of the influence that we could wield with a fertile imagination, a tireless work ethic, and a pair of drumsticks.

This month we’re featuring drummer Anderson .Paak on our cover. The Grammy-winning performer has seemingly come out of nowhere to capture the imaginations of music fans around the world—though, as is usually the case, his road to stardom has been longer and steeper than many are aware. Read his story; we found it fascinating, and we believe you will as well. Like Gene and Phil before him, Anderson’s performances on record, onstage, and on TV have sparked the imaginations of thousands of aspiring rhythmatists who can that much more easily see themselves playing that very same role of musical and cultural leader some day.

But as with all aspects of the musical life, it’s important that we regularly examine our feelings and beliefs about stardom. It has its purposes. It drives us as artists. It establishes a blueprint for what we can achieve. But it can also cloud our vision of what being truly influential means. Right now, across America, across Europe, across Asia and Africa and Australia, there are scores of “unknown” drum instructors who actually have a greater impact on aspiring players than the stars who appear on the cover of MD every month. After parents, teachers have the greatest influence on young minds. Full stop. They might never appear on television or at Coachella or even onstage with any artist that we’ve heard of. But, one-to-one, they show us how to use the best educational tools available, they provide an example of how to conduct ourselves in a professional manner, they steer us in the right direction in terms of what music we listen to and what gear we use…they show us what drumming means.

Stardom is important. If nothing else, it reminds us that people really do value our contributions as artists, and that the world really is our oyster. But let’s never forget how we got into this in the first place, and who put us on the right track. Because in each of our own little worlds, our teachers are bigger stars than anyone who comes before or after them in our lives. 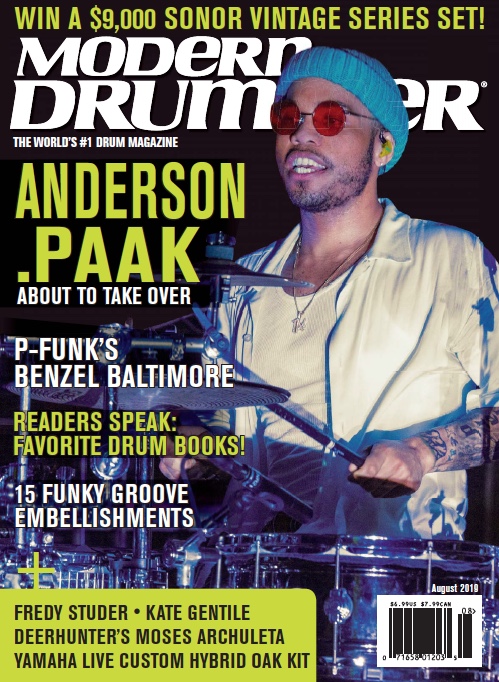 Every Drummer’s a Snowflake
By Adam Budofsky

Reflections of My Life
By Billy Amendola

Around and Around We Go
by Michael Dawson