Welcome to the MD Drummer portal for Joe Franco. Here you can explore both public and Modern Drummer exclusive content related to Joe Franco. Our drummer Portal features news, lessons, videos, *Magazine Articles, MD Products and more. Be sure to navigate to other drummer pages by selecting their name in the dropdown above or by clicking Drummers in the navigation menu.

Joe started his career in the clubs of NYC. He landed his first major gig in the mid 70’s with the New York band, Good Rats. After recording six albums and touring constantly, Joe went on to play with artists such as Chilliwack, Fiona, Twisted Sister, and Widowmaker. Between band gigs, Joe recorded and toured with guitarists Vinnie Moore, Blues Saraceno, Leslie West and legendary Cream bassist, Jack Bruce.

Besides his playing, Joe made a mark for himself in Music Education with the book and video, Double Bass Drumming. First published in 1984, the book is still used in many leading music institutes. Joe traveled the world performing drum seminars and wrote for the leading drum publications.

In the ‘90’s, Joe settled into a NYC session groove during which time he recorded with Mariah Carey, Celine Dion, Taylor Dayne, Diana Ross, Hall & Oates and many others. Besides his record projects, Joe started developing his compositional & production skills. Needing a home for his drumming and production work, Joe put together his facility, Beatstreet NYC in 1995 in New York’s Flat-Iron district. At Beatstreet, Joe played on albums for the band, Magellan, Steve Walsh (Kansas) among others. He has also produced and played drums on Eddie Ojeda’s (Twisted Sister) solo album and Dee Snider’s Van Helsing’s Curse.

The latest chapter of Joe’s career started when he was asked to play drums for the hit PBS TV series Between the Lions. The show was recorded at Beatstreet and besides playing drums and mixing the show, Joe composed the show’s segue music. This series led to many others and for the last 2 decades, Beatstreet has provided Music & Audio Post services for many popular children’s series including Sesame Street, Blues Clues and The Electric Company, which earned Joe an Emmy in Sound Editing.

MD Mag ArticlesMD Web NewsMD PodcastsMD Products
Note: Some MD articles are only available in pdf format. Those articles do not appear in this list. Subscribers to Digital and All-Access can view every Modern Drummer issue in their available formats. Browse all MD issues from our archive here.
July 2022:
Double Bass Drumming

Continuing from last month’s re-introduction of Joe Franco’s classic book Double Bass Drumming, and his concept called the Single Stroke System. Here is Joe’s chapter on Sixteenth Note Double Bass Patterns. There are many more patterns and beats included in the book. Here are the different one beat patterns that …

Today, many drummers are playing complex rhythms with their feet that some drummers struggle to play with their hands. The speed of the extreme double bass drumming heard in modern (speed, black, and death) metal bands is astounding. Many younger drummers want to start out by playing along to this … 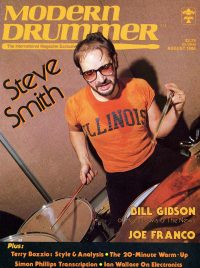 At a recent concert held at the Ritz the prestigious New York club, a crowd of enthusiastic fans was on hand to check out Atlantic recording artist Fiona. The band performed an exciting set of powerful hard rock. Near the end of the set, the spotlight went to the drummer, …

Category: Drummers, On the Beat
On The Beat with Ray LeVier: Talks Projects and New Solo Record

Hey Modern Drummer readers, what’s up? My name is Ray LeVier and I’m a touring drummer, composer, and studio owner from West Nyack, NY. I would like to start off by saying I’ve been a MD reader ever since I first picked up a pair of sticks.

Brian Tichy brings Bonzo Bash back to Bergen PAC in New Jersey on May 31 to celebrate the legendary drumming of Led Zeppelin’s John Bonham….

Brian Thomas Tichy and his partner Joe Sutton have decided to bring the Bonzo Bash/John Bonham celebration to New York and New Jersey for three shows. The shows, co-sponsored by Modern Drummer, have been booked for May 30, May 31, and June 1 to pay tribute to John Henry Bonham …

Since moving to New York in 1996, Allison Miller has thrived by refusing to acknowledge musical borders. Alli, as she likes to be called, has allowed her sincere love of pop and rock music to ground her jazz playing–and her passion for jazz to elevate her pop prowess….

I’ll start by saying, What an amazing five days I recently had—Rock ‘N’ Roll Fantasy Camp promoter David Fishof is a genius! This past August 13–17, I was invited to the sixth Camp in New York City; my second as a guest and my first as a Battle Of The …

When your first major tour includes a make-believe club date performing for surrealist director David Lynch and actor Nicolas Cage, you know your career has taken an unorthodox turn….