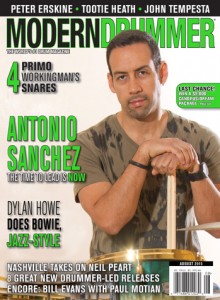 Welcome to the MD Drummer portal for Antonio Sanchez. Here you can explore both public and Modern Drummer exclusive content related to Antonio Sanchez. Our drummer Portal features news, lessons, videos, *Magazine Articles, MD Products and more. Be sure to navigate to other drummer pages by selecting their name in the dropdown above or by clicking Drummers in the navigation menu.

Since moving to New York City in 1999, Antonio has become one of the most sought-after drummers in the international jazz scene. Following 20 years and 9 albums as one of the most revered collaborators with guitarist/composer Pat Metheny, he also has recorded and performed with many other most prominent artists like Chick Corea, Gary Burton, Michael Brecker, Charlie Haden and Toots Thielmans.

In 2014 Sanchez’s popularity soared when he scored Alejandro González Iñárritu’s Birdman or (The Unexpected Virtue of Ignorance) which ended up fetching 4 Academy awards (including best picture) and for which Antonio won a Grammy award. Additional film/tv projects include 3 seasons of EPIX network’s Get Shorty, Harami, Hippopotamus and the 6 part HBO Docuseries The Anarchists.

Sanchez currently has close to a dozen recordings as a leader and solo artist. His recent projects to date include the critically acclaimed, through-composed epic The Meridian Suite, the star studded album Three Times Three, Grammy nominated Bad Hombre —a sociopolitical electronica & drums exploration, Channels of Energy, an ambitious project with the WDR Big Band with arrangements of his works by Vince Mendoza and Lines in the Sand with his band Migration. Here Sanchez turns his political anger into a moving musical statement of epic compositional proportions as much a protest against injustice in our current political climate and as a tribute to every immigrant’s journey.

To date Antonio has been awarded 4 Grammys, nominations for Golden Globe & Bafta Awards, wins for the World Soundtrack New Artist Discovery and Best Original Film Score Award, 3 Echo Awards (Germany), Hollywood Music in Media Award, the Critics’ Choice Movie Award and 4 Modern Drummer’s Drummer of the Year Awards in the Jazz and Fusion categories among many other wins and nominations. He has been the featured cover artist for DownBeat, JazzTimes, JAZZIZ, Modern Drummer (twice), Drum!, Musico Pro and Drumhead among others.

MD Mag ArticlesMD Web NewsMD Podcasts
Note: Some MD articles are only available in pdf format. Those articles do not appear in this list. Subscribers to Digital and All-Access can view every Modern Drummer issue in their available formats. Browse all MD issues from our archive here.
September 2022:
Modern Drummer 2022 Readers Poll Winners

It is time to announce the winners of the 2022 Modern Drummer Readers Poll. Congratulations to all of the winners, and thanks for your artistry and contributions towards the history and evolution of modern drumming. Thank you for your recordings, concerts, clinics, shows, books, videos, articles, and everything else that …

Celebrate Your Choices for the Extraordinary Drummers of the Past Year It’s that time again for the Modern Drummer staff to thank the community for making possible our annual Readers Poll. Your enthusiasm for all things drumming, your knowledge of drum culture, and your well-considered votes are what have steered …

Haken Virus The U.K. prog-rock sextet’s latest album may adhere to a lyrical narrative, but according to drummer RAY HEARNE, they’re still dedicated to evolving their sound. Embracing the mystery of their curious Cockroach King character, Haken’s new release, Virus (Inside Out Music), completes the storyline begun on their 2013 …

September 2020:
BACK THROUGH THE STACK

Drums…gymnastics…everything I picked, I got really obsessive with. So now that I’m writing and I’m a bandleader, I’m obsessive with that. That obsessiveness helped me a lot when I was getting my stuff together. And, you know, back then there was no YouTube, and in Mexico we were isolated in …

Some of the worlds greatest drummers and industry members share their memories of what Neil Peart has meant to them. 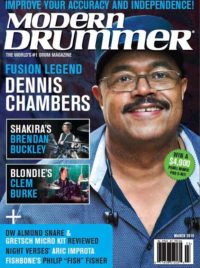 Still riding the massive spurt of creativity he uncovered on David Bowie’s Blackstar, the saxophonist channels 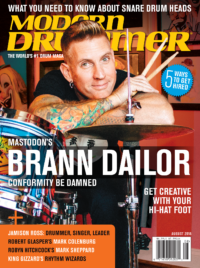 Following on the heels of his Grammy-nominated drums-meets-electronics tour de force, Bad Hombre, the amazing Antonio Sanchez takes a left turn into a big band setting. Early in his career, Sanchez toured with Dizzy Gillespie’s United Nations Orchestra, and always hoped to further explore that format. On this thrilling double … 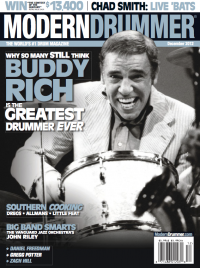 When Buddy Rich took charge behind the kit, the air crackled. Buddy aimed to excite, to give audiences their money’s worth with precision, sophistication, and world-class quality. 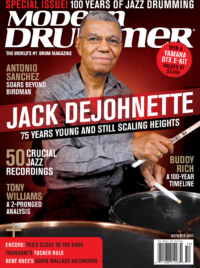 The success of his unique film score blew open the doors of perception for many a curious drummer. His latest projects are no less exploratory— or inspiring.

Jazz in the 21st Century

Many scholars argue that jazz, which was first documented on record one hundred years ago by the Original Dixieland Jazz Band, is America’s greatest musical gift to the world. I couldn’t agree more. I mean, what other art form encapsulates the messy, diverse mix of cultures that makes up our … 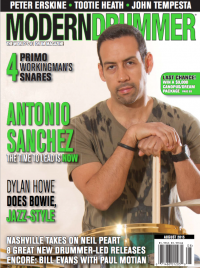 On the Cover – Antonio Sanchez

On The Cover Antonio Sanchez Circling the globe backing masters of jazz helped him develop fearsome skills and a crystal-clear vision for his art. Now it’s time for him to let his own music light the way. Story by Michael Parillo Photos by Rahav Segev At the March album-release show …

Jazz Drummer’s Workshop Antonio Sanchez The Meridian Suite by Terry Branam Contemporary drumming giant Antonio Sanchez’s The Meridian Suite takes the listener on a spectacular journey through a nearly hour-long composition that’s divided into five parts. This epic long-form piece features some of Sanchez’s most refined yet most adventurous playing … 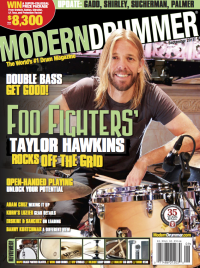 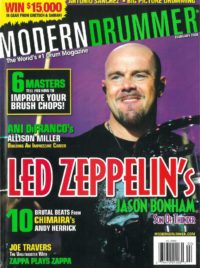 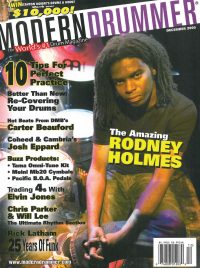 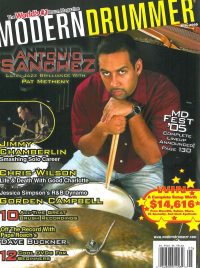 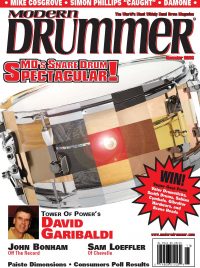 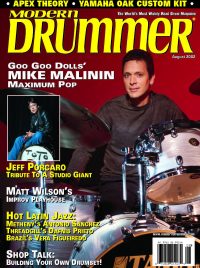 Modern Drummer Magazine today announced an exclusive distribution partnership with Yurt Rock, a widely-recognized producer of loops, samples, and more featuring the world’s leading musicians. As part of this exciting collaboration, Yurt Rock will be releasing a series of custom drum libraries from Modern Drummer’s digital catalog. The first release planned will …

Category: Drummers, On the Beat
On The Beat with Luis Campos of Delux: Talks Albums and Projects

Hi world, my name is Luis Campos. My friends call me “Chocs” and I’m originally from a small town in Culiacan, Mexico. I’ve been living in Los Angeles for about thirteen years and have been drumming around eighteen years. I became a drummer because of Pearl Jam drummer Dave Abbruzzese.

Category: Drummers, On the Beat
On The Beat with Jacobi Gunter: Doing What I Love To Do!

Hello Modern Drummer universe, I am Jacobi Gunter from Columbia, SC and this my inaugural post. I am so hyped yet humbled to share my phenomenal journey with you all here “On The Beat.” I’ve been told that my first performance was at eighteen months old, but my earliest memory …

Multi-instrumentalist, composer, and bandleader Mehmet Ali Sanlıkol recently released Resolution. It’s the follow-up to his 2014 album What’s Next, a name that also applies to his shape-shifting jazz orchestra, which can be pared down to a combo, depending on his needs. Sanlıkol writes in both contemporary classical and jazz styles …

Watch this video with Jay Postones of TesseracT as he demonstrate “Dystopia??? from the brand-new Polaris Album….

See what’s in the pages, and where to order, the August 2015 Issue of Modern Drummer magazine featuring Antonio Sanchez!

A intimate trio setting can be especially suitable to a drummer who has masterful control of the “small??? notes. This is such a setting, and Antonio Sanchez is such a drummer….

Hello, Modern Drummer readers! It’s been a while since I last checked in from “the North Woods.??? I see all is great in drum land—so many amazing new talents every day!

The results are in for the longest-running, most prestigious drummer poll in the world. Without further ado, here are your winners for 2013….

Category: Drummers, On the Beat
Mack Longpre of Chloe Charles

Greetings from Toronto! My name is Mack Longpre. I’m a twenty-four-year-old drummer and baseball enthusiast who holds Tim Horton’s coffee and baked goods close to my heart. I’d love to take this opportunity to share a bit about myself and to talk about the people who have helped, taught, and …

The sixth annual Croatia Drum Camp will be held this August 5-12 at the Jeunesses Musicales International World Meeting Centre in Groznjan, Croatia. The picturesque backdrop of this 14th-century Mediterranean hilltop village overlooks sprawling vineyards surrounding the Adriatic Sea, making the camp one of the most unusual and geographically attractive …

Click here to check out a video of Jazz Drummer’s Workshop columnist Steve Fidyk explain many of the exercises in his “Swingin’ the Clave” article.

Category: News, News and Events
D’Arcus Curry, Angieszka Matusczak, and Karmi Santiago Announced as Winners of Hit Like A Girl 2012

The sponsors and supporters of “Hit Like A Girl 2012??? are proud to announce the winners of the first ever drumming contest for girls and women. (read more)

Hey guys, this is Matt Covey of Shai Hulud, the Suicide Dolls, and the Flaming Tsunamis. And the Hempsteadys. And the Franklin Brothers…and Young Pandas. About three and a half years ago, I was shocked to find myself on the road playing drums for a truly pioneering band….

For intermediate and advanced jazz musicians, all instruments (limited enrollment) — Event to be held August 20-24, 2012, The Spa at Norwich Inn, Norwich, CT– The National Music Workshop is proud to announce the 2012 Pat Metheny Summer Music Workshop. World-renowned guitarist, composer and bandleader Pat Metheny will return to …

Mitch Mitchell was not alone in blending jazz and rock drumming styles, but he may have pushed the combo further than anyone who came before him. Here a number of noted drummers provide further insight into Mitch’s influence….

Category: Drummers, On the Beat
Tony Nesbitt-Larking with The Most Serene Republic

With our new CD, Population, hot off the press, and with the backing of Yaris and Arts & Crafts, we hit the road last October for a two-month mega-tour across Canada and the US.

Best known for his multi-timbral, multi-textural, orchestral jazz drumming with The Pat Metheny Group, Antonio Sanchez spreads his solo sticks wide for his debut as a leader, Migration….

In this episode, Johnston talks about his recent trip to Ireland to teach a drum camp with fellow drummers Mark Guiliana and Robert “Sput??? Searight. Then Mike and Mike discuss August 2015 Modern Drummer cover artist, modern jazz great Antonio Sanchez. Next, Dawson digs a little deeper into the Fidock …