Curtis Mayfield was unlike any other soul artist, and the job of servicing his timeless grooves was a unique challenge, especially during the dawn of electronic drums. The journeyman player who helped bring Mayfield’s message of peace and harmony to thousands of international fans in the ’80s—and who still lays it down strong today on the busy Atlanta scene—provides insight.

It’s the late 1980s, and a roaring crowd is dancing, singing, swaying, and sweating to a breakneck groove as the legendary Curtis Mayfield’s voice “moves on up” into the stratosphere. Atop a syncopated bed of funk and soul, his lyrics speak of societal strife, social responsibility, and the struggle for equality. Mayfield is a beacon of light representing true change for the better, both musically and socially.

With the Impressions in the ’60s, Mayfield poetically and unabashedly addressed tense race relations and inequality with a string of beautifully arranged hits including “People Get Ready,” “Keep On Pushing,” and “Amen.” In his solo work of the ’70s, he helped define wah-wah-drenched funk music while decrying drug use and street crime with his soundtrack to the movie Superfly. And in the ’80s, while still writing and recording prolifically, he adopted the multiracial band Ice 9 as his touring group. In the summer of 1990, Mayfield’s life was permanently altered by a falling stage light, paralyzing him from the neck down and effectively ending his career as a performer. But at the aforementioned ’80s show, as the crowd soaks the music in, the singer/multi-instrumentalist and Ice 9 play like there’s no tomorrow. Mayfield breaks the band down as he introduces the drummer who “plays as sweet as his name,” Mr. Lee Goodness.

Today, Goodness still plays just as sweet. Since his stint with Mayfield, which included multiple tours of the U.S., Japan, and Europe, Goodness has become a staple of the Atlanta scene as an audio engineer, studio owner, and prolific player. He sat down with Modern Drummer to share his life story and lessons learned.

MD: You’ve always had certain jazz elements in your drum sound. Did you start by playing jazz?

Lee: Well, I liked jazz even before I started playing drums. But when I did start playing, it was all rock stuff. I saw the Beatles on Ed Sullivan and thought, I’ve got to do that. Then it was the Stones, Hendrix, Zeppelin. The harder, the better. Then, as I got better at playing, I progressed back into the jazz thing. I think I heard Herbie Hancock, Chick Corea, and Weather Report all within about a week of each other. I quit the band I was in and just played fusion! It was a complete 180 as far as what I wanted to do and what I listened to.

Ice 9 was actually a fusion band when I first joined them. In order to work, our repertoire kind of devolved into Top 40 music, and we did that for a long time. But Ice 9’s bass player, LeBron Scott, was Curtis Mayfield’s nephew, and LeBron told him about us. So Curtis came to check us out, and I guess we passed the audition.

MD: What do you think stood out about Ice 9?

Lee: There’s a funny thing that helped us. I was playing Simmons drums, because that was a real prominent sound at the time, and Curtis loved that sound. I think I had the SDS 8s, which weren’t quite as versatile as some of the higher-end versions—but they worked.

MD: Based on the subtlety in Curtis’s arrangements, I’m surprised to hear you say that.

Lee: It actually became a huge problem once we started touring. I didn’t think they’d be dynamic enough for his music, and I was absolutely right. It was a huge pain in the ass! I had a different setup virtually every night, so I was learning how to use the different electronic kits on the fl y, trying to keep my sanity. On the next tour I had an acoustic kick drum, acoustic snare drum, and electronic toms. That was a little better, but I quickly changed to purely acoustic drums.

MD: Was Curtis particular about the drum parts?

Lee: He had the concept of all the grooves from writing the tunes and performing them for years. But to me, the thing he wanted was the dynamics. Curtis was a very quiet singer—tons of emotion, but he didn’t belt it out. You had to play in back of that, but you still had to cook. You had to have energy; you had to have feeling. There were specific drum parts that had to be there, but most of his music is based on the bass line and the percussion, not really the drums. The percussion is very prevalent.

MD: You were on the road with “Master” Henry Gibson, the percussionist who played a lot of those original parts.

Lee: Henry was just amazing. He was a big session guy in Chicago, and then he was with Curtis for years. I had to just lay it down for him. I had a solo in “Move On Up” and a couple of breaks here or there, but most of it was just staying in the pocket, keeping good time, and letting him do his thing. After the first three tours I did, he met a girl in Europe and decided to stay there.

MD: Were you trying to replicate the parts from the studio recordings?

Lee: Well, I never experienced what his drummers did in the studio on all those other cuts. But I would learn the part, and as we played the song I’d figure out where the dynamics needed to be. Let’s take “Superfly.” That comes on pretty strong when the song starts, then it breaks way down for Curtis’s vocals and goes back up again in the transition into the chorus. It’s almost like playing jazz, when you play the head and then break it down for the solos, then follow the soloist and build his solo up to a climax, and then come down for the next guy. And there was room to play within the song. You didn’t have to play the same part every night. You had to keep the same feel, but there was room to improvise.

MD: How did you originally get into music?

Lee: I started on clarinet. I wanted to play drums, but my parents said, “That’s too loud! Pick something else.” So I said, “How about saxophone?” They said, “No, you need to start on clarinet first.” So I did that and then switched to saxophone. When I got out of high school, I figured it was about time I could play some drums. I wasn’t at home anymore and had no one to tell me not to, so I started drumming. I’ve been doing it ever since.

MD: Did you have a teacher at the time?

Lee: No, I took lessons on clarinet and sax, but I’m actually completely selftaught on the drums. I’ve got really good ears, and if I hear something the first time, I usually pick it up by the time it comes around again. I’ve been able to survive playing gigs like that pretty much the whole time.

MD: So you flew into it by the seat of your pants.

Lee: I mean, obviously when you start off and you’re in a band, everybody rehearses and you learn the song, and then you go play gigs. But as I got older, a lot of the time you just show up and meet the people you’re playing with for the first time. You just listen, jump in, and hang on!

MD: The arrangements on your album All In are all very jazz influenced.

Lee: When I decided to do my record, I asked my cousin Victor Acker if he would help me. A lot of the arrangements I did, and some of the arrangements he did. I mixed the whole thing, and we coproduced it. All the drums as well as a couple of piano and sax parts were recorded here in my studio, while Victor and other musicians did their stuff in Boston.

Lee: I think that’s really important. You have to play the song. It’s not always about drums, or screaming guitar. I left myself a little room; there’s a little solo on the Latin piece, “Seven Steps to Heaven,” and a solo drum piece at the end. I had a friend named Sean Costello that passed away unexpectedly, really way too young, and I went to his funeral. He was a great guitar player, singer-songwriter—just a really good musician. I came home, went to the studio, turned everything on, and just started to play, and that’s what happened. It was kind of my way of saying goodbye to him, and that’s “Blues for Sean.” The other cuts are my interpretations of some of my favorite songs from over the years.

MD: What projects are you working on currently?

Lee: Right now I’m playing with a blues trio in Atlanta, Billy George and Mo’ Lightnin’. I like it a lot because Billy really reminds me of Curtis as far as the raw, self-taught thing goes. He’ll change where 1 is in a heartbeat, but the feeling is there, and it’s fun. We’ll open it up and play it a little more jazzy than the classic blues band would do. The songs just evolve the more we play them. We’re going to start writing together very soon.

MD: Can you leave us with some final advice for up-and-coming drummers?

Lee: Well, you’ve got to play with the bass player and the singer. A lot of times you might want to accent a certain word or a certain inflection, and you need to set up different parts of the tune as it progresses. And of course dynamics. It’s got to breathe; it’s got to have life. You can’t play balls to the walls all the time, especially with someone like Curtis. That was the most demanding thing for me, following his dynamics, and it was fun. I mean, if you want someone to pay attention to you, play quiet. I’m serious! [laughs]

So Sweet, and Cool as Ice
You can check out Lee Goodness grooving with Curtis Mayfield on a number of tour documents, including the CDs Live in Europe and Live at Ronnie Scott’s and the DVD Live at Montreux 1987. 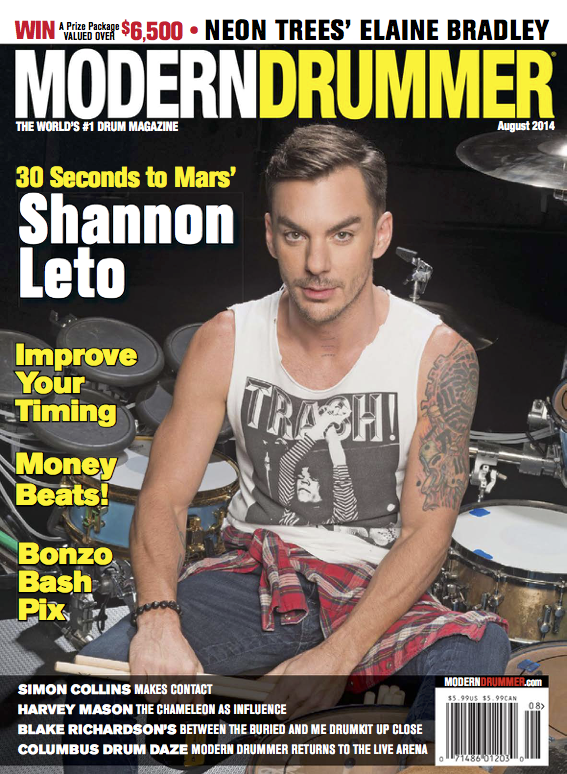 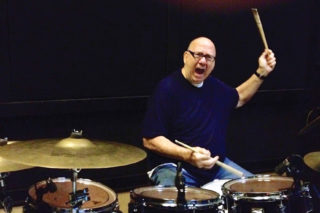 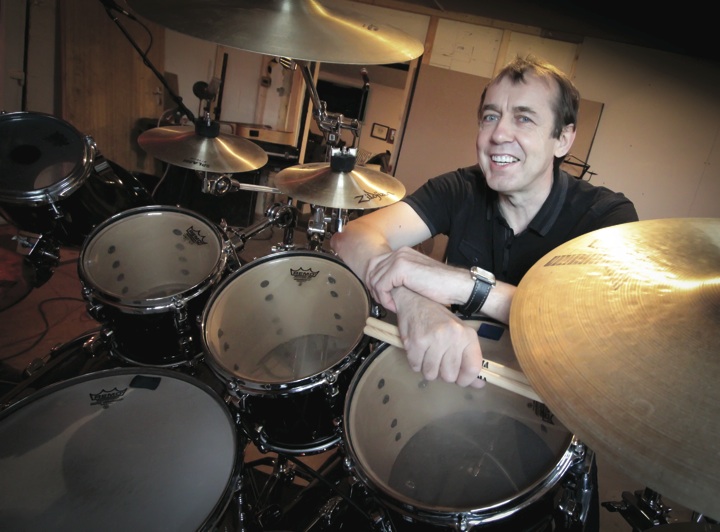 What Do You Know About…Mark Brzezicki 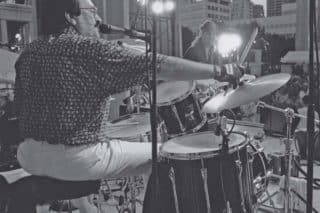 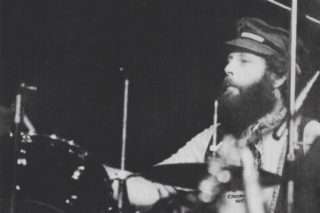 Bruce Rowland
by Will Romano