This month’s Jazz Drummer’s Workshop features some of my favorite applications of the classic George Lawrence Stone book Stick Control. The exercises utilize the “72 Single Beat Combinations” found on pages 5–7, and they could also be applied to the “missing” examples from the book that we covered in last month’s Strictly Technique article.

I was privileged to work through Stick Control with Joe Morello. Joe was Stone’s star pupil, having studied with him throughout the 1940s. At his lesson with Stone each week, Joe would bring in variations based on the original written exercises. (These would later become the impetus for Stone’s follow-up book, Accents and Rebounds.) In my lessons, Joe encouraged and inspired me to be creative and come up with my own variations, especially on drumset.

The first exercise comes from a former student of mine, Scott Drewes. This example works great as a warm-up or as a concept for fills around the kit. Begin with Example 1 in Stick Control, and alternate between your hands and feet using quarter notes.

Once you have that down, repeat the pattern using swung 8th notes, 8th-note triplets, and 16ths. Then move through the different examples on page 5 of Stick Control. Stone’s Example 5, the paradiddle, is an alternating rudiment, meaning it starts with the opposite hand in the second measure. As you apply this first drumset approach with sticking patterns that alternate, your upper and lower appendages will also alternate.

To use this pattern as a transitional fill, play two measures of time followed by combinations of Stone’s stickings and various subdivision ideas voiced around the drumset. The exercise below uses Examples 13 and 15 from page 5 voiced
as 8th-note triplets and 16th notes. 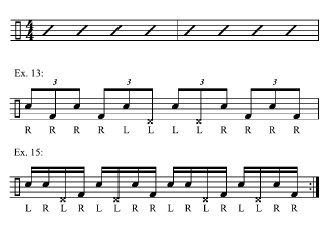 Once you have control of that new pattern on the snare, try moving the accents to the toms, and add basic bass drum and hi-hat accompaniment.

Next, read down the column to create four-bar patterns using this application. Here is the first measure of Examples 45–48 from page 6. 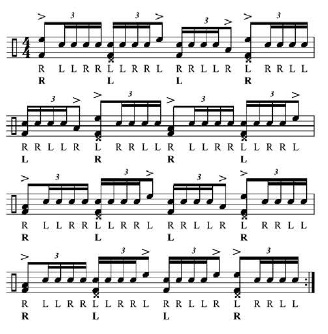 Here are the seven triplet partials.

Here’s Example 49 from page 7, using the second triplet as the substituted rhythm.

To develop finger control and dexterity, substitute a right paradiddle for every R and a left paradiddle for every L. When you practice this, separate the hands on two surfaces, such as the ride cymbal and snare drum. Here’s the first measure of Example 62 from page 7, played using this approach. The hi-hat is on 2 and 4 throughout.

It’s also fun to interpret Stick Control in a samba style. Try the following ostinato for your right hand (without a stick) and feet.

Now play each L sticking in Stone’s patterns with your hand on the snare drum with the snares off. Below is Example 67 from page 7.

Finally, try interpreting the written 8th notes in Stick Control with a swing feel using brushes. Play every R with an open tap sound with the right brush and every L with a circular sweep with the left brush.

As you work through the applications, concentrate on your pulse and pay attention to the sound across your four limbs. Work out each sticking variation with a metronome, or play along to your favorite recording. Practice at a wide variety of tempos, from very slow to very fast. Be creative and come up with your own unique variations.