Welcome to the MD Drummer portal for Nate Morton. Here you can explore both public and Modern Drummer exclusive content related to Nate Morton. Our drummer Portal features news, lessons, videos, *Magazine Articles, MD Products and more. Be sure to navigate to other drummer pages by selecting their name in the dropdown above or by clicking Drummers in the navigation menu.

Self-taught from age 5, Nate’s formal drum set training began during high school with Grant Menefee in Baltimore, Maryland. He continued his education in Boston, Massachusetts as a performance major at the renowned Berklee College of Music, studying with drummers such as Ed Uribe, Ian Froman, John Ramsay and Ron Savage. Upon graduating in 1994, he taught and played locally in Boston until moving to Los Angeles in 1999 where he has since amassed live performance and recording credits that include Natalie Cole, Michael Bolton, Madonna, Miley Cyrus, Richard Marx, Paul Anka, Paul Stanley, Pete Murray, Pink, Paulina Rubio and Thalia among others. Nate was also the hard hitting force, driving the house band, on the Mark Burnett shows, ROCKSTAR:INXS and ROCKSTAR:Supernova.

In 2010, he was the house band drummer on Bonnie Hunt’s day time talk show, as well as performing with Cher during her residency at The Colosseum at Caesars Palace. Now, you can catch him grooving during prime time on the NBC hit show, THE VOICE.

Nate cites Animal from The Muppet Show as his first and biggest influence. “The bottom line is, I hit things with sticks for a living, and that’s a pretty fun job.”

MD Mag ArticlesMD Web NewsMD Podcasts
Note: Some MD articles are only available in pdf format. Those articles do not appear in this list. Subscribers to Digital and All-Access can view every Modern Drummer issue in their available formats. Browse all MD issues from our archive here.
September 2020:
Beats and Fills

A Smattering of Favorites from a Few Top Pros This month we’ve gathered a collection of favorite beats and fills from some of the top drummers in the world.Each of these transcriptions was pulled from a Modern Drummer exclusive video lesson that was filmed at DrumChannel.com. Gregg Bissonette: A Ringo … 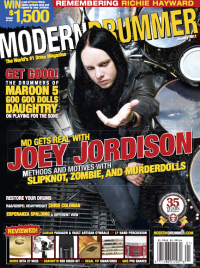 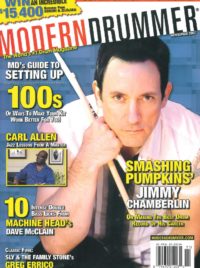 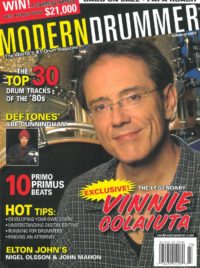 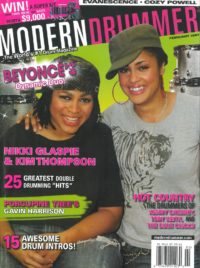 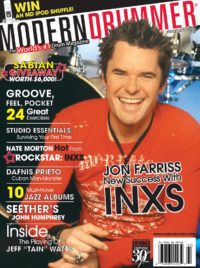 Watch the The Making Of: Omens Premiere Live Stream Event October 6 Omens Album Drops October 7  The Omens Tour Kicks Off September 9 Photo by Travis Shinn at Henson Studios LAMB OF GOD announces The Making Of: Omens, a short film documenting the recording of their forthcoming album. The documentary will premiere with …

Self-taught from age 5, Nate’s formal drum set training began during high school with Grant Menefee in Baltimore, Maryland. He continued his education in Boston, Massachusetts as a performance major at the renowned Berklee College of Music, studying with drummers such as Ed Uribe, Ian Froman, John Ramsay and Ron …

Rich Redmond is hosting a Drummer’s Weekend in Los Angeles on April 8 to 10. The three-day immersive education event takes place in the heart of Hollywood and features twenty-four total hours of hands-on training with some of the greatest drummers on the planet.

Due to deadlines, Nate Morton wasn’t able to complete his behind-the-scenes journal about his unique job drumming on the hit television talent show The Voice before his cover story was published in the June 2014 issue of Modern Drummer. Here’s his final entry….

Since “retiring??? from touring, after a long-lasting run with Nickelodeon’s Big Time Rush, I’ve been refocusing my career at home in Los Angeles, CA.

Category: Drummers, On the Beat
Nate Morton of The Voice

Hi, MD readers. I thought I had faced musical challenges and done difficult gigs. And I believed I knew what it was like to learn a large amount of material in a short time—recording ten songs in a day seemed like a lot, and a ten-hour day was long. But that …

Category: Drummers, On the Beat
Nate Morton with Cher

Hey, everybody, Nate Morton here with a quick update. I’ve been performing with Cher in Las Vegas at Caesars Palace, and the performances have been amazing, truly an extravaganza! I’m often asked what it’s like working with Cher, and the best response I can think of is, she is exactly …

Cozy Cole, an incredibly adept player, was strongly rooted in the rudimental style, but he contributed much to jazz drumming…

In celebration of the great, sometimes groundbreaking drumming performances of TV’s golden age, we present to you highlights along the illustrious Drumming On TV timeline…

Just wanted to throw a couple things out there. I'm about to find myself back on television again, playing in the house band on The Bonnie Hunt Show.

In this episode, Mike and Mike discuss how they structure a student’s first few drum lessons, and they talk about German drummer Claus Hessler, who is featured in the June 2016 issue of Modern Drummer. In the gear review section, the hosts talk about some cool solid-shell snares from relative …