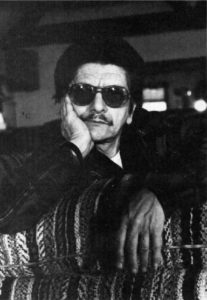 
Gary Chester is one of the most recorded drummers of our time and author of a drum book best-seller, The New Breed. Although Gary passed away in 1987, his legacy lives on through his musical contributions and through the people he has taught or inspired around the world. Gary’s book The New Breed is very special. It is his recipe for success that was developed over many years, playing more than 14,000 recording sessions and countless performances. Other books are more like “workbooks” – very useful and important. The New Breed is not a workbook. The NB carries with it a philosophy for drummers and for drumset. Most importantly, The New Breed system is for creators who want to become innovators. NOW, for the first time since his passing, aspiring drummers have the incredible opportunity to tap directly into the lineage of Gary’s teachings by being paired directly with a New Breed Approved teacher! Watch some of them in the video lesson series “Students of the Master, Teach One2One!” by scrolling to the drum lessons tab below.

Gary was a unique drum teacher. He played on over 14,000 recording sessions, more than that, producing many hit records in the late 50s, 60s and 70s in New York City’s Brill Building era. “The Brill Building was the action spot of the music biz…like walking into the tower of song. It was a music factory on every floor. “Hard to imagine today that we could walk from office to office and see the guys actually writing the hits,” writes singer/songwriter Paul Anka in his autobiography. If you listen to classic rock and pop music, it’s hard to go through a day without hearing Gary Chester’s drumming.
Van Morrison’s “Brown-Eyed Girl,” Ben E. King’s “Stand By Me,” The Monkees’ “I’m a Believer,” Dionne Warwick’s “What the World Needs Now,” The Chiffons, “He’s So Fine,” Petula Clark, “Downtown,” Jim Croce, “Bad, Bad Leroy Brown,” John Denver’s, “Rocky Mountain High,” and The Drifters’ “Up On the Roof.” These hits barely scratch the surface of Mr. Chester’s body of work.
Gary Chester on the USA East Coast, and Hal Blaine on the West Coast were the session drummers on a majority of the pop hits of the late 50s, 60s and 70s. Gary played on over 14,000 sessions including hits such as The Chiffons (“He’s So Fine”), Petula Clark (“Downtown”), the Drifters (“Up on the Roof,” “Under the Boardwalk”), the Isley Brothers (“Twist and Shout”), Ben E. King (“Spanish Harlem,” & “Stand By Me”), Dionne Warwick (“Walk On By,” “Do You Know the Way to San Jose,” “I’ll Never Fall in Love Again,” “Say a Little Prayer”), and Van Morrison (“Brown-Eyed Girl”) along with many, many more.
From age five until 13, Gary was a poor Italian kid in the Bronx, New York City, who played in the back of his father’s barber shop. At age 13 and an immense drive & passion to play the drums, Gary left home. He knew he had to experience drumming and not just think about drumming. He began sneaking into clubs, getting together with musicians, and sitting in. He toured America with various jazz artists not long after leaving home. By his 20’s Gary was a full-time working drummer, recording sessions in NYC where musicians worked most days three, four and five sessions a day! Here is where Gary created his practical independence ideas for drum set which in 1984 was released as “The New Breed” — one of the longest and most successful selling drum instructional books in history. The New Breed is not a workbook. The NB carries with it a philosophy for drummers and drum-set. Most importantly, The NB is for creators who want to become innovators. In the early 70s Gary began teaching his first students. This core group was the start of legions of Gary Chester, later New Breed, students. The NB book is a result of all the struggles and wisdoms Gary’s life experience provided him. The New Breed reflects Gary’s desire for everyone to approach both the drums and life as a process, practicing fluidity to allow for the fullness of true independence as a drummer and a musician. Gary’s training in self-direction is a gift offered to each approaching his systems which walk a drummer into the freedom to play anything, and to be among The New Breed.

Ep.3 – “I LOVE what The New Breed does to YOUR mind” w/ Chris Coleman

Ep. 6 – Developing your internal clock and “Start to Hear Around the Corners” w/ Gary Seligson

Ep.9 – “How these studies work for you when playing with other people” with drummer CLINT de GANON!

Note: Some MD articles are only available in pdf format. Those articles do not appear in this list. Subscribers to Digital and All-Access can view every Modern Drummer issue in their available formats. Browse all MD issues from our archive here.
April 1983: 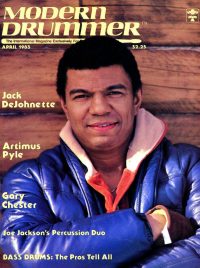 Writing The History of Rock Drumming opened a Pandora’s Box. I knew it would. Researching the existing volumes of rock history made it clear that there was a shameful lack of recognition for the drummers’ contributions to this music. 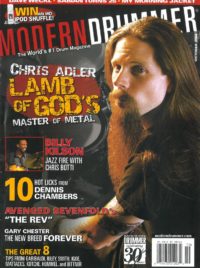 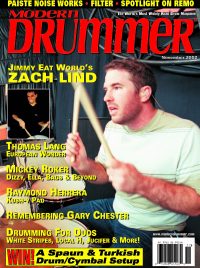 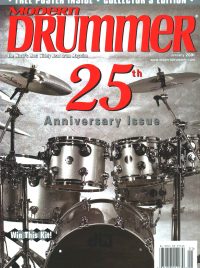 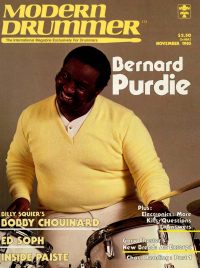 Category: News
Blink 182 Is Back! After seven years since the original lineup Tom DeLonge, Mark Hoppus, and Travis Barker Reunite.

After a lengthy break with singer Tom DeLonge, the band is set on returning stronger than ever. With the launch of a new single titled “Edging” that will be released on October 14, the band will embark on a world tour. The tour is scheduled to begin in March 2023 and end …

Gary Chester spent his drumming career making other people look good. He was one of the hardest working, most reliable, and most accomplished studio drummers in history. As if that wasn’t enough, Gary became an educator and developed an incredible system of drumming that we all know now as The …

Inspired by Gary Chester’s popular tutorial The New Breed, Blake Paulson’s method book Drumset Supersets quickly gets into the nitty-gritty by having students learn and memorize ostinatos for the hands and then tackle a series of bass drum reading exercises to be played in combination….

We asked the members of the Modern Drummer Education Team to share their thoughts on their favorite methods for developing independence. Here’s what they had to say.

Category: Drummers, On the Beat
Frankie Anthony of the Stick People

Hello, Modern Drummer readers, this is Frankie Anthony. I’m currently touring, writing, and rehearsing with my band mates in the Stick People….

Category: Drummers, On the Beat
Michael Spearman of Everything Everything

I’m in a band called Everything Everything, which is based in Manchester, England. We’ve been lucky enough to play all over the world, including the United States recently.

The February 2013 issue of Modern Drummer magazine features renowned bassist Mark Egan sharing some of the lessons he’s learned from working with drumming royalty. Here he focuses the discussion on the unique qualities and skills each of these players brings to the table….

Category: Drummers, On the Beat
Jeremy Taggart of Our Lady Peace

Hello, Jeremy Taggart from Our Lady Peace here. We’re releasing album number 8, Curve, in the U.S. on April 17. It’s been a great experience, and I can’t wait to play the songs on this year’s touring cycle. I couldn’t be more amped about it…

Two drummers working it out, face to face—trading licks, contributing to a massive groove, spurring each other on—it’s one of the great musical traditions, and surely it goes back to the very invention of the drumkit at the beginning of the last century. This group of tunes focuses on tracks …

Hi, Greg Burrows here. I’m honored to write a blog for Modern Drummer magazine, a publication I’ve been reading since the very first issue, which came out when I was in my early teens. There have been hundreds of articles and exercises in MD that have influenced and shaped who …

Category: Drummers, On the Beat
Kevin Figueiredo of Extreme

Hey, everyone, my name in Kevin Figueiredo, and I am the drummer for Extreme. I’ve been playing drums professionally for the past fifteen years, and my main influences include John Henry Bonham, David Garibaldi, Dennis Chambers, and Dave Grohl, among many others. I never went to music school, but I’ve …

Category: Drummers, On the Beat
Gary Foster of The Sunstreak

What’s up, everyone! My name is Gary Foster and I play drums and percussion with the Sunstreak…

His current gig may not call for much in the way of subtlety, but the well-rounded drummer knows how to tailor his touch to suit each project.

I've recently released a new CD, Robert Castelli/Boom Quartet, which is my first as a leader. (continue reading)

Category: Drummers, On the Beat
Paul Garisto and his days with the Psychedelic Furs, Iggy Pop, etc.

I was lucky enough to land a national tour at a young age about a year after I moved into New York City to pursue my drumming career. How excited I was to step onto that tour bus for my first time as we rolled out for a tour of …

When most folks think of extreme-metal drumming, they tend to picture a guy like Peter Wildoer, especially during his days with the progressive metal band Agretator….

Want to know the true meaning of a dedicated drummer? How about warming up your chops on practice pads in the back of a U-Haul trailer at 9:30 A.M. and in 95 degree weather, all in preparation for taking the stage at 10 A.M. on the grueling second stage at …

Paving the way for some of the great studio musicians of our time, like Jim Gordon, Jim Keltner, Jeff Porcaro, and John JR Robinson, were Earl Palmer and Hal Blaine. MD recently sat down with the jovial drummer to walk a bit down memory lane.