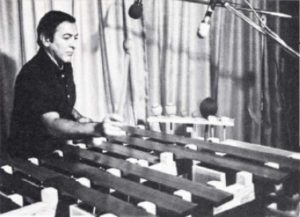 Welcome to the MD Drummer portal for Emil Richards. Here you can explore both public and Modern Drummer exclusive content related to Emil Richards. Our drummer Portal features news, lessons, videos, *Magazine Articles, MD Products and more. Be sure to navigate to other drummer pages by selecting their name in the dropdown above or by clicking Drummers in the navigation menu.

Emil Richards was an American vibraphonist and percussionist.

Richards began playing the xylophone aged six. In High School, he performed with the Hartford Symphony Orchestra. He studied with Al Lepak at the Hartt School of Music in Hartford, graduating in 1952. After being drafted, he belonged to an Army band in Japan and played with Toshiko Akiyoshi. He cited Lionel Hampton as his first and biggest influence on vibraphone

MD Mag ArticlesMD Web NewsMD Podcasts
Note: Some MD articles are only available in pdf format. Those articles do not appear in this list. Subscribers to Digital and All-Access can view every Modern Drummer issue in their available formats. Browse all MD issues from our archive here.
February March 1982: 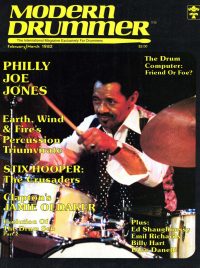 What Los Angeles studio percussionist refers to his equipment, an assortment of over 650 percussion instruments from around the world, as his “collection”?

Trying to establish a representative interview with Jim Keltner requires a sense of humor. The way he plays drums and the way he is seem to be so alike.

With the passing of studio great Joe Porcaro, we’ve gone back into the vault for his November 1994 Modern Drummer feature, in which we learned about his path to the top of the L.A. studio scene, and got an inside view of what it was like during the heyday of …

LA Percussion Rentals (LAPR), the percussion and backline rental company for some of the most respected live and recording acts worldwide, is celebrating a decade in business. At the company’s tenth anniversary party, the husband and wife owners revealed their new, revamped website….

Classic Tracks With George Harrison, Elton John, and Beyond…

My name is Oli Hecks, from England, currently living in Los Angeles…

My name is Oli Hecks, from England, currently living in Los Angeles…


No items found
–
Create a new list
Shopping cart
There are no products in the cart!
Continue shopping
0