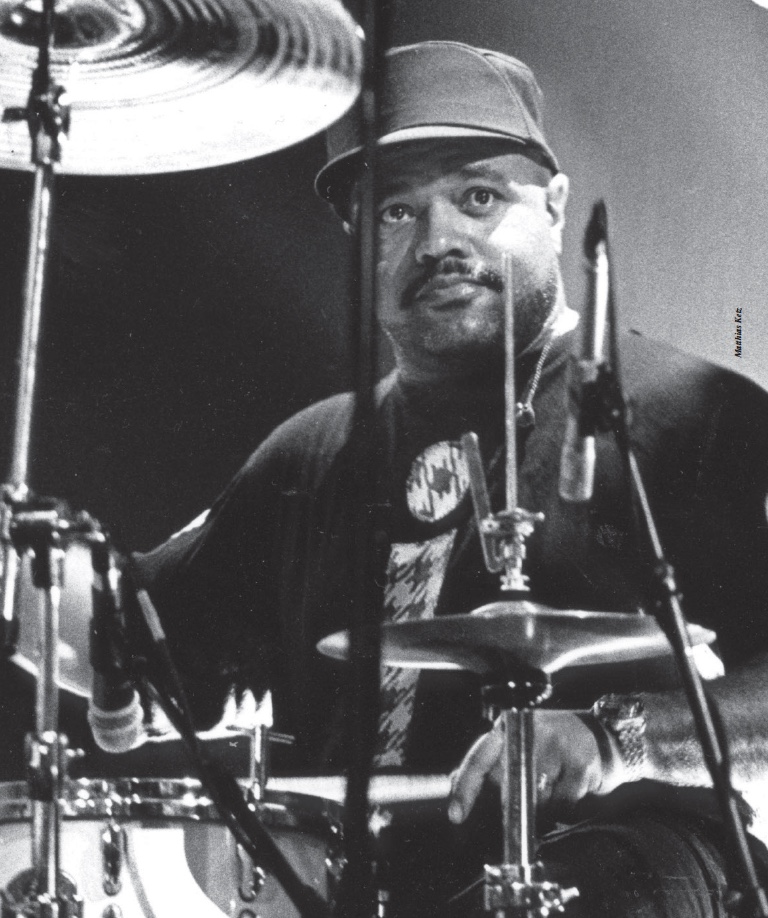 By merging elements of funk, fusion, R&B, and jazz into a daunting style that rides magically on a carpet of stunning power and technical exhilaration, Dennis Chambers has become one of the most important and influential drummers of the post-fusion period. Chambers is self-taught, but he possesses great confidence and a unique drumming style, and his influence can be heard in drummers as diverse as Tony Royster Jr., Thomas Pridgen, and Teddy Campbell, all of whom draw on Dennis’s groove intricacy, deep pocket, nearly incomprehensible speed, and awe-inspiring soloing style.

Chambers made his initial foray into the music business with Parliament- Funkadelic, but he exploded onto the scene as a member of guitarist John Scofield’s innovative mid-’80s quartet, where the drummer’s multi-tiered groove approach and thunderous solos often threatened to overshadow the bandleader’s significant talents. Chambers went on to record and perform with George Duke, the Brecker Brothers, Tower of Power, David Sanborn, Stanley Clarke, Maceo Parker, Steve Khan’s Eyewitness, Mike Stern, Greg Howe, Steely Dan, and John McLaughlin, and for the past ten years he’s been a member of the multiplatinum Latin rock band Santana. He has also co-led the groups Niacin, Graffiti, and CAB and has released several solo albums, including Getting Even, Outbreak, Front Page, and Planet Earth.

Chambers was born in Baltimore and began drumming at the age of four. By six he was performing in local nightclubs. In 1978, not long after his eighteenth birthday, he joined the legendary funk group Parliament-Funkadelic, and he remained with the band until 1985. Dennis subsequently relocated to New York City, where he became the house drummer for the legendary Sugar Hill Record Company. His massive beats would be sampled ad infinitum for the many classic hip-hop tracks released by Sugar Hill.

In 1986 Chambers joined John Scofield’s band for the recording Blue Matter. Two tracks in particular, “Make Me” and “The Nag,” showcase Dennis’s blast-furnace beats and speed-demon velocity. Dropping accents in fresh places, Chambers drives “Make Me” with a stomping bass drum, dexterous 16th-note rolls between the ride cymbal bell and the snare (within the main portion of the groove!), and a 2-and-4 backbeat that sounds like a massive redwood falling in the forest. Chambers’ pocket, abetted by bassist Gary Grainger, is like a tank dancing on ballerina’s legs: awesomely powerful but surprisingly nimble.

“The Nag” sent thousands of drummers to the woodshed with its cowbell-driven, bass-drum-galloping beat. Chambers’ drum sound is deep, his cymbal crashes enormous. Coupled with Scofield’s wiry guitar patterns, Chambers is everywhere at once, propelling the locomotive groove with an earthquake-inducing right foot, inverting the beat and dropping bombs, and creating an unprecedented tidal wave of rhythm.

Chambers’ reign in Sco’s band continued to unleash depth charges: the fantastic bass drum triplets of “Blue Matter,” the gale-force drumming of “Pick Hits,” and the swaying off-kilter displacements, hi-hat/bell punctuations, and dizzying drum break of “Loud Jazz.” Scofield disbanded this very popular lineup in 1989, and Chambers has often cited his desire to re-form the group.

Dennis’s recordings as a leader, though somewhat overlooked, feature tremendous drumming and adventurous compositions by Jim Beard, Lenny Pickett, Bill Evans, Adam Rogers, and Scofield. “Roll Call,” from 2002’s Outbreak, is all slinky, semi–New Orleans shuffle. That’s followed by “Otay,” a stellar example of tipping hihat conflagrations, slippery snare-to-tom fills, and unmistakable bass drum originality. The track reunites Chambers with Scofield, and the sparks fly. Throughout, Dennis’s hihat pushes with slanted humor while his bell creates lighter-than-air groove joy. Midway through the tune, the drummer establishes a marching snare-to-tom pattern, a silken space that soon returns to the funk at hand. “Groovus Interruptus” is four on the floor and in your face, a moment of simple fatback thumpery that’s simply majestic in its delivery. “In Time,” however, is the album’s standout. A classic penned by Sylvester Stewart that featured Andy Newmark on its original Sly & the Family Stone version, the song sees Chambers revisiting its funk filigree with constantly shifting accents, broken full-set 16ths, and his instantly recognizable roundhouse tom rolls.

Planet Earth, from 2006, is equally flush with drum mastery and choice material, from the backward beat of the title track to the scalding bass drum accents of “Dance Music for Borneo Horns #4” to “Camel Hump,” a solo vehicle of itchin’ snare drum figures, displaced hi-hat and bass drum, and all the seismic complexity of tectonic plates slipping on a funky planetary axis.

In the ’90s Chambers toured with Steely Dan, appearing on the 1995 album Alive in America, and worked with outstanding groups led by Mike Stern, John McLaughlin, and the Brecker Brothers. He joined Santana in time to record the 2002 album Shaman and later appeared on the Multidimensional Warrior and All That I Am discs and the Hymns for Peace DVD. Between his responsibilities with Santana, Dennis has continued to contribute to many top sessions (Niacin’s Organik and Barbara Dennerlein’s Take Off! are particularly worthy), and most recently he appeared on Steve Khan’s Parting Shot and Bootsy Collins’ Tha Funk Capital of the World

“A couple of my friends, like Lil’ John Roberts and Gorden Campbell, studied Dennis,” says 2012 MD Pro Panelist Gerald Heyward. “We were all church dudes, but hearing them bring Dennis’s influence to the R&B stuff and take the art to another level—playing all these fast crosshand licks, coming around the drums real fast but being very crisp—got me into Dennis. My whole thing was a lot of doubles and singles, and Dennis was doubling and tripling everything that I was doing with singles and doubles. [laughs] It was also remarkable to see that his style was versatile, coming out of Parliament and applying that to Scofield and the Brecker Brothers. So for me his influence was speed, taste, and versatility. Dennis took it all to another level.” 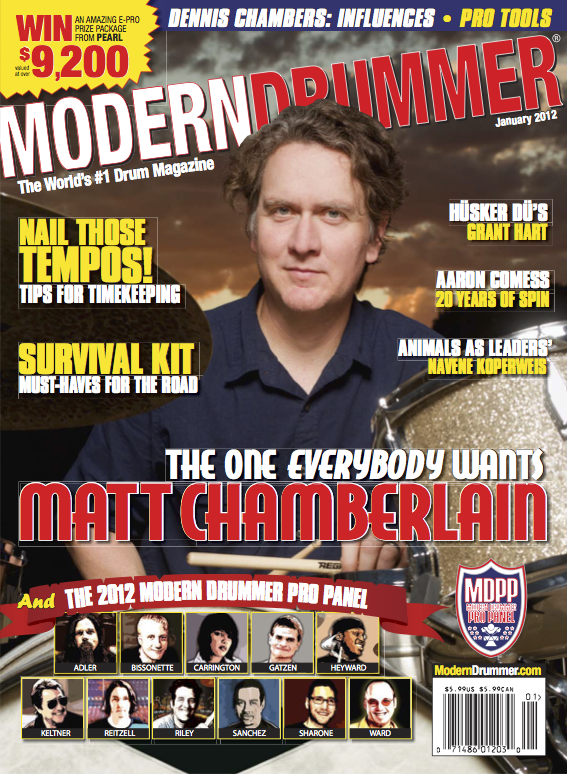 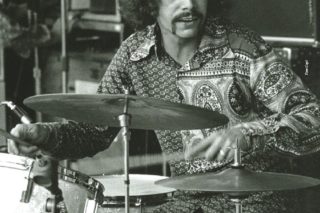 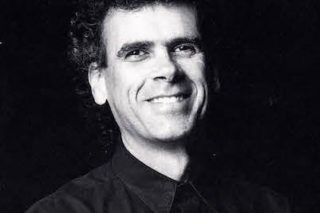 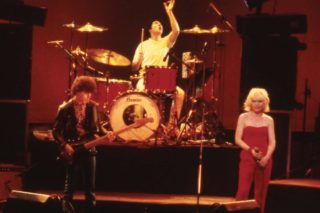 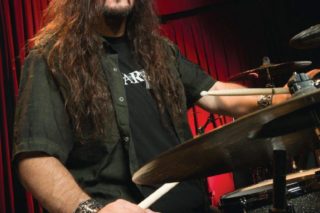