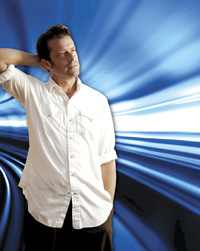 Calexico drummer John Convertino has always been more a mood-setter than a traditional timekeeper. And his band’s sixth album, “Carried To Dust”, offers plenty of examples of the drummer’s tone and dynamic-based trap work.

Convertino sets up the joyous choruses of “Victor Jara’s Hands” with a slowly building six-bar buzz roll rather than a foursquare fill. And throughout the album, accents are often delivered via Convertino’s brushes smacking the sweet spot of the snare instead of a crash cymbal.

The seed for Convertino’s style was originally planted while he was a member of Giant Sand in the early ’90s. “A lot of our songs had that acoustic-to-electric dynamic to them,” Convertino explains. “I remember recording basic rock beats to these songs, with the hi-hats sloshing away. And it would just drive me nuts when we would listen to playbacks. The cymbals were so in the way, there was hardly any space for overdubs.”

Calexico’s method of basic tracking leaves plenty of room to layer the horns, vocals, percussion, and grainy guitar squalls typical to their songs. And onstage, Convertino doesn’t sacrifice intimacy for volume. With few exceptions, it’s brushes all the way. “I’ve tried playing with sticks, and it doesn’t work,” Convertino says with an exasperated laugh. “It’s like a mindset. Really loud songs that I played with brushes in the studio, I’ve tried using sticks with live–but it doesn’t have the swing or the feel that the brushes have.”