Welcome to the MD Drummer portal for Clayton Cameron. Here you can explore both public and Modern Drummer exclusive content related to Clayton Cameron. Our drummer Portal features news, lessons, videos, *Magazine Articles, MD Products and more. Be sure to navigate to other drummer pages by selecting their name in the dropdown above or by clicking Drummers in the navigation menu.

We all first met Clayton Cameron several years ago. His career had brought him from manning the skins in the big band behind The Rat Pack and the legendary Sammy Davis Jr. to the high-profile gig playing behind Tony Bennett in the Ralph Sharon Trio. Clayton did 13 records with Tony Bennett, but it was after MTV “discovered” Tony and released his Grammy Award winning CD and DVD “MTV Unplugged,” that Clayton and Tony’s schedule got very busy. Tony Bennett deservedly became an unlikely “rock star” and taught the world a whole collection of “new” songs, that were actually old standards. Clayton played with the grace of Papa Jo Jones and Billy Higgins in supporting Tony Bennett.

Clayton was anointed as “The Brush Master” after he started putting names to all of his new brush sounds and released his amazing brush video The Living Art of Brushes (1990) and book Brushworks (2010). But simply fitting into that singular fixed mindset didn’t interest Clayton, he has continued to grow. Today he is finalizing a new book called Perfect Time and he is teaching at UCLA. Based on his brush expertise, the new book, and his teachings, Clayton will also be writing a new column for Modern Drummer.

MD Mag ArticlesMD Web NewsMD Podcasts
Note: Some MD articles are only available in pdf format. Those articles do not appear in this list. Subscribers to Digital and All-Access can view every Modern Drummer issue in their available formats. Browse all MD issues from our archive here.
April 2022:
Introducing…

My name is Mark Griffith, I am a professional musician who happens to play drums. I tour, play locally, record, do clinics, masterclasses, teach, and I write. I started writing for Modern Drummer under Ron Spagnardi’s leadership 25 years ago, I came back to Modern Drummer a year ago to …

Tapping into, and brushing up, on Perfect Time We all first met Clayton Cameron several years ago. His career had brought him from manning the skins in the big band behind The Rat Pack and the legendary Sammy Davis Jr. to the high-profile gig playing behind Tony Bennett in the … 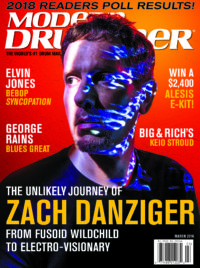 Drum enthusiasts from around the globe convened at the Glendale Civic Auditorium in Glendale, California, this past October 7 to check out informative clinics and a plethora of new and vintage drumming gear. The stellar performance lineup included Jason McGerr (Death Cab for Cutie), Jason Sutter (Cher, Dee Snider), Clayton … 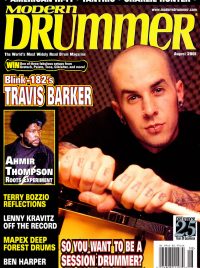 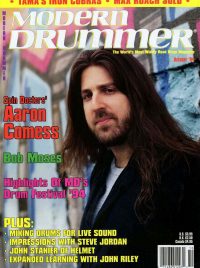 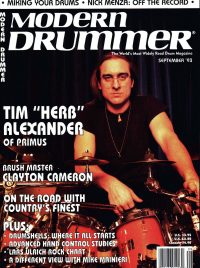 Almost as soon as the pandemic hit this past spring, Sean J. Kennedy had the idea of recording some rudimental classics with a bunch of friends, virtually. The initial group was composed of brass players and percussionists, which Kennedy called the Rolling Buzzards Brigade as an homage to the musicians …

Category: On the Beat
Bernard Fowler of the Rolling Stones

Talking About New Album, Percussionists/Drummers, and Gear Hello everyone in Modern Drummer land! Inside Out is the name of my new LP and it’s a reinterpretation of songs written by Keith Richards and Mick Jagger for the Rolling Stones. As I was finishing up my last LP, The Bura, I …

My name is Jose Rosa, and I’d like to tell you about my latest book, The Art of Latin Drumming, and share information about the Contemporary Drums & Percussion Camp.

I just want to take this opportunity to share with you the amazing journey I’ve had over the last year–2008 was truly an unforgettable experience. After decades of playing in bands with other musicians and participating in international drum festivals, I decided to focus the last three years on solo …

In drumming, the terms legendary and innovator are thrown around far too often. Yet Earl Palmer deserves both of these titles.