Welcome to the MD Drummer portal for Butch Vig. Here you can explore both public and Modern Drummer exclusive content related to Butch Vig. Our drummer Portal features news, lessons, videos, *Magazine Articles, MD Products and more. Be sure to navigate to other drummer pages by selecting their name in the dropdown above or by clicking Drummers in the navigation menu.

“Artist” is the single word which best describes producer, mixer, composer, and multi-instrumentalist Butch Vig.  Born in Viroqua,Wisconsin, his parents Doc and Betty exposed Butch to a variety of music and fine arts culture during his youth.

While attending the University of Wisconsin Madison, where he received a degree in filmmaking, Vig focused on experimental music composition – an area that would serve him well into the future.  While at the UW, Butch jumped into the local music scene and joined the band Spooner as its drummer.  Unlike most drummers, content to bang out the rhythms, Vig pursued music composition with the band and stepped behind the studio glass to shape the recorded sound as a producer.

After graduating from the UW, Butch co-founded Smart Studios and began producing and mixing albums.  His perseverance as an independent producer in Madison carried far beyond Wisconsin’s borders, as artists from around the country began to hear the clear, edgy, hard rock sound shaped by Butch’s productions. His work with Nirvana, Sonic Youth, Smashing Pumpkins and Soul Asylum in the 90s has been hailed by music critics and authors who have placed his work at the top of the decade’s best recordings.

Additionally, Vig has created many exciting remixes for such prominent artists as U2, Beck, Korn, Alanis Morissette, Depeche Mode and Nine Inch Nails.

In 1995 Vig returned to performing and writing with a band he formed that goes by the name of Garbage.  The multi-platinum, Grammy Nominated band has achieved worldwide critical and commercial success as it ushered in yet another new direction for rock music.

Recently, Vig has produced critically acclaimed albums for Against Me, Green Day, and The Foo Fighters, winning a Grammy for their album “Wasting Light.”  In 2015, Butch produced The Foo Fighters HBO documentary “Sonic Highways.” In 2019 Butch produced the soundtrack for Puppy Love, featuring Portugal The Man, LP and Kurt Vile. In 2021 Garbage released their 7th album, the critically acclaimed No Gods No Masters. He was recently ranked #9 on NME’s Top 50 Greatest Producers Ever.

MD Mag ArticlesMD Web NewsMD Podcasts
Note: Some MD articles are only available in pdf format. Those articles do not appear in this list. Subscribers to Digital and All-Access can view every Modern Drummer issue in their available formats. Browse all MD issues from our archive here.
October 2022:
Pioneering Drummer and Producer Butch Vig Talks Drumming, Roland V-Drums, Production, and Garbage.

There are very few musicians that have had the influence that Butch Vig has had on modern rock music. As a drummer for the band Garbage his acoustic-electronic-hybrid approach to drumming is revolutionary. Their new record No Gods No Masters is their best yet. Providing a sonic landscape that supports … 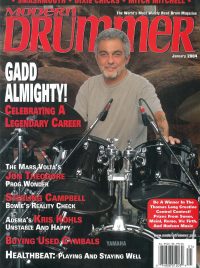 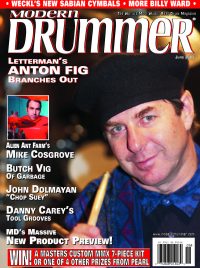 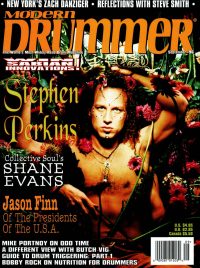 Category: Drummers, On the Beat
On the Beat with David Stanoch: Where Old School Meets New—The Timeless Rhythm of Clyde Stubblefield

On Saturday, February 18, 2007, we lost a singularly unique artist, Mr. Clyde Stubblefield, known to musicians worldwide as “The Funky Drummer.” Check out the August 2017 print and digital versions of Modern Drummer for a look at Clyde’s life, career, and insights from the man himself, as well as …

Modern Drummer magazine’s September 1999 issue featured famed James Brown drummers Clyde Stubblefield and John “Jabo” Starks on the cover in a dual interview. We’ll be presenting Clyde’s half of the piece in an upcoming post; here we share quotes from three prominent drummers who went on record in that …

See what’s in, and where to order, the April 2015 issue of Modern Drummer magazine featuring Bernard Purdie.

What a difference a year can make. In January 2007, Wally Ingram was finishing up brutal chemotherapy and radiation treatments, battling for his life against the squamous cell cancer that had invaded his throat and neck….