Modern Drummer magazine’s September 1999 issue featured famed James Brown drummers Clyde Stubblefield and John “Jabo” Starks on the cover in a dual interview. We’ll be presenting Clyde’s half of the piece in an upcoming post; here we share quotes from three prominent drummers who went on record in that article singing the praises of “the funky drummer,” who died this past February 18 at the age of seventy-three.

When I first heard James Brown, I obviously wanted to know who the drummer was, and that’s when I became aware of Clyde Stubblefield. He had such an identifiable sound. As I discovered the tracks that I knew to be him, I was able to identify his style—how he played real tight, with a sound that was a sort of carryover from the jazz tuning—tight snare, small bass drum, not sounding like he was hitting real hard but getting an impact out of the attitude he played the drums with, which was a real powerful statement.

Ironically, I was on a session four days ago where the producer used the “Funky Drummer” loop for a song that I played on top of. He said, “If I’m ever going to use a drum loop, it’s going to be that one.” That groove has been used so often and has crossed over into so many different idioms of music.

Clyde has influenced so many drummers that I’ve often wondered if he single-handedly was responsible for inventing boogaloo. It’s pretty cool to be involved in the beginnings of something, and let’s face it, it’s never been done any better.

Clyde lives in my hometown of Madison, Wisconsin, so I know him as a friend. He’s sort of an institution in the community because he not only plays sessions, but he does a couple of different jam sessions around town. He’s a local treasure.

I think everyone still says he’s the most sampled drummer in the world. When we were doing the first Garbage record, we actually had Clyde come in and play a couple of songs. He’s absolutely amazing to watch. We had a drumkit set up that wasn’t really tuned and didn’t sound particularly good, but he got behind it and did a couple of takes and they were amazing.

When I watch him play I’m in awe of the finesse and the push/pull he does on the snare and the hat. It’s the syncopation on the hat and the ghost notes on the snare that are amazing. I remember once asking him, “Clyde, how do you do that?” And he said, “I try not to think about it. It just kinda comes out of me.” He really is one of a kind.

Clyde Stubblefield is the funkiest human being walking this planet, [Jabo Starks] is a close second, with Zigaboo Modeliste third. If you looked in the dictionary under funk, it would say, See encyclopedia of Clyde and Jabo with James Brown. 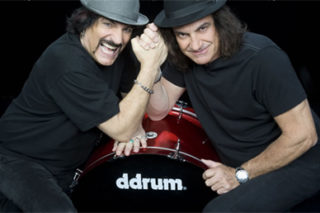 On the Beat with Carmine and Vinny Appice: Brothers Talk New Album, Sinister

Adam Pierce of All Shall Perish