Welcome to the MD Drummer portal for Brad Wilk. Here you can explore both public and Modern Drummer exclusive content related to Brad Wilk. Our drummer Portal features news, lessons, videos, *Magazine Articles, MD Products and more. Be sure to navigate to other drummer pages by selecting their name in the dropdown above or by clicking Drummers in the navigation menu.

Wilk started his career as a drummer for Greta in 1990, and helped co-found Rage Against the Machine with Tom Morello and Zack de la Rocha in August 1991. Following a hiatus with RATM, Wilk, Morello, Rage Against the Machine bassist Tim Commerford, and Soundgarden front man Chris Cornell formed the supergroup Audioslave. In 2016, Wilk joined the band Prophets of Rage, with Morello, Commerford, Chuck D, B-Real and DJ Lord. Wilk has also played drums on Black Sabbath’s final album “13”, released in June 2013.

Rage Against the Machine starts a world tour in March 2022.

No items found
Note: Some MD articles are only available in pdf format. Those articles do not appear in this list. Subscribers to Digital and All-Access can view every Modern Drummer issue in their available formats. Browse all MD issues from our archive here.
April 2018: 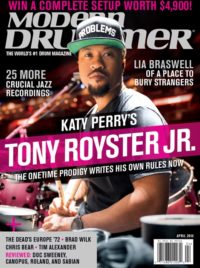 Brad Wilk of Prophets of Rage

Touring with an act that’s a household name comes with its perks, not the least of which is playing your own kit every night. Brad Wilk’s needs on the road with Prophets of Rage—the supergroup composed of members of Rage Against the Machine, Public Enemy, and Cypress Hill—are decidedly simple, … 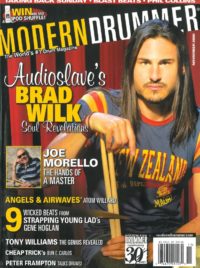 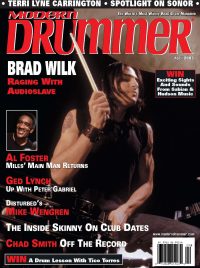 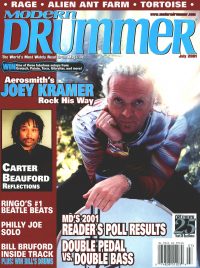 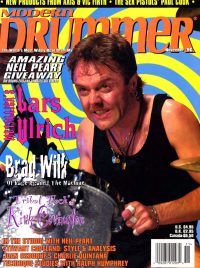 By Alex Kluft Smashing Pumpkins and Jane’s Addiction kicked off the opening night of their tour at the American Airlines Center in Dallas, TX. This dream 90’s tour will end at the Hollywood Bowl on November 19th. For Jane’s Addiction, this was their first show with original bassist Eric Avery in 12 …

By Alex Kluft Photo by Andreas Neumann On March 25, 2022, the world lost one the greatest drummers and member of one of the most important and biggest rock bands of all time, Taylor Hawkins of the Foo Fighters. To honor Hawkins, Dave Grohl put together two of the biggest …

Monday, November 1, 2021, on Def Leppard drummer Rick Allen’s 58th birthday, we are announcing a special upcoming auction called ’12 Drummers Drumming’ to benefit his Raven Drum Foundation. For the past 37 years, PNC has calculated the prices of the 12 gifts from the classic holiday song, “The Twelve Days of Christmas.” The PNC …

Yoyoka Soma is an 11 year old powerhouse of a drummer from Japan. She started playing drums at the age of two, played live at four, and formed her family band “Kaneaiyoyoka” at five. At 6 years old, she even released her first CD while in kindergarten. In addition …

Category: On the Beat
Linden Marissen of the Faim

I’m Linden Marissen and I play drums in the pop/alternative/rock band the Faim. We released our debut album, State of Mind, on September 13 and we’ll be touring the US in September and October.

Category: Drummers, On the Beat
On the Beat with Jon Busby of Sparrows: Talks Influences, Setup, and New Album

Hello fellow Modern Drummer readers! My name is Jon Busby. I want to first say how humbled I am to write an On The Beat web post for Modern Drummer magazine. Ever since I started playing drums at the age of twelve, it was always a goal of mine to …

We recently spoke with Brad Wilk about Prophets of Rage, his new band with his Rage Against the Machine comrades Tom Morello and Tim Commerford, on the eve of its first tour.

Recording with Black Sabbath was the first surprise; now the ex-Rage/Audioslave drummer dashes expectations again with the Last Internationale….

See what’s in the pages on of the November 2014 issue of Modern Drummer magazine featuring Mark Guiliana!

Category: Drummers, On the Beat
Peter Landi of Marco With Love

I am twenty-two years old, and I hail from Sag Harbor, New York. Along with being in MWL, I am also the drummer for Jonny Lives! and the Killing Floor….

Category: Drummers, On the Beat
Sunny Leejean of Activator and the Meaning of Life

My search for a drum sound has been an active one. I’ve played everything from an old-school “tube??? Tama from the late-’80s to fusion-size Pearl, Yamaha, and PDP drumkits….

Category: Drummers, On the Beat
Eve to Adam’s Alex Sassaris

I’m Alex Sassaris from the NYC rock band Eve to Adam. We are gearing up for the release of our fourth studio album, Locked and Loaded, which comes out September 17 through our label 3 for 5 Records/MRI/Sony RED….

Category: Drummers, On the Beat
Mike Lloyd of Leogun

My earliest memory of wanting to play drums dates comes from when I was ten years old and riding in the back of my dad’s car.

Smash Mouth drummer Jason Sutter wasn’t looking to jump ship when he was asked to sit in on a third-call audition for vocalist Chris Cornell.

For a guy who can really punish his drums, Brad Wilk has always been hip-shakingly funky. In 2002, he told MD, “I’ve listened to a ton of old organic funk. I would go to sleep with James Brown records on repeat.???

Damien Fahey has a dilemma: These days he’s having a difficult time finding the time to play his drums. You see, Damien hosts one of MTV’s most popular shows, Total Request Live, which airs weekdays at 5:00 P.M. EST to an audience of 50 million viewers.

Audioslave’s Brad Wilk had plenty to say for MD’s April ’03 cover story. But there’s more! Check out the hard-hitting drummer’s comments on topics ranging from Audioslave’s incredible first video to the surprising similarities between The Police and Rage Against The Machine. (continue reading)

In this episode, Mike and Mike share some of the gear they’ve regretted letting go over the years. The featured artist is Ricky Martin’s Tony Escapa. Up for review is the Daru Jones signature series of portable/affordable PSTX DJs 45 cymbals from Paiste. After fielding a few listener questions, the …

Episode 62: Bass Drum Technique, Brad Wilk, and More In this episode, Mike and Mike dig into the November 2016 issue of Modern Drummer and discuss alt-rock great Brad Wilk and some interesting titanium and bronze snares from Van Kleef. The education topic this week is developing bass drum technique. …