Keith Moon provided the magic ingredient in the unique chemistry that created the legendary rock band the Who. Moon’s passion and unpredictable drumming propelled the band to heights that no other drummer could duplicate. When Moon passed in 1978, the Who carried on with Kenney Jones and then Simon Phillips. Jones and Phillips are two of the greatest rock drummers of all time, and both of them pushed the band into new and interesting directions. But Moon’s volatile, kinetic energy seemed impossible to recreate.

Enter Zak Starkey. Keith was Zak’s godfather and a close friend of Zak’s father, Ringo Starr. Keith was also Zak’s biggest and most obvious drumming influence, as Starkey learned to play by jamming along to Who records.

When Zak was about eight years old, Keith gave him his first drumset, which was a huge white double-bass Premier kit with gold hardware that Keith had retired from use with the band. Zak and Keith never played drums together, but they talked about drums a lot. Both [Who guitarist] Pete Townshend and [singer] Roger Daltrey have stated that Zak is the best match for the band since Keith Moon. Zak embodies Keith’s explosive spirit. He pushes the band right to the edge of musical disaster without going over the edge. According to Zak, “It’s consistently about to go off the rails. That’s the beauty of the Who.” 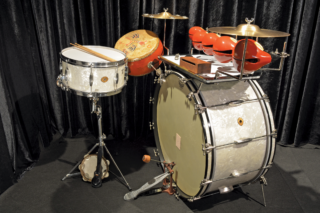