Having been a regular reader of MD for the last couple of years, I’ve noticed most of the studio information has been for the “session” drummer. This is very good and valuable, but there are many drummers who will be (or hope to be) making records as part of a more-or-less permanent group, who will want to know how to make the studio work for them, rather than learn how they can work for the studio. I hope I can offer a few useful observations.

As difficult as it is to please someone else on demand, it may be even more difficult to make the decisions and learn the technique to please yourself. The modern studio environment, personnel and language can be overwhelming to the uninitiated. It can be frustrating trying to translate what you hear in your head and onstage to what you hear on tape.

Learning to “see” the shape of a sound is one very important step in the understanding and communication of recording. Sounds are often described as “round,” “pointed,” “flat,” “tubular,” “boxy,” “bright,” et cetera. —This can give you a common language to describe what you like or dislike about a particular sound.

Over the course of seven studio albums with Rush, I’ve been fortunate enough to be limited only by my ability and imagination in exploring and developing my drumming. This is a very large and rare advantage. One of the nicest things about being a part of Rush is that freedom to work “over my head,” and to be able to learn by experiment and analysis. Every album is a kind of “final exam” for me. I expect to hear new ideas and significant improvement in my playing after the yearly term of touring, writing, and rehearsing.

In general, we all wanted to try some different rhythmic devices for Moving Pictures. In the past we’ve often used many time and tempo changes around a chord sequence we liked. This time we wanted to revolve the note structure around a good, strong pulse. This made for some interesting developments in the style and substance of our writing, and it seemed generally to give a more unified thrust to our music.

There have been no real revolutions in my own approach—just a little growth along a fairly linear path. I find myself playing harder all the time. As my tuning gets better and I don’t have to worry about the sound “choking,” I just want to squeeze out, thrash, hammer, or wallop that extra bit of sound. My smaller 12″ and 13″ closed toms are tuned quite a bit higher than before, and I find that if I lay the stick almost flat across the head and hit it very hard— the head will stretch to the point of de-tuning, similar to a guitar player bending a string. This athletic and unsubtle approach produces a nice throaty tone and a good strong attack, which allows greater definition and a more percussive effect from a closed tom-tom.

Another device I’ve been working on is the “left hand emphasis” approach to rolls. This involves beginning a single stroke roll with a triplet, which shifts the downbeat to the opposite hand. This allows for a nice eighth note “push” in the right hand or, the completion of the roll with the left hand, or you can shift the emphasis back to the right hand with another triplet. For the non-ambidextrous drummer, this type of “opposite-hand” thinking and playing can be very difficult to master, but it does open up infinite areas of rhythmic variations that were formerly awkward or impossible.

Another sensitive area of recording is editing. For those who haven’t experienced the studio first-hand, editing involves the cutting and splicing together of the best parts of two or more separate performances to form one perfect performance.

Editing is an art form for the engineer, but for the drummer it can be demoralizing and of questionable ethics. Why not just keep trying until you get it the way you want it? There are a few valid reasons that I would like to try to clarify.

One reason is spontaneity. Sometimes your part will not be firmly arranged. Every time you play the song it will be slightly different. Sometimes it’s nice to leave a section wide open, close your eyes, and go for it! Great things do happen by accident. Editing is the only way to capture these “accidents.”

A good example of the principle of editing is the pair of long fills that introduce each vocal section in the second half of “The Camera Eye.” I wanted something really special and exciting there, but I didn’t want it to be organized and pre-arranged. The only way to capture that spirit of wild abandon is to be that way. Every time we did a take of the song, I would close my eyes to those sections, let go, and flail away. This ranged from the ridiculous to the sublime, but I was able to choose the most successful, exciting fills for the finished track. What it really boils down to is that it’s always you playing. Editing just gives you the opportunity to choose the very best you can do.

A good analogy between playing live and recording in the studio is the difference between talking and writing. When you’re writing, you can cross out unnecessary or inaccurate words, and replace them or shift them around until you arrive at the essence of what you wanted to say. They are still your words. They’re just refined and distilled into their ideal form. In the case of “The Camera Eye,” I had to go home and learn how to play the “accident” so I could play it that way live!

Another good reason for editing is time. Studio time is precious and costly, and the pressure during basic tracks will bear down on the drummer! Everybody else can repair a note here or there, but the drummer’s part has to be perfect. The number of microphones involved in creating a drum sound precludes the possibility of “dropping in” to fix one bad snare beat or a click of the sticks. If a difficult track takes a long time, it’s you they’re waiting for! This can be really frustrating and lead you to over-concentration, and reproachful looks from the other musicians as you try it “one more time” because of some silly mistake you’d never make before or again in your life. AARRRGGH!

This was brought home to me sharply during the recording of “La Villa Strangiato” for our album Hemispheres. For four endless days and nights we played that very long and difficult instrumental again and again! We wouldn’t give up. Over and over we played it until our fingers were raw and swollen and our minds were drained and dark. We were determined to get the whole thing perfect, but in the end I just couldn’t do it, and we ended up putting it together from a few different takes.

Three years and hundreds of performances later, it continues to change and improve tour after tour, and remains very enjoyable, challenging and satisfying to play. Sometimes it’s a case of ambition overreaching ability.

Magic is still another reason for editing. This is always the subject of heated debate. Even if you define magic as “perfect synchronicity of rational factors,” the fact remains that sometimes the combination of sounds, feel, and execution is so good that it must be kept; even if it’s only half a song. Painters, writers, composers, and filmmakers must all know that you take advantage of a good thing when you’ve got it. You don’t hope that it will return later! Somerset Maugham said “Only a mediocre man is always at his best.” Amen.

We took a slightly different course in constructing “Witch Hunt.” Usually our songs are put together as a three piece, but we sometimes set aside one project to be a studio production number. Being a cine matic type piece, “Witch Hunt” also allowed a lot of atmosphere for unusual percussion effects which I took full advantage of! I emptied my armory using the gong bass drums, wind chimes, glockenspiel, tubular bells, conga, cowbell, vibraslap, various electronic effects, and in one section I double-tracked the whole drum kit. It was fun.

The “percussion ensemble” in the second verse was very interesting to do. When we recorded the basic track, I left that section largely blank, and went back and overdubbed each drum separately. I used different sounds and perspectives on each drum to create the dramatic effect of things alternately being very distant and very near. I also removed the bottom heads of my toms on this track to get a darker, more primal sound. 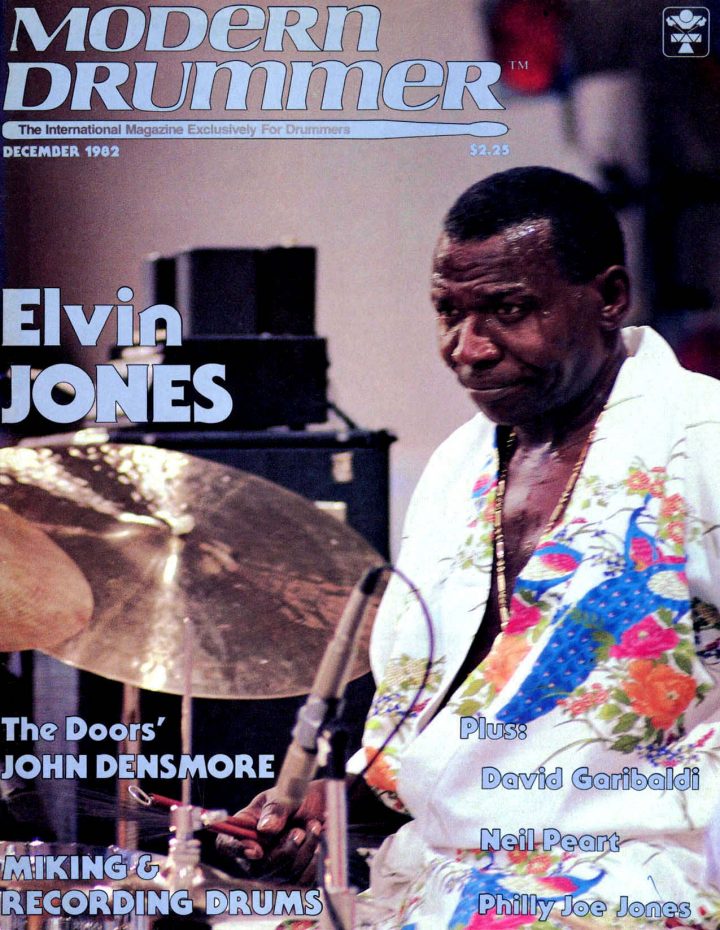 The Empty Canvas
By Billy Ashbaugh