Modern Drummer was saddened to hear of the passing of Harold Sargent. Sargent’s name might not be immediately recognizable to drum fans, but his influence was widely felt nonetheless, as a player, producer, mentor, and organizer of talent.

As one of the the drummers on the debut album by funk group the Skull Snaps, his intro beat to the 1973 song “It’s a New Day” would become one of the most sampled in hip-hop. Later, Sargent would actively cede his spot in the highly regarded group Wood, Brass & Steel, which also featured guitarist Skip McDonald and bassist Doug Wimbish, to Keith LeBlanc, essentially solidifying the lineup of the famous Sugarhill Records rhythm section.

“Wood, Brass & Steel was the funkiest band in Hartford, Connecticut,” recalls LeBlanc, “and Harold basically gave his drum chair with the band to me! Harold knew what it would sound like before we did. I guess you could say Harold Sargent was the granddaddy of hip-hop, and he unselfishly opened a real door to the music industry for me. I have a wonderful career playing drums, and it would not have bean possible if not for Harold Sargent’s mentoring.”

“Harold was the type that was always giving,” says drummer Alvin Carter, another of Sargent’s protégés. “He gave equipment, time, encouragement, and advice to many. Everyone that talks about Harold talks about something he gave them. He has directly and indirectly helped an untold number of musicians, and I am glad I am one of them.”

To learn more about Sargent, including his famous performance on the Skull Snaps’ “It’s a New Day,” click here.

Virgil Donati Announces “In This Life??? US Tour

Brendan Buckley on Tour With Tegan and Sara 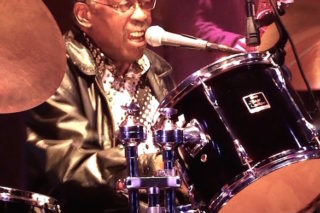