Love Led Zeppelin. How did John Bonham become one of a handful of drummers who are celebrated as much as any of the other guys in the band?

Chalk it up to feel. Chalk it up to love. There is an underlying emotion to the music that comes from the bottom up, rises through the songs like a deep and vital thing, and infuses the whole ensemble with a powerful, settled feel, and intangible poignancy. Any musician can learn how to play any Led Zeppelin song, of course, but to make it feel anything like the original, you have to start with a love for that visceral, emotive foundation.

You had better love it, because Bonham played with a confidence and swagger that leaves no room for unsteadiness or question of form. You should feel the changes in your veins. Rising above math is the goal. Listen as you’re falling asleep and let the dark and perfectly recorded sound carry you into dreams. Know the voice of each instrument, not just the drums.

It helps if you spent time at a very young age absorbing the material, sitting in rooms with your friends marveling at the atmosphere and power. It helps if you spent nights with your hand on your clock radio, feeling completely alone in the middle of your family, your school, your teenage life, and this music unraveled out of the small speaker, wrapping you in hope for a future wide with beauty.

Learn the basic grooves of each part by playing them over and over. The song needs to feel good, and it will feel good when you own the groove. Notice the movement of the body and the conversation between your limbs.

When I play “When The Levee Breaks,” the accents on the hi-hat work with the rise and fall of the snare and bass patterns to move my body like a steam piston. I get to be a machine there, all swing and torsion as I slam the snare hand down and bring the foot to the One.

Now, tie the parts together. When you come to transitions and drum fills that are troublesome, then the real buckling down begins. Develop a system for writing out the fills. Get some good headphones and a looping program. Sticking is everything. More than likely, Bonham is starting the fill in the middle of the phrase before you think it should start. Try to play the fill on the snare drum only, then between the snare and the foot, then start to move around the drums.

Play it one million times until the musicality of the fill becomes its own beast. Then, practice landing exactly right into the next part. Landing on that first note coming out of the fill is the most important place in the song. You can flub a fill on stage and the listener might think you’re just being creative, as long as that first hit out of the fill is in time. Loop a bar of the groove, then the fill, then a bar of the groove on the other side. Make the transitions seamless.

Spend some time lamenting your technique. Regret all the things that kept you from practicing, beat yourself up about your lazy tendencies, and the years you didn’t play drums at all. Then, straighten up, buckle down, and work on your technique.

Sometimes, in order to get the thing working for a live show, you’ll have to find a simpler way to make a part happen before it’s note for note. Simplify the part so it has a relative sound and feel, and transitions the song in the same way. This is Bonham, so if you’re like me, some of these techniques are lifetime goals. Be humble, accept the limitation for the time being, and just keep working.

Now you get to play through the song. Play until you stumble, then loop the problem area until it’s resolved, start the song from the beginning, then try it again. Playing something wrong at tempo over and over will just reinforce the wrong. Slow the part down until you can play it correctly, and then just watch your speed improve with work. Remember that a slow speed is your great friend. Patience is your ally. Extend kindness to yourself as to anyone you love.

Try to play without the soundtrack. When you sit down with the band, you’re going to realize that you’re being cued by things on the album that you’re not hearing in your practice studio with your band. Often, it’s an extra guitar track that has been given up in the interest of adapting three guitar lines to one guitar. Sometimes, it’s an effect added by Jimmy Page in the magic of the studio. The closer you can get to playing the whole song with just a click track—not listening to the song—the more your band will be impressed when it comes time to play together, and the better you’ll be at establishing the foundation, rather than following down the tracks of a train wreck.

As for feel, remember to lean back. Lean way back. John Bonham took his time. He took his time until he felt it was interesting to speed it up a bit, and make a little racket. But underneath it all, most Bonham songs fall way behind the beat. The push and pull of time beneath tempo is the gorgeous part of drumming. You get to affect the way the song feels by placing yourself behind or in front of the beat, or right on it. This isn’t about how fast the song is. This is about feel.

Bonham feels like he has something to say, and you’re going to wait for it, and when it reaches you, it is exactly what you wanted to hear. Reflect power by taking your time.

If you can, watch a video of Bonham playing the song live. It’s often difficult to see him behind the drums, but sometimes you get a little light bulb. “Oh, he’s hitting that crash cymbal with the left hand, not the right hand. Oh, he’s leaning into that section of the song.” You see his body tense and explode into a fill.

In the live version of “Immigrant Song” on the collection How The West Was Won, he comes flying at those drums like a storm breaking loose from the ether. Imitate the attitude of the drummer, and, sometimes, the attitude reflects in your playing.

Learn some background. Bonham loved Gene Krupa, so listen to Gene Krupa to uncover something of Krupa’s sensibility—those big ringy drums, his settled yet explosive way of playing, and his joy. If you read biographies, it’s apparent that Bonham and Robert Plant had a special personal connection. Listen to the way the vocals and the drums speak with each other, and the way the drums give the vocal space.

Finally, it’s time to make it your own. Drums are such an athletic event that to play someone’s parts can be kind of like getting into their body. You may dream where you’re walking arm in arm with him, or you intuit how it felt to hug him. You hear what he heard, and you start to understand the reason he wrote patterns—the little hiccup in the guitar riff that signals the odd snare hit, or the sway of the bass line that influences the hi-hat swing. You start to get an idea of where he might go should something out of the ordinary happen, say, when the singer comes in late to the verse. You start to understand why you feel a slight rush in that part on the record, and how it makes sense to slow it back down in that place. You start to expand into improvisation, and realize that one of your favorite things about Bonham’s playing is the feeling of exuberant exploration—an ability to push the limit, while always making it feel so good.

Then, one day, the horizon shifts, and you fully hear the song—all the elements beyond your dissection and mathematics and practice. You just play the song the way you remember hearing it that first time, with the light dim in your room, the dream of the future coming out of your clock radio as you close your eyes, and you hear a universe of magic in the sound of a bass drum. 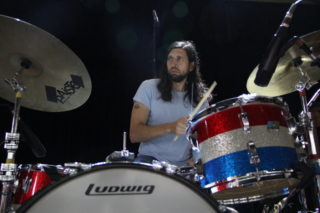 On The Beat with Fred Eltringham of Sheryl Crow: Talks Sheryl, Studio Work, and ACM Award