Modern Drummer subscriber Kevin Fitzgerald won our latest Give the Drummer Some VIP contest, scoring two tickets for him and his wife Dana to see KISS and meet drummer Eric Singer at the Oracle Arena in Oakland, California.

“The experience was amazing,” says Fitzgerald. “We were taken to Eric’s dressing room before the concert. He entered the room and was very outgoing and made us feel very comfortable. You could see that Eric was truly excited to present me with the prize. I was totally blown away when he handed me a 5×14 hand-engraved snare drum.”

The snare is a black-nickel-over-brass Pearl SensiTone. Eric said the drum was supposed to be a one-off until Pearl saw how beautiful the hand engraving looked. According to Singer, Pearl commissioned a second drum for its museum. 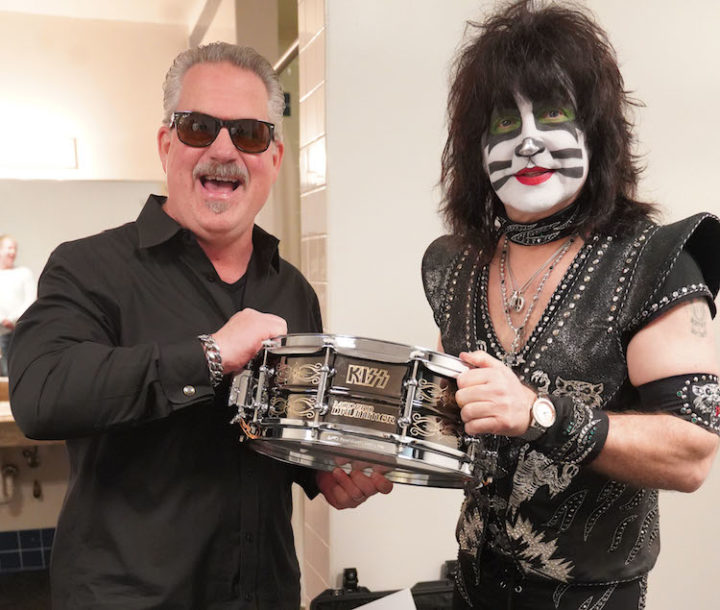 “Singer autographed the drumhead before the show and said he was looking forward to playing the drum during the band’s encores,” Fitzgerald says. “At the end of the show, a box containing the drum and the sticks he used to play the drum was brought to our seats in row 8. It was very exciting. The whole night was a once-in-a-lifetime experience.

“I want to say thank you to Eric Singer for his kindness,” Kevin concludes. “I also want to thank Pearl for producing this incredible hand-engraved snare and Modern Drummer for making this all possible.”

For more information on future Give the Drummer Some VIP contests—as well as other Modern Drummer special VIP subscriber offers—visit www.moderndrummer.com/vip.