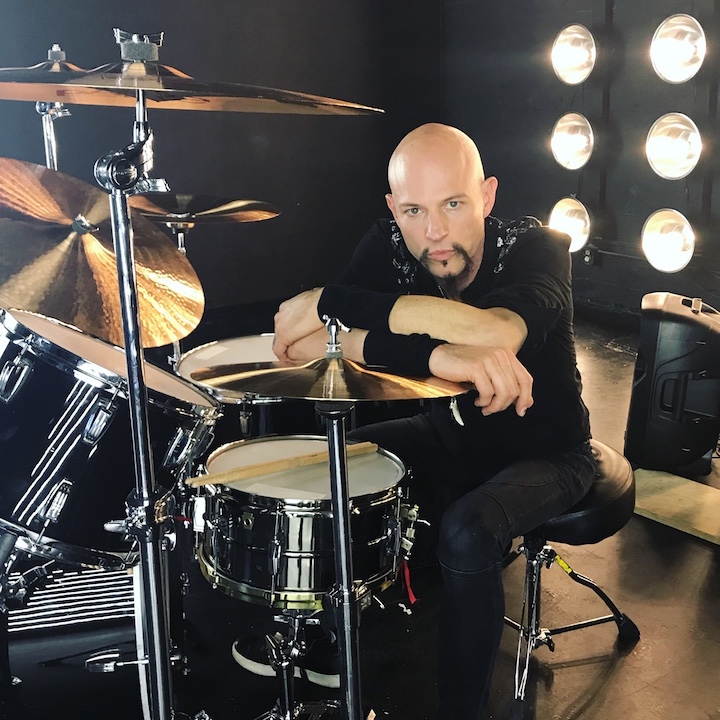 Howdy MD readers! Earlier this year I got a call from Foreigner bassist Jeff Pilson, asking me if I would be interested in being a part of an (at the time) unnamed band with him, singer Robin McAuley, and guitarist Reb Beach. I quickly said yes! The band ended up being called Black Swan and Shake The World will be released on Frontier Records February 14, 2020.

The record had been pretty much completed and recorded to a drum machine. This could be a good thing as you can hear the final product and it can inform your creative choices. But it can also be a challenge because if the band has a certain groove or thing that they have locked into, you have to fit into that.

The first song I recorded was called “Big Disaster,” a Gary Glitter-style floor tom shuffle groove. I love this kind of groove and I learned from Joan Jett drummer Thommy Price to play a flam every time I hit the snare doing the grace note on the floor tom. It makes it sound like there is a handclap hitting at the same time. The songs were already exceptionally written and performed but they came to life even more and everyone was very excited.

I like to work very quickly when recording in the studio. I can listen to a song once or twice and have it memorized. Sometimes I will use charts, but this is the exception rather than the rule. My goal is to get a musical theme or focus for the song and give the drum track, as well as the song, its own identity. I don’t care about fills, if they come my way, great, but that is not my focus. Once I have a signature groove/feel for the song then I will look for any moments that may need a little shove. This might be done with a flam or maybe it requires something more. Again, I’m always looking to have some sort of theme or cohesive thread through all of the parts I play in a song. My job is to support the vocals and make people move.

I will be headed to Japan in the beginning of February to perform with Michael Des Barres (Silverhead, Power Station). I’ll also be doing music career workshops at ESP Music School in Tokyo and Fukuoka.

Ace Frehley’s new record Origins Volume II will be released with special guest appearances from Cheap Trick’s Rick Nielsen and Robin Zander, Lita Ford, John 5, and former Kiss guitarist Bruce Kulick. We will be doing a European festival tour during the summer of 2020. Thanks for reading!

For more on Matt, visit www.mattstarrmusic.com.