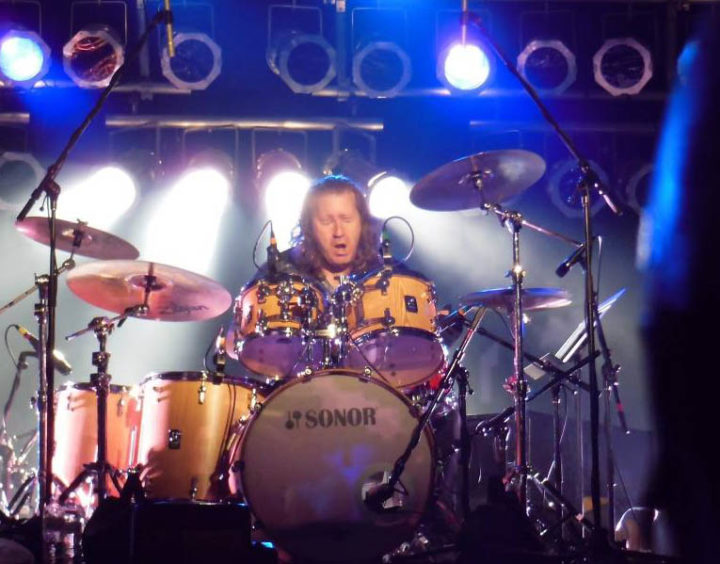 Talking About Albums, Collaborations, and Tours

Hello Modern Drummer “On The Beat” readers! I’m just checking in with a little update and to say a quick hello to the most awesome drumming community in the world!

For those of you who don’t know me, I’ve had the incredible good fortune to have toured and recorded with a few artists and bands you may be familiar with. I played with Cher for several years, and then left when I was asked to replace Steve Smith in a band called the Storm, featuring original Journey members Gregg Rolie and Ross Valory.

After that, Gregg Bissonette was kind enough to recommend me to David Lee Roth, who I toured with for a year, followed by a few years playing with Foreigner, replacing Mark Schulman who had left to join Simple Minds (Mark wound up playing with Cher later, so we swapped gigs a couple of times!).

After Foreigner, Richie Sambora, whom I’d met when I was in Cher’s band, called me to replace Kenny Aronoff on his Undiscovered Soul tour. Since that time I’ve worked on and off with CCR, Eddie Money, WCR (featuring Randy Meisner of the Eagles and Denny Laine of Wings) and lots of others, both on tour and in the studio.

I’ve co-produced two records with Gregg, Roots and Rain Dance. And I’m playing on all but one track on his latest release Sonic Ranch, which was released in October 2019. Musicians performing on the album are Steve Lukather, Neal Schon, Michael Shrieve, Dave Amato, Kurt Griffey, Rocket Ritchotte, Alan Haynes, and several others.

Recently, I did a record called Tattered, Torn, and Worn by David Glen Eisley (lead singer of Giuffria and Dirty White Boy), a single by Thom Griffin called “One Fine Day” (featuring CJ Vanston), and “Blood, Guts, and Games” by Eisley/Goldy (David Glen Eisley and Craig Goldy of Dio). A couple other records I’m on from a few years back are a jazz record by saxophonist Charley Langer called Never The Same and a pop/rock record with film composer John Pratt called Turn The Page. I’ve also filled in on tour with CCR on various occasions for Rock & Roll Hall of Fame inductee Doug “Cosmo” Clifford, who is their original drummer.

I’ve been a Sonor and Zildjian endorser for many years now, so my go-to gear has been Sonor Designer series drums and various configurations of Zildjian cymbals. A typical, basic setup is a 22″ kick, 10″ and 12″ rack toms (reversed so the 12″ is above the snare drum with the 10″ to the right of that, near the ride cymbal), 16″ and 18″ floor toms, and different snare drums, depending on the situation. Cymbals are usually a 20″ Ping ride, 17″ and 16″ crashes, 12″ splash, and 14″ Quick Beat hi-hats.

Thank so much for taking a few minutes out of your day to read this. I wish you all the very best with your drumming and musical aspirations!

Check out several videos below:

“Bad Medicine” from a Richie Sambora concert in Tokyo:

Cher at the Mirage full-length show

“She’s My Machine” with David Lee Roth from a Fox TV special:

Second half of a drum solo on recent CCR gigs in Montreal, Canada:

Dan McGuinness caught the last half of the drum solo I did in "Heard it Through the Grapevine" with CCR this past Saturday night. Thanks Dan! Love playing and traveling with these guys… super cool and tons of fun!

And for updates and more, visit www.ronwikso.com.