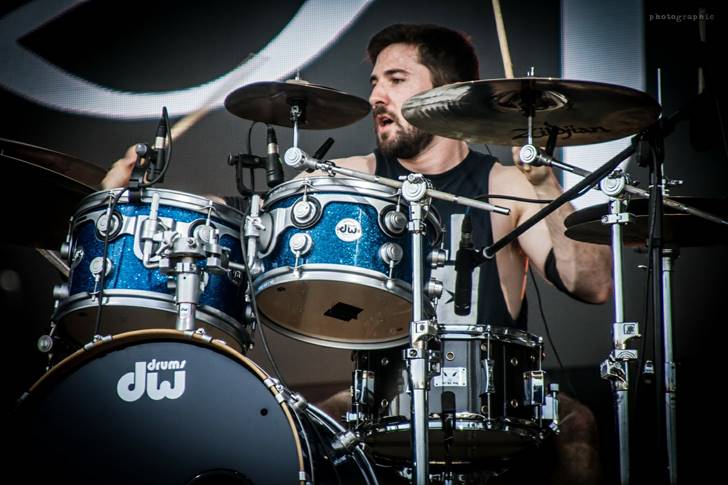 Hey MD drummers! My name is Steve and I play in the Offering, a heavy metal band based in Boston, Massachusetts. I have been a subscriber to Modern Drummer since I was fifteen, so having the opportunity to appear here “On The Beat” is an incredible full circle moment for me.

I grew up in a house full of guitar players, so naturally I rebelled and became a drummer. After high school, I pursued drums as a career and went to Berklee College of Music. While there I studied under Rod Morgenstein and Dave Dicenso. I also spent quite a bit of time freelancing. I landed some session work and appeared with Guthrie Govan, Dave Larue, and Phil Collen from Def Leppard. I taught lessons out of a local studio, but eventually left all of that behind to help form the Offering.

We just wrapped up our first-ever international tour, seeing stages such as the Fezen Festival where we directly opened for Arch Enemy and Dream Theater. We also had the fortune of playing Wacken Open Air in Germany, which hosted incredible bands such as Parkway Drive and Bullet for my Valentine with more than 85,000 people in attendance. We recently put out several music videos, and finally our long awaited debut record. Our new album Home has received rave reviews online, and was featured at number thirteen in Metal Releases on iTunes. Aardschok International magazine featured us as its number one album of the month.

Home really is the epitome of what I have to say as a drummer. My biggest influences growing up were Mike Portnoy and Matt Halpern—both very skilled drummers with loads of charisma. For as long as I can remember I burned to be like them. My work on Home is very much an ode to my heroes, but I wanted to blend their influences into my own Offering-flavored protein shake. On our previous self-titled EP I felt like my playing was a bit boring, so I really wanted to rise like a phoenix for the full length.

I like to think of my drumming personality as a groovy heavy metal caveman with an affinity for progressive music. For Home, my main goal was to write very clever heavy metal drum parts. I think there’s a clear distinction between intelligent and clever drum writing. I don’t particularly feel a need to fill every nano-second with chops, or even go all in with some crazy syncopated orchestration. I want listeners to simultaneously scratch their chins in satisfaction but also not necessarily know where the music is going. I want my parts to have just the right amount of chops, groove, and creativity, but not necessarily be something you’d expect. It’s a very precarious balance.

As far as gear is concerned, I always bring my Zildjian cymbals and DW 5000 double pedal. My go-to cymbal is my 18″ A Custom crash.

Thank you so much for reading and I hope to see you all on the road!