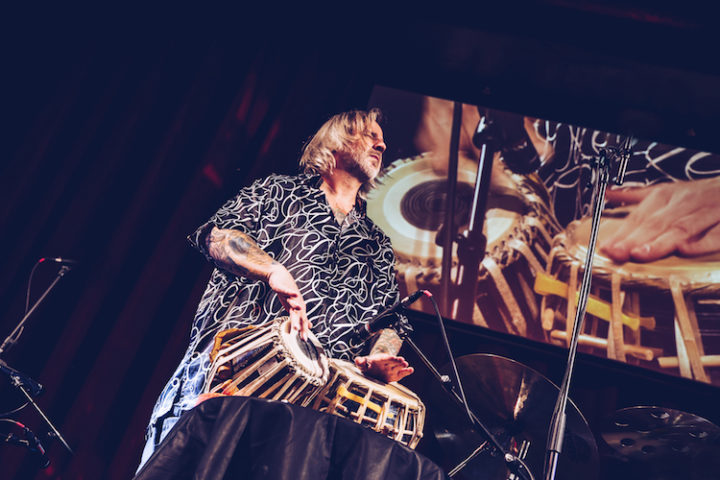 “Indian Clave” came about when Panos Vassilopoulos read a Modern Drummer article on an Indian–based composition by Pete Lockett and Horacio “El Negro” Hernandez. Some years later, after looking further into the topic with Pete’s book Indian Rhythms for the Drumset (Hudson Music), he touched base with Pete and invited him to Athens to perform solo. As part of this trip they went into the studio to re-record a new version of the track “Indian Clave.” The main rhythmic theme is in 5/4 and gets developed over five rhythmic modulations, resolving into a basic 5/4 groove and solos. The modulations of the theme make it feel like the rhythmic corner points are continually shifting, yet it remains solid in 5/4.

Lockett has continued to tour the world as a soloist, while juggling a wide variety of recording and composing. His most recent CD release was Boom, a duo recording with percussion legend Luis Conte. Current recordings include a project with world percussion expert Randy Gloss in LA. Pete also has a new product range coming out with Vic Firth that will be revealed at PASIC 2019.

Recent books with Hudson music include Bars, Beats and Building Blocks, which looks at rhythmic partitioning, and Symmetrical Stickings, an extensive toolbox of challenging stickings. He has also released his first full-length sci-fi novel, A Survivor’s Guide to Eternity, and his own drum and percussion app, DrumJam, in partnership with Sonosaurus.

Athens–based Panos Vassilopoulos continues to be busy with his project Triplicity, along with his solo performances at drum festivals around Europe. Learn more at www.panos-online.com.