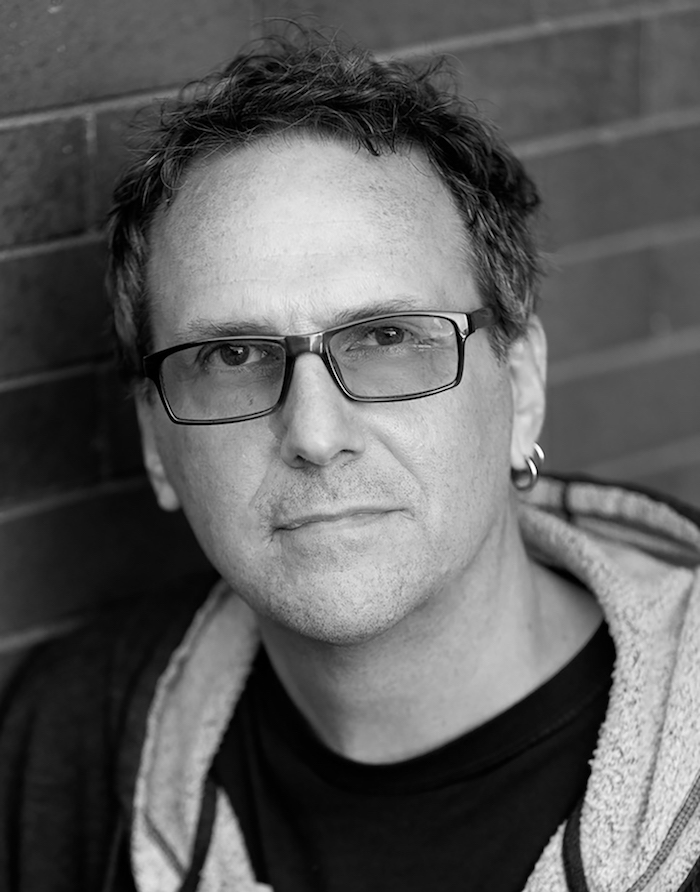 Talking About His Customizations and Artistic Endeavors

Hello MD! This year is proving to be a busy one, and full of surprises. My name is John Douglas and I am a drummer, drum tech, artist, and drum customizer—and not necessarily in that order. Sometimes it depends on the day of the week.

Recently, three of my long-time clients needed their drums painted/customized at about the same time. This rarely happens, but Murphy’s Law was in full effect. This year is ZZ Top’s fiftieth anniversary tour and I was determined to build a kit for my friend Frank Beard that was worthy of such a distinguished honor. The fiftieth is the golden anniversary so I decided to do the entire kit artwork in 24-karat gold leaf, something I had never done before. 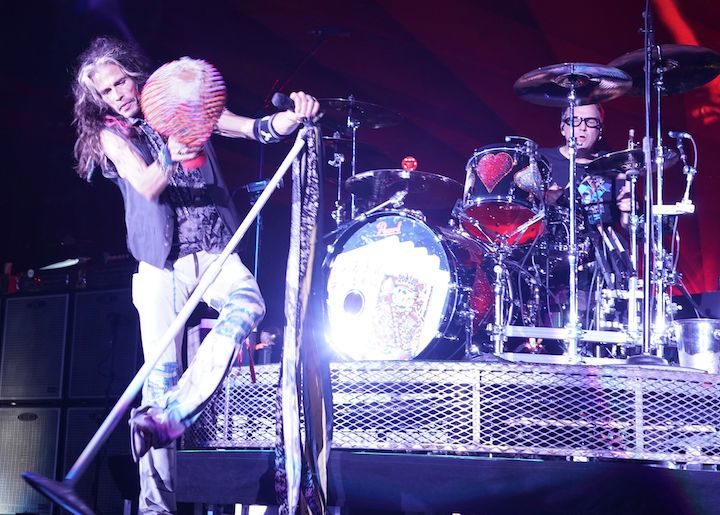 At the same time Alex Gonzalez was gearing up for another big tour with his band Maná and needed a kit done. He wanted to start with DW stainless steel shells, which added another level of labor-intensive prep work. Alex always has a strong idea of what he wants and it’s my job to understand and share his vision so I know what to do, and from there he trusts me to run with it. We’ve been doing Maná kits together for almost thirty years.

Before I could start both of these kits I needed to get drums together for Joey Kramer, who was set to start his Aerosmith Las Vegas residency on April 1. I have been Joey’s drum tech for the last six years so I knew what he wanted: bling! I started with Pearl Masterworks shells in black and proceeded to glue more than 50,000 Swarovski crystals on the shells—one at a time. Needless to say, it’s a very tedious process. The design was a playing card theme—large diamonds, hearts, spades, and clubs on the shells in multi-colored stones. When the stage lights hit it, there’s nothing like it!

While painting and customizing drums is the natural culmination of my two greatest passions in life—art and music—my true artistic love is painting black and white portraits on canvas. I carry minimal art supplies when I tour, a roll of canvas, black paint, white paint, and a few brushes. And that’s how I spend my days off, painting rock ’n’ roll portraits on canvas taped to the hotel room wall. This keeps me creative, productive, and kills lots of time on days off. This is vital for me to maintain a healthy tour lifestyle. 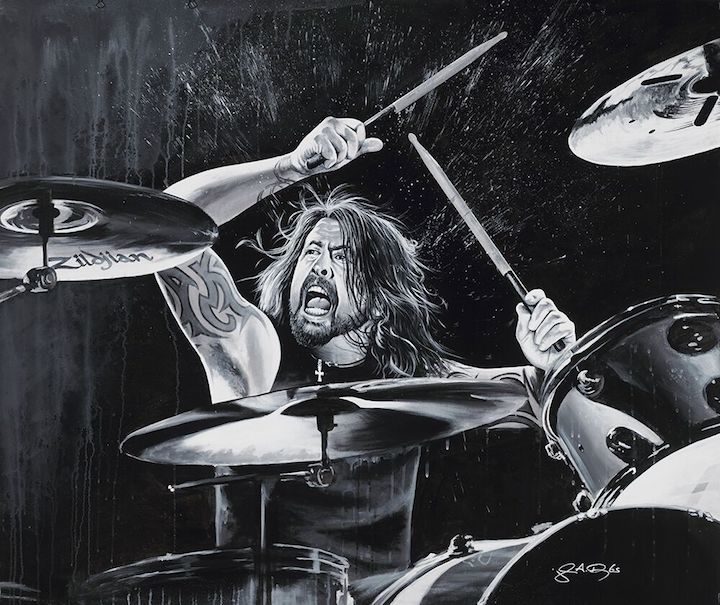 And the big surprise of 2019 (so far) was finding myself playing drums for Aerosmith. It first happened at the end of April during the band’s first leg of the Vegas residency. Joey took a bad fall and jacked up his shoulder the night before show number eight. I got the call at 2:30 pm on show day asking me (or maybe telling me) to play the show that night. I had about six hours to listen to the songs and learn them. So at 8:30 that night the curtain went up and there I was sitting at the kit about to play songs I had never played before, with no rehearsal (not even a soundcheck) with one of the biggest rock bands in the world. No pressure! I played that show and the next show and then we had six weeks off before the next Vegas leg giving Joey plenty of time to heal. 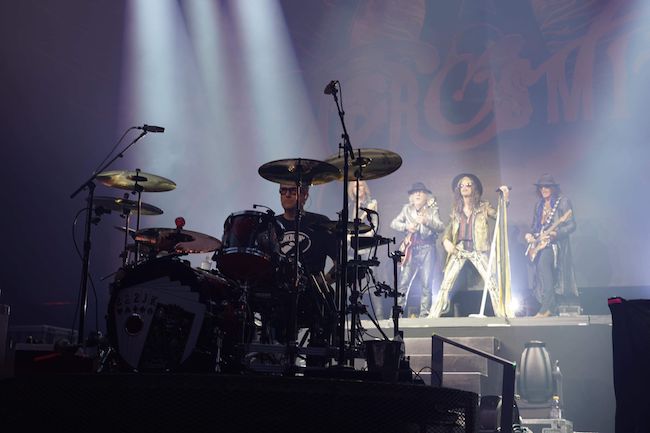 Fast forward to mid August when we were about to start the Aerosmith East Coast run of “mini-residencies” when Joey hurt his right foot (again, Murphy’s Law at work). I ended up playing all nine shows on this leg of the tour, again with no prep time. Before this year it had been a long time since I played a full throttle two-hour rock show with any band, let alone a band of this magnitude. Those first few shows were physically and mentally draining. I’m not bragging or complaining, but it was a miracle I could pull it off at all.

This leads me to my go-to gear. Luckily, I happen to carry my favorite sticks, the Vater MV10, in my workbox. Drumsticks are such a personal choice for us drummers. My other go-to item is Zildjian stick wax. Maybe not a lifesaver, but certainly a hand-saver and for a drummer that’s kind of the same thing. The stick wax allows me to relax my grip so I don’t feel like I need to hold so tightly. I have many favorite drum and percussion items, but this year, in these instances, these were imperative. Thanks for reading! 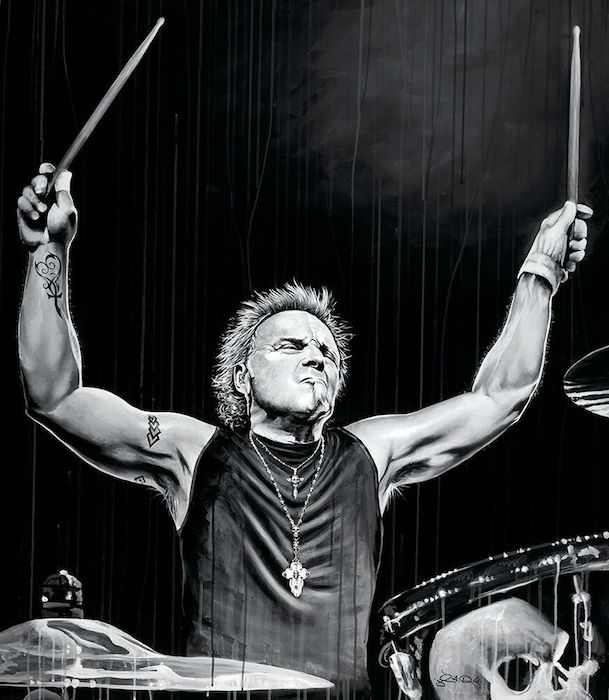 For more information about John and his art, please visit www.johndouglas.com/.