Hello Modern Drummer, Poncho Sanchez here. I am lucky to have spent the majority of my life in the pursuit and creation of my passion, music. The latest expression of that comes in the form of my newest album, Trane’s Delight, out September 20 on Concord Records. This album had its start about fifty-six years ago, when I was just eleven years old. I had been playing gigs around town, slowly saving up my money until I had enough to buy my very first record, John Coltrane’s iconic Coltrane.

Fast forward through six albums, touring the world while also becoming a father and a grandfather, Coltrane’s influence has been there through it all. My band and I have been fine-tuning some of the songs on the album at our live shows, working through arrangements so we can get them just right in the studio. We can’t wait to bring all of these songs back to life on the road, and see all of you moving to the quick mambo in “Yam’mote” or our cha-cha-cha take on “The Feeling of Jazz.”

A quick tip for the younger generations—touring when you’re young is certainly not the same as touring when you’ve matured. The heavy oak conga and tumba drums have become a thing of the past for me, and I’m happy to have my Moperc conga and two tumbas on the road with me. Moperc makes its drums exclusively with ash wood, which is just as hard as the traditional oak and delivers a robust, rich sound, while being a third lighter. The hardware on all Mopercs is stainless steel, which means they won’t strip, won’t rust, and stay together on the road. I am proud to work with Moperc not just for its quality products but because it is a growing company whose hands-on, entrepreneurial attitude is something I take pride in being a part of. 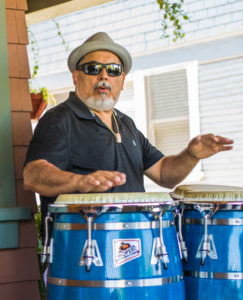 On top of my Moperc drums, I play exclusively with Remo heads. Remo Belli, a revolutionary figure who changed the whole system of percussion, founded Remo. When he first began developing the product, he would give me prototypes to try for a few months, which I would return with feedback. Slowly but surely the final product began to take form. The synthetic top that is now the worldwide benchmark for drumheads are not just easier on the hands than traditional cowhide, they have a much more responsive and consistent sound. Cowhide stretches and tightens, changing the sound depending on the temperature, but the Remo heads perform the same every time. Not to mention, the process of installing a new cowhide head is a weeklong process that involves a full day of soaking, mounting the skin, tucking, trimming, and drying. With these Remo heads, we can take off the old one and slap on a new one right now.

Until next time, thank you Modern Drummer. I hope to see you all at a show soon and thanks for reading!

Listen to the MD premiere “The Feeling of Jazz” here: https://soundcloud.com/user-957563399/poncho-sanchez-the-feeling-of-jazz/s-h9x6X.