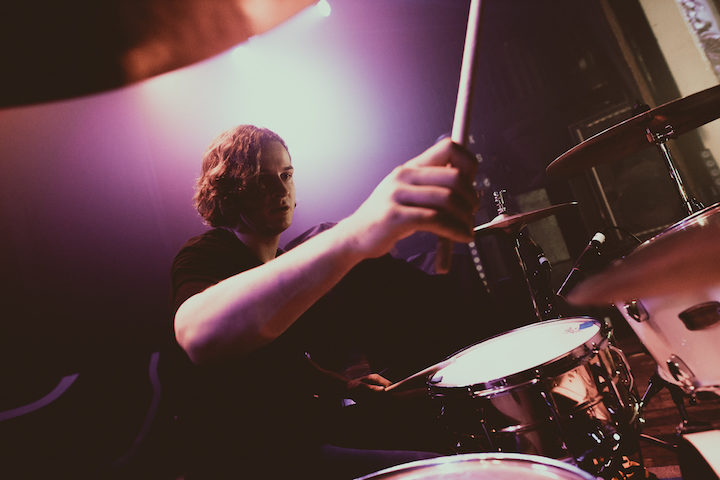 Hey Modern Drummer readers! I’m Linden Marissen and I play drums in the pop/alternative/rock band the Faim. We released our debut album, State of Mind, on September 13 and we’ll be touring the US in September and October.

I started playing drums when I was twelve years old in primary school. It was kind of weird how I first got involved with drums; one of my mates at school had no one to go to music class with so he asked me if I’d go. His dad was a drummer and he came to the school to help out with music class, so naturally we decided we’d learn the drums. From that point on I was obsessed with them.

Before I joined the Faim I played in local rock bands in Perth, Australia and any spare time I had was spent at The Hen House Rehearsal Studios practicing. Coincidentally, The Hen House is where I met the guys in the Faim and their manager Rob (who also owns the studios), so my time spent there played a pivotal role in how I got involved with the band.

My main inspirations and influences are predominately rock drummers such as Dave Grohl, Nathan Followill, Jimmy Chamberlin, Jorma Vik, Brad Wilk, and George Daniel. The reason these guys had such a big influence on me is that they have their own unique style and they play interesting, out of the norm parts while serving the song, which is what I try to incorporate in the Faim.

The recording process of our debut album was really interesting because half of the album’s drums were recorded in LA and the other half were recorded in Perth. The approach to tracking drums was vastly different in each city. In LA the pace was rapid. Drums were always the last thing to be recorded and because of time restraints, I had to come up with my arrangements on the fly as I was tracking. As soon as I had something I was happy with, we hit record and that’s what ended up on the album. Perth was totally different. I had way more time to come up with my parts so I went into the studio a lot more relaxed and comfortable, which was a lot more enjoyable.

I’m very fortunate to be endorsed by Zildjian cymbals and Pearl drums, which is what I play live. My favorite piece of gear is my 15″ K Light hats, they sound ridiculously good live and track really well. On the road, my cymbal setup stays pretty constant, but I tend to mix up drum sizes and drumheads every tour, mainly because I haven’t found the perfect drum sound for the Faim yet. After every show I’ll talk to our FOH Joe to get his feedback on the drum sound, especially if I’ve tried something new, tuning or head wise.