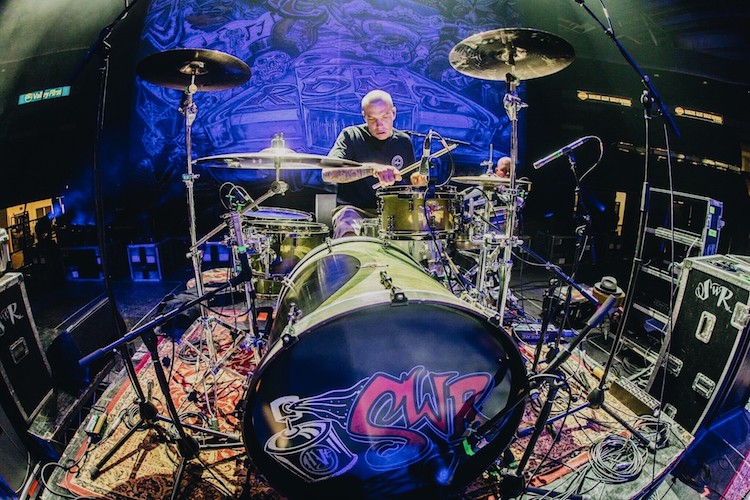 Greetings Modern Drummer family! First of all, I want to thank you for giving me the opportunity to tell you a little about myself. My name is Carlos Verdugo but my friends call me “C-Los.” I was born in Oceanside, California on May 18, 1985. I started playing the drums at the age of twelve and have been going strong ever since.

The first band I played in started up when I was in my early teens. It was a three piece with early Police, Operation Ivy, Descendents, and other punk influences. Shortly after that group disbanded I moved on to a reggae-rock style band named Tribal Seeds. I played drums with them for eleven years and recorded three records and various other tracks.

For the last two years I’ve been playing with Sublime with Rome and have been having the time of my life! These guys have taken me around the world in style. In my time with them we have played all of the US, Europe, Japan, South America, Australia, Canada, and Mexico—the list goes on.

We have been working really hard on a new album, titled Blessings, for a little over a year. It was released on May 27, 2019. Most of the drums were recorded in Texas at the legendary studio Sonic Ranch. It was awesome to really disconnect with everyday life and just focus on music. We also tracked a few songs at Universal in Hollywood, CA. We released a few singles that are out now called “Wicked Heart,” “Spiderwebs,” and “Blackout.”

It was a dream come true having heavy hitter producer Rob Cavallo (Green Day, Goo Goo Dolls, Paramore) and his right hand man Doug McKean at the helm for this record. I can’t tell you how nervous I was going into the session with these guys, considering all the talent they bring to the table. The drum tones sound and feel better than anything I have ever recorded in my life. My go-to gear includes Vessel Drum Co. and Vater drumsticks for this album and all my playing in general.

In the meantime, I’ve been building a studio that I’m very excited about. I plan to record, podcast, and have the bands that I know come jam! Lastly, if you guys want to stay up to date with me you can find me on Instagram @closdrums and my website Closdrums.com, where I will update everything that I’m up to. You can also find my clothing brand Driven To Protect Culture online at D2PC.com, where we have some exciting new products in the works. Thank you all for reading and see you on the road. Much love!