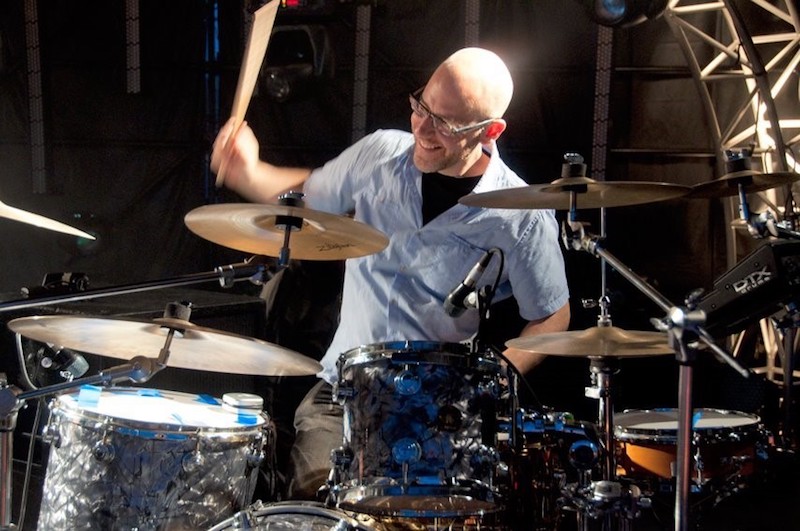 Hello drumming family! I grew up reading Modern Drummer magazine so it’s an honor to contribute to the publication. While growing up, I remember poring through the pages of the latest edition so adding to the conversation means so much.

I was raised in Long Island and studied the fundamentals with local celebrity drummers Dom Famularo and Pete Heywood. Afterwards, I honed my musicality while attending Drummers Collective in NYC. I have always made an attempt to play with as many different types of bands as possible. My formative years included stints with rock, funk, gospel, salsa, wedding, and blues bands. In the late ’90s I was introduced to the world of live electronica through Jojo Mayer and the Disco Biscuits. I knew I found a musical home. From that point forth, I focused my energy and creativity on mastering the genre and infusing it with elements from my past musical endeavors.

I opened for Lotus with the Ally in 2002. We hit it off and stayed in touch. It was great watching Lotus grow as a band over the years and I was ecstatic when they reached out in 2009 to ask if I wanted to take over their drumming chair. I immediately began to dive into their huge catalogue and I’m now closing in on being with them for a decade. It’s been an incredible journey that has fulfilled my childhood dream of being in a nationally touring act. During my time with the band, we’ve headlined world-class venues including Red Rocks, toured Japan several times, and played festival sets to more than 25,000 people.

I tried to channel all that I have learned on my drumming journey into our new album Frames Per Second. We recorded nineteen songs live and had a video team film the entire session. I played in a minimal style on the album in order to support the strong compositions written by Jesse and Luke Miller.

The fan feedback for this album has been overwhelmingly positive and it has been gratifying to mix new songs into our live sets. Lotus returns to Red Rocks this spring and we have some exciting runs planned. I am looking forward to showcasing our new material!

In addition to playing with Lotus, I still enjoy playing with different bands. This month alone I am playing with six projects. Performing with diverse musicians keeps me on my toes and helps me approach drumming from different perspectives.

While on the road, you can see me playing my Sonor Newport kit, Craviotto snare, and both Zildjian and Sabian cymbals. I also use JH Audio Roxanne IEMs and a Porter & Davies tactile throne. I am still clinging to my Johnny Rabb sticks, even though the company went out of business years ago. Finally, my favorite piece of equipment is my Stanley blower fan. Without it, I would be a mess.