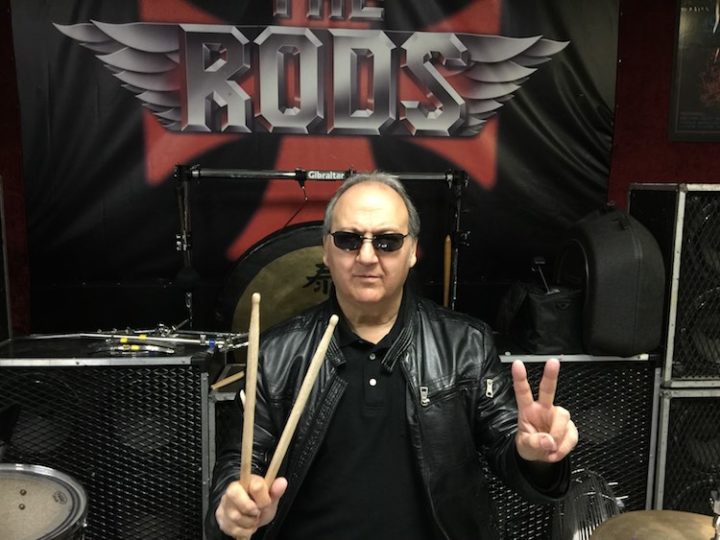 Hi MD Readers! I’ve never been much of a self-promoter, as it’s always felt a bit self-serving. Having said that, I’m so thrilled to be doing this for MD (my favorite magazine for decades), so I’m going to make the exception and offer up some of my credits.

Some of you may know me as the drummer for the Rods, the band David Feinstein (Ronnie James Dio’s cousin) and I started in late 1979. We’re going on forty years together, and I’m amazed that we’re still doing this after all that time. I was also the first drummer for Manowar.

Some of you may also know me as a producer. I’ve produced more than forty albums; some of them include Anthrax’s Fistful Of Metal, Armed and Dangerous, and Spreading the Disease, as well as Overkill’s Feel the Fire and Blue Cheer’s The Beast is Back. There are truly way too many to list here. I’ve also recently produced a single that featured Joe Lynn Turner as a guest vocalist.

I wanted to play drums since I was five years old and saw a drumkit at a wedding—that was it! My first teacher was very negative. He told me I’d never be a N.A.R.D. certified drummer (eventually I was certified). Answering an ad in the Musician’s Union paper for Carmine Appice offering lessons was a blessing. When I was twenty years old, I began studying with Carmine and it changed my drumming and my musical career. I can never thank Carmine enough for his teachings, and for his kindness and knowledge. It put me on a path that I otherwise would not have traveled. I was also fortunate to study with Tony Williams. He taught me about his approach to music and feel and that is something I use to this day in my productions.

Drums have always been my first love and passion. However, I love to write songs on guitar and piano. I have about eighty-five songs on my BMI song list. My career highlight as a songwriter was when Ronnie James Dio sang a song I’d written called “The Code” shortly before his passing.

After seven years, the Rods have released a brand new CD on SPV/Steamhammer titled Brotherhood of Metal. I co-wrote the title track with David. I also contributed the song “1982,” which has been a favorite of the reviewers. As a songwriter I’ve written one third of the songs on the Rods albums. I also have two new projects that are near completion. The new Canedy album is a band endeavor and the other project is St James, with the addition of former singer Rhett Perez, of Young Turk. We recorded the album in Miami, and it’s ready to mix.

I try to play live as much as possible. I did a fill-in date at the House of Blues, Anaheim in January, opening for Metal Allegiance. I’ve been playing in an eight-piece horn band for more than twenty years when I’m not on the road with the Rods. I’ve also (mostly) been recording my drums at home for the past ten years. I recently played on Federica’s new single and a few other tracks for artists such as Jim Crean and Jack Starr. I still record and release songs with my band from the ’70s, Kelakos, and am also five songs in on an album of cover tunes called Under the Influences. I really enjoy doing different arrangements to songs I’ve always loved.

As a producer/engineer, I’ve always been interested in arrangements and love to record. It’s served me well as a producer! I had a thought-provoking experience in Paris around 1987. I don’t dance, so when I went to a club with my friends I wound up sitting all night as a spectator. At first I thought it was going to be a snore fest, and then it turned into an epiphany. The dance songs would usually start with a simple quarter-note band drum intro. I started to see which tempos got the strongest reaction from the dancers. Certain tempos would simultaneously elicit a reaction from all around the club. I came away that night realizing that I needed to have my tempos spot on for every song I recorded. This may sound oversimplified and I don’t mean give the impression that I didn’t work on my tempos, but for me it was an eye opener. It took me back to the old blues artists and how they tapped out the feel, and how organic that was. They internally knew what the tempo should be for their songs. I realized I needed to hit that organic “sweet spot” with whatever style of music I was doing, from rap to metal. I now really focus on not only the groove but also the tempo.

As for gear, I have a number of vintage snare drums I use to record. My favorite was a gift from a close friend, Al Falso, who owned a music store. Before he passed, he gave me his Slingerland Radio King snare drum from his first kit that I cherish. I also have a custom 7×14 Pearl Maple Custom with wood hoops that I added. It’s a very fat sounding drum. As with most drummers, I have quite a number of snare drums.

I have several kits, including a 1971 Chrome Fibes. I applied polyurethane inside the drums because I’d heard that Billy Cobham had done that with one of his kits. I poured it while the drum was on its side, and rolled it over and over until it had a very thick gloss. The drums, as a result, have a truly distinctive sound. They can be heard on almost all of the Rods’ albums, with the exception of Brotherhood of Metal. The one kit I could never part with is my 1950’s/1960’s Ludwig Blue Sparkle kit. I started buying the kit piece by piece, as I could afford to, until I had a double bass kit with six toms. It sounds great and I toured with it for close to eleven years. 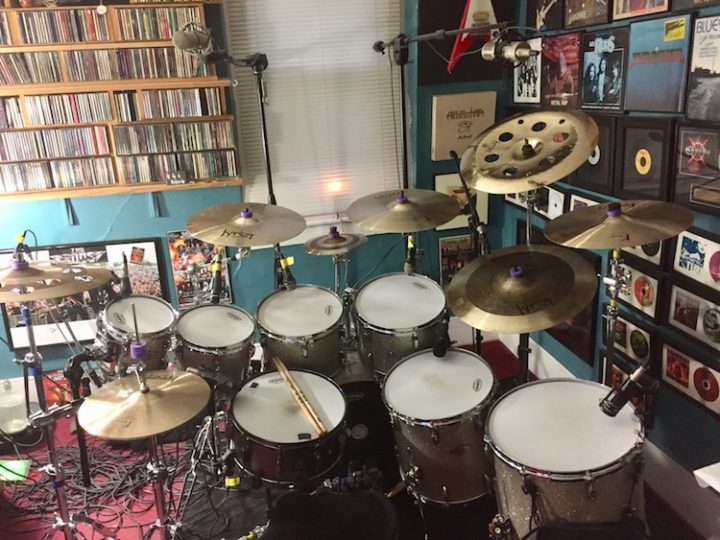 My recording kit is a Crushed Glass Pearl Masters Maple shells—8″, 10″, 12″, 13″, 14″, 16″, 22″. These drums have never left the house! Live, I switch between two Pearl Silver Sparkle kits—8″, 10″, 12″, 14″, 16″, 22″. I have several double kick pedals, but the Tama Speed Cobra is hands-down my favorite at the moment. My sticks are Vic Firth 3As with the Rods logo and my signature imprinted on them (to make me look cool). I also have Kasza cymbals, which I love. And Evans drumheads have been such a great company to be associated with as a musician.

Music I’m currently listening to includes Sabaton, Dirty Honey, Gojira, Winery Dogs (first and second albums), Jimi Hendrix Are You Experienced (rediscovering Mitch Mitchell), Sons of Apollo, Slash Living the Dream, the Beatles almost daily, Last in Line, the Dead Daisies, and Greta Van Fleet. I also love hearing new bands and how the drumming is approached. I love trying to play the feel as closely as I can to the original; it keeps me learning new ideas and approaches.

Thanks for taking a moment to read and indulging me. Thanks to Modern Drummer, and all of my reps and companies: Evans drumheads, Vic Firth sticks, Kasza cymbals, Cympad washers, and KellyShu. I’m always humbled and appreciative!

For more on the Rods, visit www.TheRods.com.

And for more on Carl, visit www.facebook.com/carl.canedy.