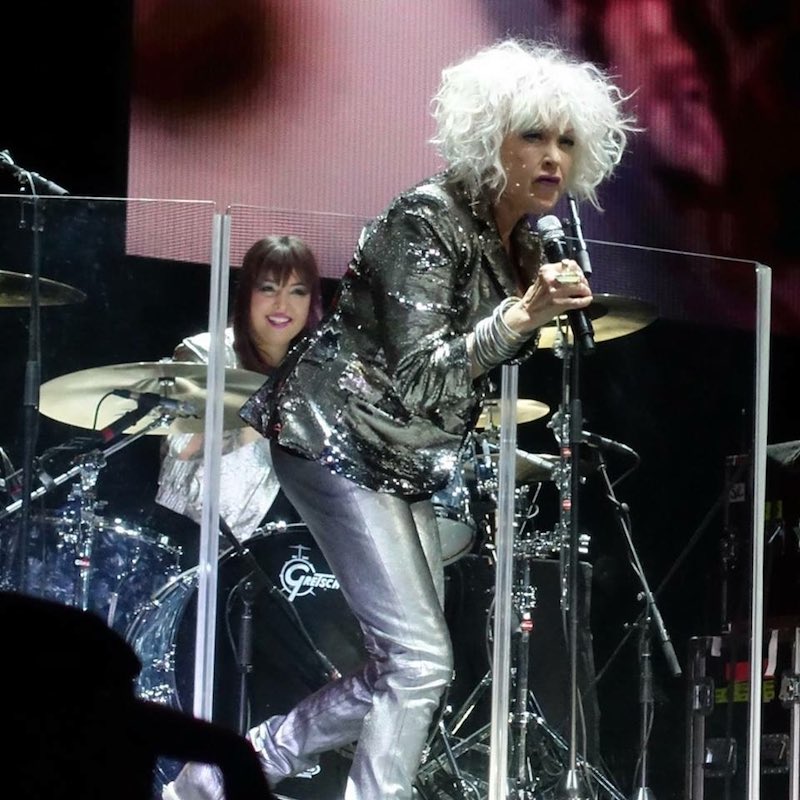 Talking About Audition, Tours, and Gear

Hey everyone! It’s Caitlin Kalafus and I’m excited to be back “On The Beat!” A lot has happened since I last checked in. Back then I was just heading out on the Vans Warped Tour for an incredible summer with the Brooklyn-based band Mother Feather. After that, I finished my last semester of college and graduated with a BFA in graphic design. I moved from Connecticut to Philadelphia, recorded some original music, and began spending my weekends in NYC playing drums in a band called Almost July.

Living in a new city was great, but being a musician wasn’t paying the bills. Having that BFA in graphic design came in handy and landed me a marketing job at a major financial firm. I won’t bore you with details but I spent a lot of time daydreaming about touring and making it as a full-time drummer. Six months into that job, I heard from an old friend who was working in the music industry. She told me she overheard a conversation that Cyndi Lauper was looking for a female drummer and asked if I was interested in sending in some videos, which of course I was happy and excited to do. A few days later I got an email inviting me to audition. This was the break I needed!

However, life took a turn for the worse. A few weekends before my audition, while spending time visiting family, something unthinkable happened. The last thing I remember was a car crossing the double yellow line coming right at me at 70 mph. I woke up in the hospital with numerous injuries including a broken right foot. With just weeks to prepare for the Cyndi audition I was suffering physically and emotionally but I was determined to fight, move forward, and do my best.

The day of the NYC audition it was really hot weather. I was on crutches trying to balance my cymbals on my back and a double kick pedal case slung around my shoulders. I relearned all the beats with my left foot controlling both the bass pedal and the hi-hat. What a challenge that was! I entered the studio and immediately saw Cyndi. She was in shock that I showed up on crutches with a cast up to my knee. She asked me “how I was going to play in that condition.” I looked her straight in the eyes and said, “I promise you. I’m not here to waste your time.” Thankfully she let me audition and I scored the gig on the spot!

Having just weeks before the tour, I had to work really hard with physical therapy to get my right foot back into playing shape. A year later I’m still not 100% and I’ve had to adapt my playing but I’ve learned one big lesson, I will never let anything stop me from doing what I love. This past summer I toured with Cyndi across the US and Canada opening for Sir Rod Stewart. It was a blast playing in front of huge enthusiastic crowds at so many iconic venues.

My setup with Cyndi included my brand new Gretsch Brooklyn series kit with the Abalone finish. My snare is a 6.5×14 chrome over brass, I have a 9×13 rack tom and 16×16 floor tom. My bass drum is 18×22. I play all Gibraltar hardware and Zildjian cymbals. My cymbal setup includes 15″ New Beat hi-hats, a 10″ splash, 17″ K Custom Hybrid crash, 19″ Projection crash, 22″ Medium ride, and 16″ A China high. This is my favorite setup that I’ve had because the kit just feels like it was meant for me! Once I knew I got the gig, I spent some time picking it out and its first appearance was on stage at the Hollywood Bowl. And when I heard about Vater’s Nude series, I had to check them out for myself. After falling in love with the feel of the sticks, I switched from Manhattan 7As to Nude series, 5As.

Following that tour, I began playing with a lot of musicians in NYC such as Jill Sobule, the band Betty, and even had the amazing opportunity to rock out with the 8G Band on Late Night With Seth Meyers for a week. Currently I’m touring with Tap Dogs playing drums and percussion. The show consists of six tap dancers, the fantastic Noriko Terada, and myself. Noriko and I accompany the dancers from our towers high above the stage. I play a standup kit consisting of three toms, an electronic kick and snare, two crashes, hi-hats, and timbales. Being primarily an ear trained musician, it was a challenge learning the provided sheet music but it’s been another great learning experience not to mention being able to play on a tower that rocks back and forth the entire night! Performing with the tap dancers is so different than anything I’ve done before and I’m honored to have the opportunity to be a part of this unique show.

Well, that is what I’ve been up to lately. I am grateful for the opportunities that have come my way and I’d like to leave you with a few thoughts: life is full of obstacles so always be prepared, never ever give up and remember, you can achieve anything if you set your mind to it.

Check out this video to see one of my favorite moments on tour with Cyndi last summer here:

Here’s a clip from my tour with Mother Feather on Warped Tour: