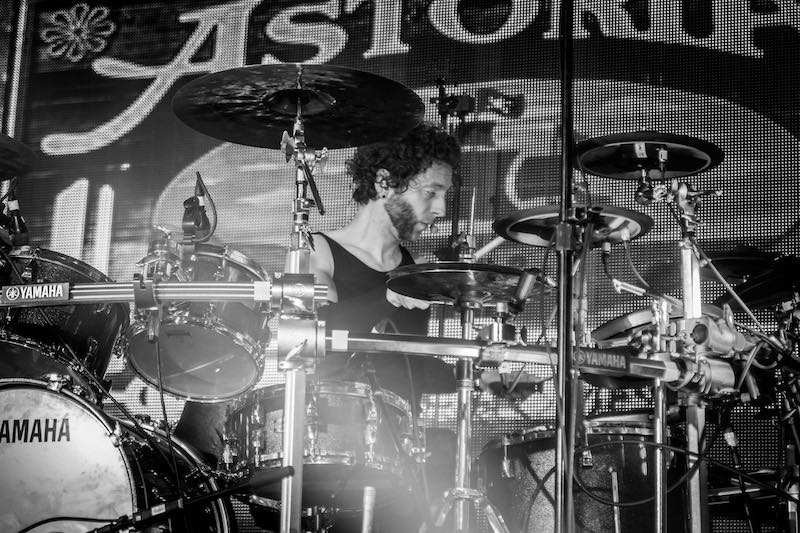 Hello MD readers! I grew up reading Modern Drummer and I’m very excited to be a part of “On The Beat!”

My name is Ian Casselman and I play drums for the band Marianas Trench. We are a vocal and harmony-oriented band influenced by Queen and Jellyfish and our fifth studio album, Phantoms, will be out on March 1, 2019. For those Jellyfish fans out there, we were very fortunate to get one of the band’s founding members, Roger Joseph Manning Jr., to do a feature on our song “Echoes of You.” It is such an honor to be in his company.

We are embarking on our Suspending Gravity tour in Canada in March and in the US in May/June to support our new album. Playing live shows is one of the greatest things for me as a drummer and getting my chops up practicing new tracks makes me fall in love with drumming all over again.

Our last three albums have all been concept albums and we are doing the same again with Phantoms. We always try and change our sound up from record to record to challenge us, keep things fresh, and also give the listener a new experience. Changing up one’s playing style can be quite a daunting task, but it keeps me on my toes and keeps my mind engaged.

I honestly listen to everyone and everything I can get my hands on, but if I have a hero, I would say it is Jeff Porcaro. The man could just groove all night long. I admire his smoothness and his ability to cater to exactly what a song needs.

I’ve been a Yamaha, Sabian, Remo, and Vic Firth guy for as long as I can remember. My favorite pieces of go-to gear are my new Yamaha Recording Custom drums and my FRX cymbals. These new Recording Customs could possibly be the best sounding drums on the planet and I have the ones in Surf Green! They have so much richness and tone that I can now die a happy man.

I also really love my Sabian FRX cymbals—if you’ve never heard of them you must check them out. They were designed for drummers who play smaller rooms but I use them absolutely everywhere, including arenas and larger festivals. With all four members of my band having a vocal mic on stage, drum and cymbal bleed can be pretty intense. At times, and before I had my FRX, I found myself having to contain my playing to avoid taking over the live mix (at the request of my sound guy of course). These cymbals absolutely rule, they have tons of body and character, and after the initial attack, they get out of the way so I can play with maximum energy. My sound guy no longer hates me!

Thanks for reading and see you out on the road!