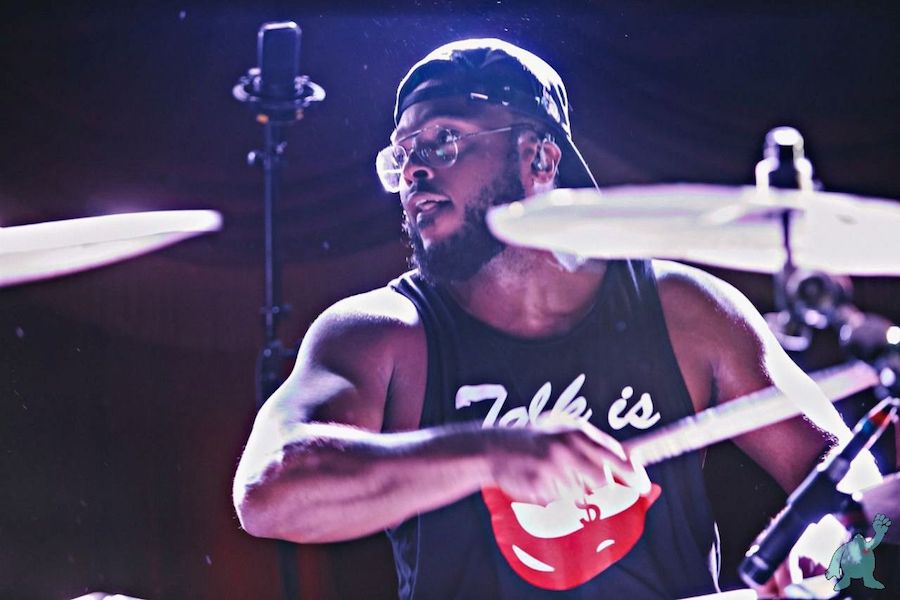 Hello MD! I was exposed to tons of music as a child due to my dad and older sister playing records and tapes throughout our house. My dad was very musical and loved to sing. We went to a small church that didn’t have a full band but did have a drumset. My sister decided to play the drums during the service, even though she was only sixteen and had never played before. Later that year she was late to a service, so I hopped on the drumset to play. The congregation erupted when I started playing because I was only six years old at the time. It’s a memory that will always stick with me.

I started staying up way past my bedtime to record late night hip-hop radio shows on cassette. The artists ranged from Finsta Bundy to DJ Premier, Gangstarr, and A Tribe Called Quest. Hip-hop is what everybody listened to in the neighborhoods that I grew up in. We connected with it because it was like having our experiences turned into musical form.

I didn’t have many resources growing up. I didn’t get lessons and didn’t go to music school, but I used to share tapes with my music buddies. When I was old enough to go to the music store, I would sit at the drums and teach myself for as long as they would let me. I did this day after day until a local private drum instructor named David Capuzelo heard me and gave me his own room to practice in. He was the first professional who really believed in me.

I use music to communicate my experiences. To me, music is a language and method of self expression. I’m very close to the drumset and I share a lot of myself through it. I draw from all of the personal experiences that I’ve ever had—every person that I’ve ever met, every moment I’ve been happy, every time I’ve been sad, angry, heartbroken, or excited.

I started The Lesson GK in 2012 because I was having trouble finding shows in NYC where bands pushed musical boundaries to make fresh new music. I wanted to create a show that did just that, so I merged a diverse group of talented friends who wanted to experiment together every week. Back then, we called the band “Gentei Kaijo” which means “limitation cancellation” in Japanese. This best describes what we are hoping to do—to break down barriers through our music and connect on a deep level with each other musically. In doing so, we hope that the audience will connect with the music as well. We’ve had a weekly gig at Arlene’s Grocery (in NYC) on Thursday nights for six years. We’re taking a break for a few months, but will be back!

I guess you can call our music experimental hip-hop, R&B, and progressive soul. We’re very dynamic given the diversity of the musical and personal backgrounds of each band member. Our singer is a double Grammy winner soul singer, our emcee is a great hip-hop freestyler from the Bronx, our keyboardists are heavily influenced by funk, pop and jazz, while our bass player is influenced by jazz and hip-hop. When we play, we’re able to synthesize all of these elements. Our live performance is all improv, so it’s raw and alive. Each time we play, something different happens. We listen closely to each other and find harmony in the midst of the diversity.

Currently I’m looking forward to finishing an album and touring as a group. We’ve performed more than four-hundred times in NYC and have created over a thousand songs at these shows. We’re going through the recordings of these to pick out our favorite songs which we’ll record for our first album. We’re excited to perform outside of the city once the album is complete. We also want to shoot more live performance videos. Zildjian invited us to their headquarters a few months ago to shoot a video of us performing a song we call “The Weekend.” The song is on YouTube and I couldn’t be more proud of it! See link below to watch.

For my gear, just give me something to hit, and I’ll make it work! I’m untraditional in that sense and practiced this way for many years. If I had to pick ideal gear, it would be snare, kick snare, hi-hat, fat floor tom, and some crashes. No rides though! I don’t really like them. I just want some fat massive crashes and to tell the drumkit to keep up! My absolute favorite cymbals are by Zildjian because they are so expressive. For sticks I’ve been a Vic Firth fan for as long as I can remember. Their sticks are made in such a way that they themselves feel like an instrument.