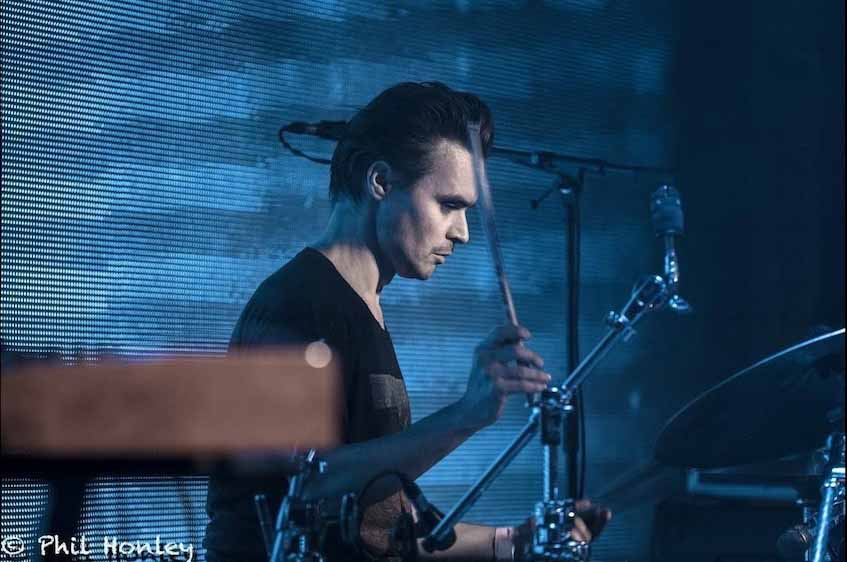 Hello Modern Drummer readers, I’m honored to be featured in my first “On The Beat!”

I was born in Belfast, Northern Ireland and started playing drums at the age of five years old. I moved to the US when I was eighteen, after studying at the Koln Conservatory in Germany with renowned teacher Keith Copeland for two years. The New School was my introduction to the New York scene, and I lived there until 2016. I am now back in the UK, but spending my time between there and the US recording and touring.

Having played jazz for many years with distinguished players like Lee Konitz, Mark Turner, and Sam Yahel, my touring life began with my band Ambulance LTD, then Lauryn Hill, Madeleine Peyroux, and Brandon Flowers of the Killers. I’m currently back in the US touring with indie champions Amen Dunes, embarking on a month long tour across the US. It’s a busy five weeks! My old band Ambulance LTD is doing two reunion shows at the Mercury Lounge in New York City for their twenty-fifth anniversary, doing a record date in Fort Worth and Austin with Elijah Ford, and playing the Jazz Standard in New York.

I play a lot of jazz and rock and I like the challenge of playing both these genres. I’m also a drum professor at the Academy of Contemporary Music in London, and this year I recorded my own jazz trio record, which was featured on BBC radio, and toured the album in Ireland and the UK. I also completed a master’s degree in music.

Having recorded on Brandon Flowers’ last two solo albums, (I co-wrote the lead single “Can’t Deny My Love” on the album The Desired Effect), and working with producers like Daniel Lanois, I’ve learned many valuable lessons in the studio. I’m grateful to have played on more than fifty albums in both the jazz and pop world. For me, it’s all about playing for the song and listening. I cite drummers like Jim Keltner, Steve Gadd, Brian Blade, and Steve Ferrone as great inspirations. These drummers can cross genres with ease.

For my go-to gear, I play Canopus drums—currently using the Yaiba be-bop kit. I like to play small kick drums, and for the Amen Dunes tour I am using an 18″ kick, 12″ rack tom, 14″ floor, and 14″ Zelcova snare. I’m also using the RFM series. These drums are so versatile, I used them at Ronnie Scotts jazz club in London, and the next week they were at the O2 arena in London supporting the Killers with Juanita Stein. I use Aquarian Response 2 drumheads (coated black), Vic Firth SD11 drumsticks, Protection Racket drum cases, and Paiste cymbals. Currently I have the Masters series in my bag: 22″ Dark ride, 20″ crash-ride, and 14″ Formula 602 hi-hats. I feel fortunate to have a great relationship with all these companies, and their support on the road makes touring stress free.

I hope you enjoy the videos below and thanks for reading. Maybe I’ll see you out there on the road!

For more on Darren, visit www.darrenabeckett.com.