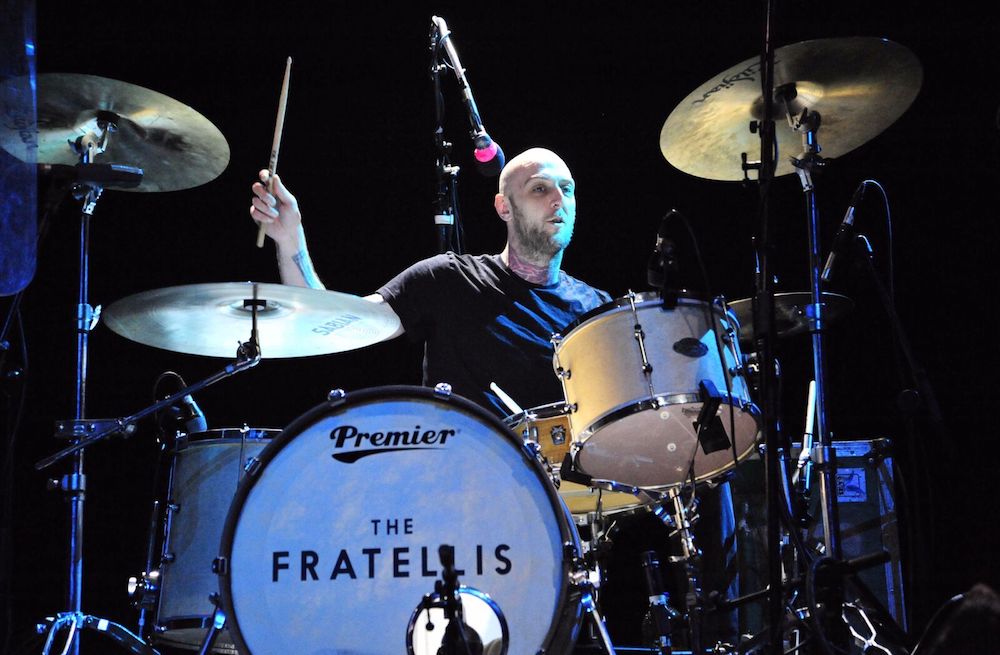 Hey MD! This is Mince from the Glasgow band the Fratellis. Thanks for having me back for my second “On The Beat.” We’re very excited to be releasing our fifth album, In Your Own Sweet Time, and we will be touring all over the world.

I had a great time recording this album. Camaraderie was great between the band, producer Tony Hoffer, and engineer Cameron Lister, where lots of dancing and hilarity went on in the studio and at various bars around LA. I was sharing a room with our bassist, Baz. He’s a fantastic player. As he is also a drummer, his rhythm and timing is spot on. In the morning and last thing at night, we listened to different rehearsal takes and talked through any inconsistencies that needed sorting. During the day I didn’t play anything else but the songs we were recording. I kept my mind focused on the grooves and drum fills, which made the songs easy to record.

It takes a lot of hitting each individual drum for hours when trying to get the best sound from the drums through the mics. When this happens, to alleviate boredom, I always play “March of the Siamese Children” which has a “one drum” beat that changes in feeling throughout, keeping the whole process fun for me.

On this album, I also recorded some extra percussion. I played tambourines, cowbell, and some very strangely tuned drums. For the main drum parts, I played Tony Hoffers’ vintage Ludwig kit with a Black Beauty snare and Zildjian cymbals, which are also the same drums I used to record the first and fourth Fratelli albums.

I’m really happy with how the album has worked out. They’re all great songs, written as usual by Jon (Fratelli). The rhythm parts were fun for Baz and I to come up with and play with real feeling and I believe that comes across in the recording.

One of my biggest inspirations when recording is Snooker Loopy by Chas & Dave. The drums sound fresh and spontaneous throughout. After hundreds of listens, I still don’t know what fill is coming next. You just can’t replicate the take. It changes constantly with the vibe of the song rather than having your usual predetermined drum part. The drummer does what he wants, as he feels it. He gives true meaning to the saying, “march to the beat of your own drum.” To me, this makes it more punk than punk.

Touring is the most fun part of my job because every night is another chance at playing the perfect gig. If I ever need to give myself any motivation or if I get pre-gig jitters, I always tell myself to be better than the kit. Like riding a bike or driving a car, be in complete control. I also remind myself that I have two things to offer—love and talent. I love my band, practice constantly, and I remember to dance and enjoy the whole set to vibe and relax. Thanks for reading and enjoy the new record!