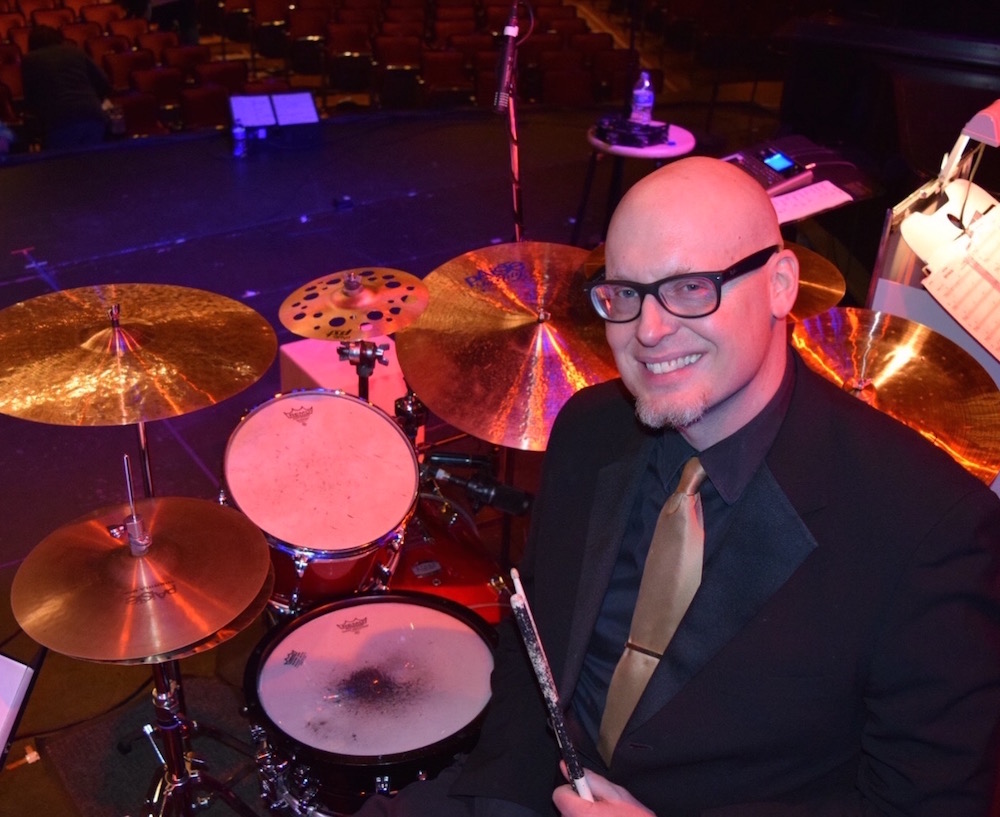 On Saturday, February 18, 2017, we lost a singularly unique artist, Mr. Clyde Stubblefield, known to musicians worldwide as “The Funky Drummer.” Check out the August 2017 print and digital versions of Modern Drummer for a look at Clyde’s life, career, and insights from the man himself, as well as reflections on Clyde and his contributions from old-school drumming peers and the next generation who carry his innovations forward.

In this online supplement to the feature story we will dig deeper to examine Clyde’s innovations to better understand his impact on popular music. I’ll also share some tips from Clyde and reflect upon what I’ve personally learned since first meeting him in Madison, Wisconsin in 1980.

“To hear Clyde play…honestly, I have not figured out what Clyde’s been doing yet. I don’t know if anybody can tell you. But I know this: he has to be one of the funkiest drummers I know.”—John “Jab’o” Starks

This statement by drummer Jab’o Starks, who served with Clyde in James Brown’s orchestra from the late ’60s to early ’70s, is deceptively simple in its profoundness. We can all appreciate the hipness of Clyde’s rhythmic imagination. We can analyze it and transcribe it, but some of us may still miss the point. There’s something intangible about his beat that resonates with so many people—something Jab’o refers to as a “Holy Ghost” feeling. So where does that kind of magic come from?

Born on April 18, 1943, in Chattanooga, Tennessee, Clyde was never formally trained in drumming but was inspired by the parade drummers he watched as a child. His natural talent was nurtured in a very organic way, “Playing on tin can lids, pasteboard boxes—everything,” he says. He grew up very aware of rhythm in everything around him, from the way he walked down the street, the clocks he’d hear ticking all night long in his home, and the factories nearby in the Tennessee Valley.

Things began to evolve quickly for Clyde as a teenager in the mid-’60s. He left Tennessee to work with blues guitarist Eddie Kirkland in Macon, Georgia, which led to road work with vocalist Otis Redding. Then one night in a Macon nightclub, James Brown heard Clyde, offered him a gig on the spot, and the rest, as they say, is history.

Imagine yourself sitting in a club, being heard and hired by a famous entertainer, whisked off to New York City the next day to cut a record, then, over time, watching that recording become not only a hit, but an all-time classic in the funk music idiom with your beat becoming a stylistic standard. Maybe it’s the stuff dreams are made of, but it’s also what happened to Clyde Stubblefield when he recorded “Cold Sweat” with James Brown in 1967.

“Cold Sweat” is a historic track with a classic groove. Of all of Clyde’s celebrated work, it remains the track he is most proud of, perhaps because it, like his drumming, developed organically. Clyde played a beat, the bass player joined in, James sang on top, and just like that, they had a song.

Let’s break it down and check it out…

Here’s the original recording, in which James Brown singles Clyde out with his now famous saying, “Let’s give the drummer some,” and proclaims Clyde, during his breakdown solo, is “funky as you wanna be!”

Now, here’s a clip from Zoro, breaking down Clyde’s classic beat on that track:

I can relate to the part where Zoro talks about the moment most young drummers first sit down at a drumset to play a “Cold Sweat” type of beat. Vic Firth Director of Education Neil Larrivee recalled recently, “Truth be told, James Brown and the tune ‘Cold Sweat’ may be the biggest reason why I became a musician! Man, that reality just hit me!” That’s impact.

Now let’s check out a great live clip of Clyde playing “Cold Sweat” with James Brown in 1968. Pay attention to the differences you see and hear in how Clyde approaches the beat in contrast to the original recording. A fascinating element of James Brown’s show was how they would change up arrangements, tempos, and other approaches to the music to keep it fresh and unpredictable.

The World’s Most Sampled Drummer

If any of us drummers could claim the type of achievement Clyde did with “Cold Sweat” I’m guessing we’d all be pretty satisfied. But for Clyde, well, he was just getting started.

The body of work Clyde recorded during his tenure with James Brown includes several more classic hit records, all popping with his signature beats and feel. Before we discuss them, let’s address the now-common phenomenon of digital audio sampling.

Sampling is defined as “the technique of digitally encoding music or sound and reusing it as part of a composition or recording.” The wide spread use of sampling in popular music originated with the birth of hip-hop music in New York in the 1970s. Sampling is typically done with a computer program. It is also possible with tape loops or phonograph records.

Often, “samples” consist of one part of a song, such as a drum break, that is cut and pasted for use in a different song. This is where the story of Clyde Stubblefield moves into a new direction entirely.

Today, Clyde is recognized hands-down as “The World’s Most Sampled Drummer.” The title certainly carries an air of prestige, does it not? After all, you’ve got to have something seriously good happening in your work to arrive in that position. But what does it really mean? What, for example, are the implications of such a title for the real-life necessities of your livelihood? Well, before we consider that, let’s check out this entertaining and informative mash-up of the most commonly sampled drum breaks in hip-hop and drum and bass music:

Good stuff, no doubt, and I’ll bet most of you recognized more than a few of those breaks. Did you know that no less than four of the samples we heard excerpts of in the clip feature the drumming of Clyde Stubblefield?

They are (in the order you heard them):

Each track, it should be noted, is representative of Clyde’s work with James Brown.

Some of you might recognize the “Think (About It)” sample from Vinnie Colaiuta’s 2007 solo release (track 1 on clip):

“Soul Pride” and “Tighten Up” come from the compilation CD Soul Pride: The Instrumentals (1960-1969). They have each been sampled many, many times. Here is an example of how Clyde’s break from “Tighten Up” is typically distorted by being cut and sped up to provide a relentless drive, drum and bass style:

The break on “Funky Drummer,” however, is a phenomenon unto itself, believed to be the world’s most sampled recording. It was originally released as a single in 1970 and was re-released on the popular 1986 compilation, “In the Jungle Groove.” Take a quick glance at this website for a partial listing of artists who have sampled Clyde’s drum break for their songs. Note that some artists use the sample on several of their songs: http://www.the-breaks.com

It’s such a tasty, funky and hip beat, let’s check out this classic track:

Now let’s contrast the original with one of the most popular rap tracks to use the break beat sample, Ice-T’s “O.G. Original Gangster.”

Clyde, to his credit, is most eloquent and realistic on the subject, which he addresses in detail in this live interview with the influential DJ and record producer, Marley Marl:

There are those, fortunately, who have credited Clyde for his contribution. One, in particular, is the iconic producer and drummer Butch Vig—another Madisonian who opted to hire Clyde to play on his band Garbage’s platinum debut album rather than sample him. “You don’t use a sample when the genius who played the sample lives down the street from you,” Vig has stated. Listen for the contrast between Clyde and Butch’s feels on the band’s hit, “Queer.”

Give the Drummer Some

In closing I want to share some great tips I learned from Stubblefield. Clyde, who was not formally trained, had gifts that many drummers strive for but few truly possess. He didn’t teach traditional drum lessons, but was a wonderful mentor to me as well as to so many other musicians throughout his career.

You can see an excellent example of this in the following clip. Although the sound quality is amateur, the focus stays on Clyde, offering a perfect strategic view, and, though you can’t hear the band too well, you’ll experience his inter-dynamic balance and feel perfectly:

I finally got the message and today I pass it on. Clyde always encouraged me and I received a bandstand education from him, which was quite a gift. I’ve had the true pleasure to produce, perform, and record with him in a variety of musical situations over the years. It’s easy for me to sing his praises; he’s inspired millions. His playing may very well be the most heard drumming on the planet. He was a fun-loving guy, a kind man, and very brave. I loved and appreciated him deeply.