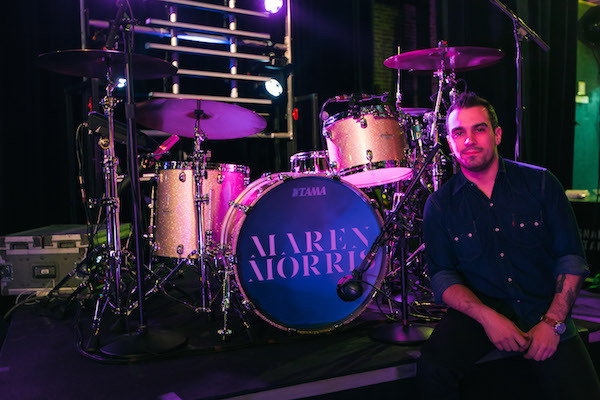 The sticksman behind a rising country star talks touring and offers advice for up-and-coming players.

Nashville-based drummer and producer Christian Paschall will be on the road supporting the country singer and songwriter Maren Morris on a tour that lasts from this June 1 through late September. Paschall’s solid feel, deep groove, and unwavering time have supported the rising artist on her 2016 tour with Keith Urban, a headlining trek earlier this year, and a slew of high-profile television performances, including a 2017 Grammy appearance where Morris also took home the Best Country Solo Performance award. Modern Drummer asked Paschall about bringing Morris’s studio work to the live stage, his move to Nashville, and more.

MD: On several TV performances with Maren Morris, you have such a great, solid feel. Do you play to a click live? If so, are there any challenges in maintaining a solid feel with a metronome?

Christian: Yes, we do play with a click track live. It’s kind of the reality of most “pop” music these days that you play with a click. I know some guys struggle with the concept, but I honestly love it. It’s just one of those things I’ve done for a long time and have learned how to play with.

That said, there’s no law that says I need to play every song right on top of the click. I may choose to place the beat a little ahead or behind, for example. A musician’s feel is in his or her relationship to the beat. To me, a click only serves as a musical “true north.” Where we place the beat in relationship to that is what gives the music feel.

MD: Have you ever worked on any timing exercises?

Christian: I have a background in marching band and drum and bugle corps, and we spent a lot of time in those days working on timing. When I got out of that world, it took me a minute to kind of unlearn some of that rigidity, but luckily most of the good parts of the experience seem to have stuck. We spent a lot of time rehearsing and warming up to a metronome, so I think that really helped me establish a good sense of time.

These days I sometimes work on different brief exercises at home on the kit to make sure that my timing is solid in my feet. I don’t have a specific exercise regimen or anything like that. I just try to get creative. More often than not though, I end up doing some variation of something I did back in the drum corps days.

MD: In some of the studio videos on your website, and even live, you seem to have such a consistent sound. What would you work on to develop sound consistency?

Christian: Just because our instrument makes a comparatively short sound compared to, say, a guitar, it doesn’t mean it doesn’t have a tonal quality. Whether you’re playing rock, jazz, or whatever it may be, I would just say to pay attention to your dynamics and tone and be sure they’re consistent throughout the song. For example, be sure that the fortissimo backbeats of your rock groove sound the same in each bar.

Christian: Funny you bring that up. I’m actually now playing that on a side snare on top of a loop. Maybe I’ll bring the pad back! To answer the question, though, I’m not really sure. I just do my best to make it feel like the record. The feel of the pad is obviously a little different from that of a drum, but I just adapt and try not to think too much about it.

MD: In terms of drum sounds, do you usually try to play everything live as opposed to playing along to loops?

Christian: I love playing with loops—I love the feel it imparts on the music. Modern production often utilizes loops and other programming, and to me those are different instruments from a drumset. If there’s programming on top of an acoustic kit on a record, I like to approach it that same way live. Having said that, if there’s a shaker track and I have a free hand—on “I Could Use a Love Song,” for example—I definitely like to play that kind of thing rather than put it on a track.

MD: What was the transition like coming from Atlanta to Nashville? How did you expand your career in a new city? Did you have to start from scratch, or did you have a network in place?

Christian: When I moved to Nashville, I was playing with another artist whose band mostly lived there already, so I had a lot of friends waiting on me when I arrived. While I think that certainly helped me get started, Nashville is a city with a massive music scene and an incomprehensible amount of talent, so I was definitely starting from scratch in many ways. Fortunately it’s also a city with a lot of very kind and welcoming people who are great about championing others.

MD: As a drummer who records for artists remotely, do you feel that it’s necessary for up-and-coming drummers to move into a bigger city to start their careers?

Christian: I think it depends on what you want to accomplish in your career. As much as I hate to say it, I believe that even in this day and age of the internet and remote recording, being in a music hub like Nashville or L.A. is necessary to build a long-term career in commercial music. Sure, there are exceptions to that. But most of the music we hear is recorded in one of those two cities, so it makes sense that that’s where the majority of the work would be.

The internet hasn’t changed the fact that people still want to work with their friends. If I’m producing a record, it doesn’t make sense to have someone in Tulsa play guitar on it when my friend that I hung out with last night is a killer guitar player and lives here in town. That’s not to say that I never work with people outside of Nashville. I just think that if you’re an up-and-coming musician who wants to build a career in commercial music, move to Nashville or L.A., meet people, play with people, and come up in the industry with people. There’s plenty of work to go around…unless you’re a schmuck. In that case you can just stay wherever you are!

MD: Beyond playing drums with Maren, what other types of responsibilities do you have as bandleader in the group?

Christian: Most of what I do as bandleader involves being a point man for the band. I’ll also assist Maren in coming up with set lists, operate Ableton, run rehearsals with the band, and make sure they have everything they need to do their jobs well. Sometimes my role is more musical in nature and may include working out arrangements, making changes to the backing tracks, making changes to the show, and more.

MD: What’s it like playing with Maren live? Do you stick to the recordings, or is there ever any room to improvise?

Christian: When I learn an artist’s album, I do my best to learn everything exactly as it is on the recordings. Then when we get into rehearsals and the energy of the show begins to come together, I’ll start to throw a little of my flavor on it. But I still try to stay true to the parts and spirit of the record.

MD: Could you describe your drumming setup?