Seasoned drummer Josh Eppard is currently on the road backing the progressive-alternative rock band Coheed and Cambria on a nearly thirty-date national trek that lasts through May. The group is exclusively playing its third album, Good Apollo, I’m Burning Star IV, Volume One: From Fear Through the Eyes of Madness. The 2005 recording, which saw the band adopt more of a progressive sound while retaining its harder yet melodic roots, is the group’s most successful to date. Modern Drummer recently asked Eppard about the tour and more.

MD: What’s it like to revisit the Good Apollo material for the current tour?

Josh: It’s dredged up a plethora of emotions, but the most prevalent one is excitement. When you’re lucky enough to be in a band for as long as Coheed has been together, these records become like time capsules. The little things that come back as you listen and play these songs can be quite powerful. Claudio [Sanchez, lead vocals and guitar] told me as he was sifting through some of the deep cuts that we haven’t played live in over a decade, “Man, this was such an ambitious album.” And I believe Claudio was having his own reflective moment with the material. Listening to these songs deeply, the way one would when you’re preparing to play them live, brings on a flood of memories and feelings, and I’d imagine that those feelings are pretty unique to the individual. For me, it’s been such a powerful look back and truly affirms just how transformative music can be.

MD: How do you physically prepare on the drums for longer tours?

Josh: Playing drums for 90 to 120 minutes a night is a grueling and daunting task. Don’t get me wrong—I love my job. But there’s a physicality to it that I think many people overlook. It ain’t all fun and games. I run six to ten miles five to seven times a week just to keep my stamina up. About six weeks out from a tour, I up the training considerably. When I was twenty-one, none of this mattered. I had all the energy in the world. At thirty-one, I realized that if I want to play hard and bring the kind of energy to our live show that I do, then I’d better get in shape. I couldn’t imagine playing a show without being physically prepared. So as I sit here today, my routine consists of a three-hour workout routine and a ten-mile run. An off day for me is just the run. It’s not easy. But to do this like I do it, it’s all part of it.

MD: Does this tour cover both volumes of Good Apollo? And if so, how do you approach learning another drummers’ parts? Do you play them verbatim, or do you have room to put your own interpretation into the music?

Josh: This tour won’t be both Good Apollo volumes. They’re different records, and although they’re thematically linked, I think each albums carry its own identity. This tour is all about Good Apollo, Volume One.

I have plenty of experience, though, as far as playing other drummers’ parts, since we play songs from Good Apollo, Volume Two and Year of the Black Rainbow—the two albums I was absent for—on tour frequently. I’d like to think I adhere to the outline that exists while incorporating my own feel and finesse into the piece. Anyone that hears us play Good Apollo, Volume Two live could attest to that. It’s in the realm of the record, but I feel confident that I’ve made it my own. That’s pretty much the approach with any material I didn’t record.

MD: What’s a typical day on tour like with Coheed?

Josh: Touring is all about routine. And a typical Coheed touring day goes like this: Wake up. Rock. Go to bed. [laughs]

Usually it’s a light three- to four-mile run before soundcheck just to warm up. The day’s routine consists of whatever tech work needs to be done that day. I like to change my own heads and help get the kit in shape. Then it’s soundcheck, press, meet-and-greets for the day, and dinner, and then the real work begins. I stretch and warm up for the show, which is about a ninety-minute routine.

Josh: Warming up is a vital part of a good show for me, so it’s paramount that I get in my full routine and feel good and loose for it. The routine is nothing fancy. There’s a lot of stretching and slow single strokes on my Evans pad. Slow becomes medium until I feel loose enough to throw some quick strokes in, and then I know I’m getting there. Single strokes become doubles, paradiddles become five-stroke rolls, and when I can comfortably move between patterns and my hands don’t hurt, I’m there!

I see all of these elaborate warm-up routines, but I’ve always been the kind of player that finds his own way. And to me, that’s the beauty of being a musician. Everything I do is technically “wrong.” I taught myself by watching and listening to my favorite players and carved out my own ways. God, thinking back to when I was younger…I’d warm up for ten minutes and be good to go. Not anymore!

MD: Is there any room for improvisation in the band’s live show, or do you generally stick to the recordings? And do songs evolve at all as tours progress?

Josh: Any touring musician will tell you that over time songs absolutely evolve. I guess in a sense you could draw a comparison to how I would handle playing other drummers’ parts. There’s a guideline, if you will. But inside of that guide there are many opportunities to expand on things. And playing a song night after night is a great way to know a piece so well that you naturally start to toy with those opportunities. Coheed songs always evolve live, while staying within the parameters set by the original recording.

MD: When practicing, what do you work on?

Josh: Practice for me is based on anything I can’t do. A wonderful drummer and a source of great inspiration for me, Chris Gartmann of the band Three, told me, “Practice anything you can’t do.” That always spoke to me. Every player has a home base, or things that come naturally to him or her. For me, practice is about those things that don’t feel natural—the things that are tough. The biggest part of practicing, in my opinion, is being comfortable. I have to be comfortable and feel like no one is listening. Then I can really dig in, and be free to sound bad! [laughs]

MD: Are there any musical qualities that some of your favorite drummers or influences have or share?

Josh: I’m not sure. I’ve always considered myself a product of my influences, but I’m not sure if I share any of the same musical qualities as my heroes. That’s a good question—I wish I knew the answer!

I guess one very broad quality is that we love music. You’d think that goes without saying, but playing music takes an enormous commitment. A lot of my main influences aren’t super famous drummers. The aforementioned Chris Gartmann, or my brother, Joey, and my father, Jimmy, are influences on me both personally and professionally. I’m sure we do share some of the same musical qualities, but that’s because they taught them to me! I’m not sure how much of that is us sharing those qualities or them passing them down to me.

I love playing with different Sabian cymbals, and they’ve been such a great ally to Coheed over the years. I usually pick cymbals that I feel fit the live set list. On Good Apollo, Volume One, the cymbals were crisp and concise, and I was toying with the idea of using some different Sabian cymbals on this tour. I even reached out to Applehead Studios and spoke with the producer of Good Apollo, and I asked him if he has a gear list of exactly what we used! And as always, I’ll be using my Evans EC2 clear heads on my toms and an Evans Hybrid on my snare. My setup has always been simple. Levon Helm told me when I was eleven that even four drums were “too many damn drums.” [laughs] 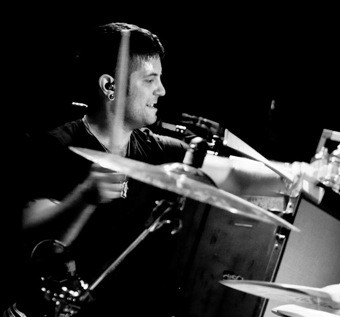 Sam Anderson with Maylene & the Sons of Disaster

On the Beat With Sean Heenan of Attila: Crazy Hot Days on the Warped Tour