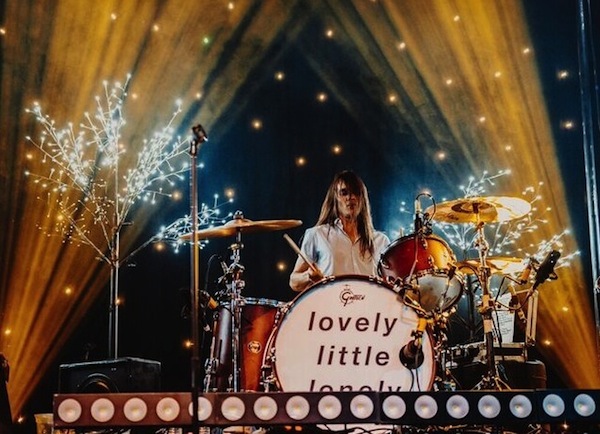 Hello Modern Drummer readers! I’m Pat Kirch, drummer for the Maine and we’re based out of Phoenix, Arizona. We recently started our world tour in support of our new record Lovely Little Lonely. We have been a band for ten years now and this is our sixth record. For this album we rented a house in Gualala, California and built a studio to make the record. I’ve built up a collection of gear over the years and we’ve been having fun bringing it to different Airbnb’s and making records.

We try to change the approach to recording with every album as much as possible. For our album Forever Halloween, we recorded live to tape for the first time and learned a lot during the process and got different types of performances than we had ever before. In a world where it’s so easy get perfect drum sounds using samples and triggers we wanted to go in the opposite direction.

After that we recorded drums for our album American Candy in an indoor pool, which was one of the best experiences I’ve had recording drums. We got such a big sound out of the room and that was exactly what we were going for on that album. Most of the drum sound on that record comes from the famous Dave Grohl bell brass snare.

For the new album Lovely Little Lonely we wanted to go for a bit of a tighter drum sound. It was recorded on a vintage Rodgers kit at Flying Blanket studios in Arizona. Engineer Bob Hoag, who runs the studio, gets really amazing vintage drum sounds. We layered multiple drum parts on a few songs and used lots of percussion to fill in a different sonic space.

It’s been tons of fun being back out on the road playing new songs for the first time and I’m looking forward to seeing everyone at the shows!