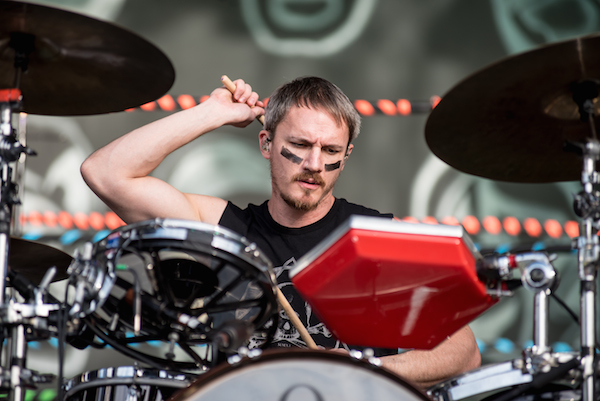 Devo, Puscifer, and Ashes Divide drummer Jeff Friedl is backing the hard rock supergroup A Perfect Circle on its first U.S. tour in six years, with dates booked through early May. While Friedl started playing with the band in 2011, he says that longer musical relationships with APC guitarist Billy Howerdel, bassist Matt McJunkins, and vocalist and Tool frontman Maynard James Keenan give him the confidence to occasionally stretch in between slamming home the group’s powerful songs each night on tour. Modern Drummer recently caught up with Friedl to talk about APC’s tour and more.

MD: How do you prepare for a tour with A Perfect Circle?

Jeff: I generally like to stay in good shape on and off the road, but before I go out with A Perfect Circle or any band I play with that’s physically demanding—such as Devo, the Beta Machine, Puscifer, or Filter—I try to really ramp up my workouts leading up to the tour.

I find that I’m most successful when I work out a lot with my personal trainer, Nat Bardonnet. Aside from that, I just further condition myself by playing through the material on my own and with the band leading up to the tour.

MD: Do you find that you’re able to do any upkeep or practice on the road?

Jeff: Once I’m on tour I try to rest when I have the time. I still teach my students via Skype on my days off, but I really try to give my body rest between shows. Although if it’s a light tour schedule I’ll do thirty-minute post-show workouts with dumbbells and resistance bands to target muscle groups that don’t quite get used while playing.

Jeff: I warm up for about thirty minutes before I go on stage. I start with some yoga and active stretches, meaning I don’t hold the stretches for too long, so my muscles fire appropriately during the show. Next I warm my wrists up with gyroscope balls for five minutes. Then I run through some Stick Control passages and different flam exercises, roll rudiments, and general improvisation.

MD: Do the band’s songs undergo any changes from the records to a live show?

Jeff: Some of the songs have been modified little by little. Some have new intros or outros that have been added over time. On the 2011 Emotive tour, we worked out a new outro for the song “Counting Bodies Like Sheep to the Rhythm of the War Drums” during a few soundchecks, and then we immediately incorporated it into the show. We also slowly developed our newest song, “By and Down,” on the road before we went into the studio to record it.

MD: Do fills or any other parts vary from night to night, or do you try to stay as close to the record as possible?

Jeff: I definitely try to keep the integrity of the songs intact at all times. With that said, I’m lucky to have nothing but trust from Billy, Maynard, and the band to use my discretion to change grooves and fills, and to improvise as I see fit. There are certain grooves and fills that I leave locked in, but there are others that I always play differently depending on what happens in the heat of the moment. I’ve spent a lot of time working with Billy and Matt in Ashes Divide, and also with Maynard in Puscifer, for the better part of a decade. So we have a great trust and workflow with each other.

MD: Do you find that you need to change anything in your setup from tour to tour to accommodate whichever artist you’re playing with?

Jeff: My setups definitely vary from band to band. With A Perfect Circle, I use a Ludwig Classic Maple kit with a rack tom, two floor toms, side snares, and lots of cymbals. With Devo, I use my red Ludwig Vistalites, but I use one rack and a floor tom on each side in a triangle formation, with three crashes and a pair of hi-hats. With the Beta Machine, I use one rack, two floor toms, and two crashes and a pair of hi-hats. My Puscifer kit is my weirdest setup. I use RotoToms, electronics, and a combination of galvanized steel, brass, and copper drums made by Q Drum Co.

MD: What type of electronics do you incorporate into your live setup?

Jeff: With Puscifer I use a couple of ’80s Simmons pads and an electronic kit to trigger sounds. I’m in the process of incorporating Yamaha DTX pads into my Beta Machine kit right now. And with Devo, I have one pad off to the side of my set to trigger whip cracks and cowbell sounds.

MD: Who were some of the drummers that got you started playing? Do you have any specific concepts of theirs that you’ve incorporated into your own playing?

Jeff: There are too many influences to list! Samuel Formell and Changuito Quintana from the Cuban band Los Van Van. Their amazing feels and syncopated rhythms are a big influence on my playing. Vinnie Paul from Pantera, which is my favorite metal band. There’s unparalleled grit and energy. Vinnie Colaiuta. He’s incredible, and his playing with Sting really resonates with me. Playing along with Ten Summoner’s Tales and Mercury Falling really helped me grasp odd meters. I love how he effortlessly flows over the barline in odd meters. Brian Blade. When I heard Joshua Redman’s Spirit of the Moment: Live at the Village Vanguard, I became a huge fan and have been listening to him ever since. And Tony Williams. There’s so much to say…. But Miles Davis’s Seven Steps to Heaven and Live at the Plugged Nickel changed my life.

MD: Live, it seems like there are a lot of fast, powerful fills within A Perfect Circle’s set. What do you use to practice speed or power?

Jeff: I honestly just practice playing through the songs to build endurance. With any band I play in, instead of working on exercises out of books, I generally try to use musical applications to work on speed and power. What better way to work on a problem than to work through it in context? That way you’re always playing musically with whoever it is, and not accidentally blowing chops.