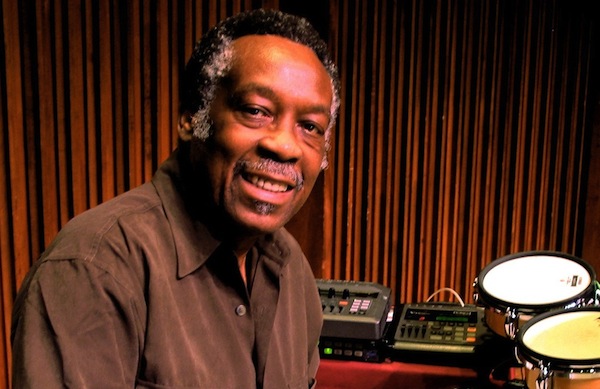 In his September, 1999, cover story on John “Jabo” Starks and Clyde Stubblefield, funk and soul architect James Brown’s famous tandem drum team, writer Ken Micallef wrote, “Clyde’s groove exists in the perfect space all drummers seek but hardly ever find. ‘Soul Pride,’ ‘Sudsy,’ ‘The Chicken,’ and the famous, heavily sampled ‘Funky Drummer’ are what modern funk is all about.”

In preparing for the interview, Micallef found himself in the enviable position of witnessing Starks and Stubblefield record an instructional video for Rittor Music in an upstate New York studio. “On one song,” Micallef described, “the band drops out and it’s just Clyde and the groove. That’s when you hear it, what Jabo calls that ‘Holy Ghost’ feeling. It’s a groove that’s locked in and swinging, rock-hard but greased to maximum effect—the feeling that nothing else exists but that groove. It’s that primal feeling that all people can feel in their gut, and that all drummers cry over with envy.”

The tears shed this past weekend over Clyde were, very sadly, due to his passing. JB had dubbed Stubblefield simply, and for posterity, the Funky Drummer. For drummers around the world, word of his death meant not only the end of a legendary artist’s time on earth, but of the existence of a groove so deep, and wide, and understood, it’s a permanent aspect of our shared musical DNA. Like the man himself, the way he played the instrument was utterly unique, and enormously appealing.

In honor of Clyde Stubblefield’s passing, we reprise his words from that 1999 interview here.

“It’s been fun to play together [with Jabo] and to be able to experiment and not have problems doing it. It’s like being a mad scientist in a way. You can play what you feel as long as it’s done tastefully and within the pocket. We do that pretty well.

“It’s amazing how Jabo and I work. He plays one type of beat and I come along and play a different groove against what he’s playing. And it works! We can’t explain it.

“But Jabo and I come from sort of the same background. We’ve heard the same things. He was inspired to play the drums when he went to a parade and heard the drummers, and it was the same for me. That’s what got us interested.

“And Jabo has always been my idol as a drummer. I have others now, but coming up, from marching drum corps to listening to Jabo with Bobby Blue Bland, I knew I wanted to do that. I never had the slightest idea that I would ever meet this man. [laughs] It just came out of the blue! We were on the same path.

“What I admire about Jabo is his caring and sharing with other musicians. We just have a good time doing our drums, enjoying ourselves, and meeting other people. We don’t care about being big stars.

“It’s funny, every once in a while I’ll play with another drummer, but I can’t lock in and play with them like I do with Jabo. The other drummers want to solo or change the patterns. But Jabo locks right in. We know what we should be focusing on—the groove. I lock in my pattern and keep that all the way through. I might go a little out, but I keep that same idea. Then when I drop down, Jabo doesn’t play my idea, he plays the idea he was playing up front. It’s like switching off, but it’s done in a subtle way.

“Jabo plays his style and I play mine. His snare drum is tighter than mine. Jabo has a beautiful touch—nice and light. I look for a thuddy, fatter sound, but Jabo looks for a sharp sound. You’d think the combination wouldn’t work, but somehow it does.

“When I’m playing drums, I play with a lot of motion. I think that’s what helps me keep the groove going. Jabo’s motion is more inside of him—more subtle—but he still plays with a lot of bounce.

“From my experience of coming into the James Brown organization—Jabo was already there—the big live production that James became known for didn’t start until after Jabo and I were there. Before that he had more of a club show, where they played a few songs, stopped and talked, and then played some more. The whole “bang bang” production that he became famous for wasn’t there until we got there. Maybe we had something to do with that. We got him going.

“[James] would switch us while a song was going on. But the groove would stay strong. That took some doing, but we got it. It’s amazing to think back about that. What a show!

“I consider us to be human metronomes. When I was a kid, going downtown with my mom, I walked in time. You stumble over your own self if you don’t. [laughs] I’d hum a song while I was walking, and I think that’s how I got into the rhythm of drums. Keep it natural.

“I think everybody’s got the ability to have good time. But if you don’t focus in on it, like knowing yourself and what you do with it, you won’t play it as well. Playing the groove is life for us. It’s our breathing. It’s what we’re all about.

“For someone to play the same pattern that we played, well, they’re probably not going to get the same feel we got. You want to play a feeling. Working on the patterns is certainly a good thing to do, but you have to keep the groove in mind.

“We don’t look at the toms as solo drums, but as seasoning for the groove. We didn’t use the toms with James Brown much at all. We focused on snare, hi-hat, and bass drum. We might use the floor tom a little bit, but we didn’t really need it.

“I didn’t know about discipline when I came into James Brown’s band. I just knew that this was the greatest gig I ever had, and my job was to perform. I had to keep it together.”