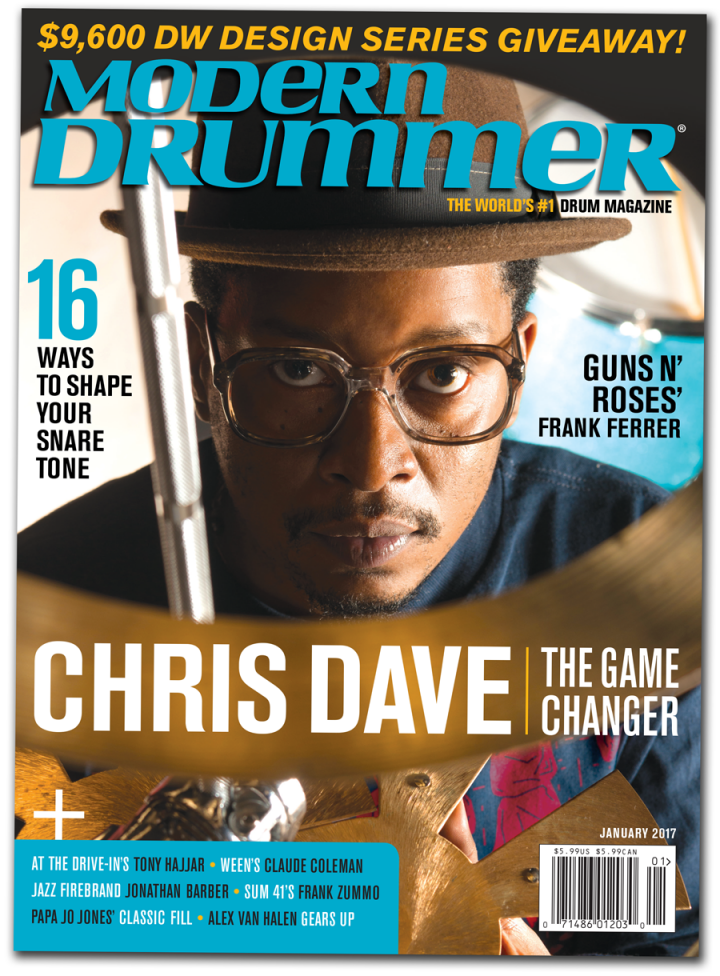 “I try whatever I can think of. There’s no limit on anything.”

The drummer refuses to commit to one kit setup—there are simply too many ideas he wants to explore. What he does commit to without fail is the music— just ask Adele, Robert Glasper, Meshell Ndegeocello, Kenny Garrett, or anyone else whose work he’s elevated sky high. By Ken Micallef.

Some people say you can never have enough snare drums to choose from. But not all of us have such deep pockets. These sixteen off-the-shelf products could provide the answer. By Willie Rose.

The ten-year GNR vet stays hot and hungry by keeping his earliest experiences top-of-mind and close to his heart. By Jamie Blaine.

The world’s a better
place now that his main band has ended its long hiatus. But that’s far from all that the industrious drummer’s been up to lately. By Patrick Berkery.

The latest stop on this journeyman drummer’s career path is Sum 41. Currently he’s hitting
it hard on the road behind the pop-punk band’s latest album, 13 Voices. By Billy Amendola.

AT THE DRIVE-IN’S TONY HAJJAR

The profoundly influential post-hardcore band is back and burning, and its drummer is still finnding new ways to slam its musical messages home. By Ben Meyer.

Grease Up Your Phrases ~ by Rich Redmond

Reviewing and Renewing Your  Goals, Part 1 ~ by Russ Miller

AN EDITOR’S OVERVIEW – Adapting To Change

Readers’ Platform: Which Grip Do You Use?

New albums by the Outlaws and Radian, John Sherman on tour with Red Fang, and more

Rod Morgenstein with the Jelly Jam, Eric McPherson with the Fred Hersch Trio, Barrett  Martin with Tuatara, and more

Kit of the Month – Spirit of America