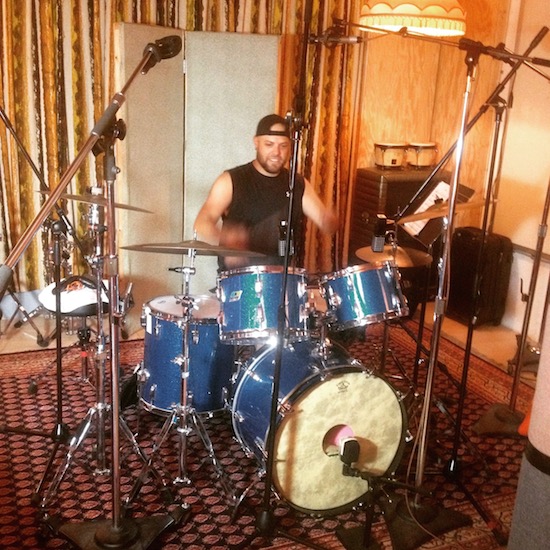 Hello, Modern Drummer readers. I’ve had a lot of incredible musical experiences since I last wrote you two years ago, including recording drums and Irish percussion for the Broadway show Outside Mullingar, and fulfilling my lifelong dream of performing at Lincoln Center in New York City.

Most recently, I had the honor of playing on an amazing compilation album with singer-songwriter Jann Klose that charted in the Billboard Top Ten! The album is called Action Moves People United, and features more than 300 artists from thirty countries promoting world peace though music and spoken word.

The track I played on is Jann’s tune “Make it Better” from the album Mosaic, which we recorded at Hobo Sound in Hoboken, New Jersey. I met Jann in New York four years ago though pianist Lars Potteiger, and have always enjoyed how his music lends itself to a diversity of grooves and textural choices. (Check out the link below.)

“Make it Better” switches from a tight, funky hi-hat groove in the verses to a double time, two-beat feel with a looser hi-hat in the choruses (my Zildjian K’s sound amazing here). The idea was to give the choruses a distinctly different character without departing too much from the original flavor of the tune. One of the biggest challenges in executing so many groove switches is to make the transitions sound confident and smooth.

The rest of Jann’s album required a similar type of subtle creativity. “Beautiful One” is a slow train groove with brushes on the snare and extra beats at the end of the choruses. On “The Kite,” I used egg shakers and a Hot Rod on my 13″ Pearl Omar Hakim piccolo snare with the snares off to create a loose and relaxed medium 6/8 groove. “Four Leaf Clover” is a favorite track of mine, and features a funky hi-hat groove that switches to the ride toward the end over Jann’s layered vocals. All in all, I am really proud of the music we made on that album, and couldn’t be happier that a small bit of it is on this amazing compilation, which promotes such a worthy and inspiring message of peace and understanding.

Along with our song “Make it Better,” Action Moves People United features one of my personal drum heroes Alan White (Yes), as well as Julian Lennon, Martin Barre (Jethro Tull), Anne Haslem (Renaissance), Kathy Sledge (Sister Sledge), the indomitable Tony Levin on bass, and many others. The opening track even includes some spoken word from Dan Aykroyd (who you gonna call?).

Besides working with Jann, I’m keeping busy with a wide range of artists. This summer I toured extensively with the experimental rock band Woodhead, and recorded my third album with Bay-area indie rockers We Is Shore Dedicated (some of those tracks were featured in an odd British film that went viral on YouTube). I also recorded an album with singer Andrea Capozzoli, did a video and tour with the Michael Gallant Trio, and played shows with the Depth and the Whisper, Aurical, Cristiano, Skulk the Hulking, and the Funk Machine.

I’ve also had the opportunity to write some drum education articles for About.com and put up a brand spanking new website and blog, www.robmitzner.com. I’m looking forward to the rest of this year and am humbled by the opportunity to work with such a diverse array of talented people. Thanks again for allowing me to be with you MD readers!

Watch the video for “Make it Better” here: