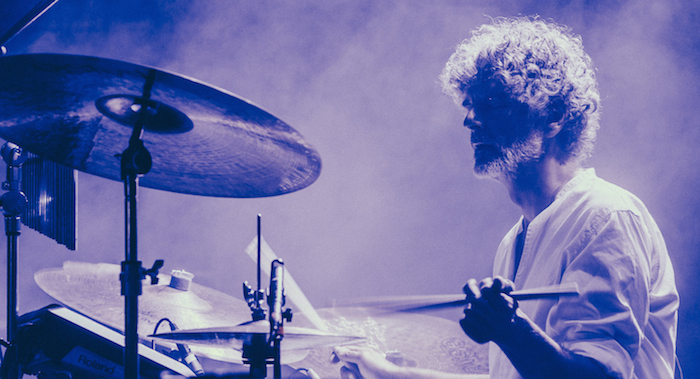 Blonde Redhead formed in downtown Manhattan in 1993 around Japanese art students Kazu Makino (vocals) and Maki Takahashi (bass) and Italian twin brothers Simone (drums) and Amadeo Pace (guitar and vocals). Since then, the group has been a beacon of indie-rock experimentalism, offering endlessly varying modes of invention from album to album. The band’s new box-set, Masculin Féminin, collects thirty-seven early tracks originally released on Sonic Youth drummer Steve Shelley’s Smells Like Records. Presented in four-LP and two-CD versions, it offers an ideal opportunity to hear Simone Pace’s unique aesthetic take form on the band’s initial recordings, including its self-titled 1995 debut album and the sophomore release, La Mia Vita Violenta. We asked the drummer to set the scene for us.

MD: It’s striking how varied the music is on your early releases. So many bands, even great ones, start off their recording careers sort of having their “thing,” which they basically present variations of. But in terms of rhythms, arrangements, moods, melodies…there’s so much going on with Blonde Redhead right off the bat. Was there a desire from the start not to lean on any one vibe too much?

Simone: Yes, there was so much I wanted to express at the beginning, especially because I had just so many different interests in music, and I really wanted to give each song a chance to be unique. However, there is potential for disaster as a record could sound sporadic and unfocused, but I had the rest of the band help me keep that from happening.

MD: You always seem to be thinking in terms of orchestration at the kit. Even something as relatively subtle as the way you play the floor tom on the 1 toward the end of “Without Feathers” suggests that nothing’s automatic in how you approach your parts. Is that a fair assessment? 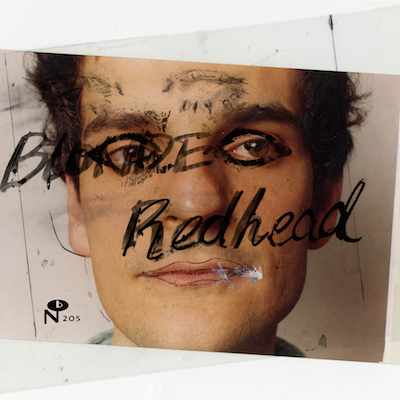 Simone: Thank you, and yes, I was and am always interested in using each part of my drumset like a single instrument and giving it the attention it needs. I learned a lot from playing Brazilian and Cuban styles on the kit, and you are in fact approaching the different drums and cymbals as sections of a percussion ensemble. So interesting, and so lucky to be able to bring that into an alternative context.

MD: That’s a great drumbeat intro on that song as well. Do you remember where that came from?

MD: The sudden shifts in feel on “I Don’t Want U” are so effective, and so precisely played as individuals and as a group. How long were you all playing together before you recorded that first album?

Simone: We used to practice very hard all the time, and we really were thinking about the intensity and direction of each song. I think it was a couple of years of research, writing, and practicing before we recorded the first record, even though it took three days to make. and that’s including mixing. We were poor but prepared, and we got it done.

MD: What kind of musical situations were you in before Blonde Redhead? Your playing suggests that there’s a lot more than rock ’n’ roll in your past. Your control of the ride cymbal suggests that you’ve played some jazz. And there are shades of Brazilian music in your beats.

Simone: Yes, you are right, there was a lot of jazz and Brazilian. But I cannot call myself a jazz player or a Brazilian expert. However, there was a great deal of passion that went into learning and listening. That music is beautiful to express with drums, but also very hard to break through and feel like you own it. I’m grateful to have been exposed to it, but much happier playing music that I relate to deeply.

MD: You’ve lived in a few different places in your life. Are you still in New York? And do you think the city or other locales have affected your musical life at all?

Simone: I am in Brooklyn at the moment, and I like my area very much. There are a lot of creative people around me, and I rely on that. But I like leaving New York as much as I like coming back. I often think about [living in] other beautiful and interesting places, but for right now this is good. The city has definitively helped shape me into who I am.

MD: What was the band’s writing process at the time of the early recordings? Has it changed over the years?

Simone: It was all of us in a room playing and recording hundreds of ideas on cassette tapes. Amedeo is the one that kept listening to everything, then went through it with us. He was very patient and meticulous about the process. Today he uses his iPhone! I don’t know how charming that is. For Barragan, our latest album, a lot of writing happened in the studio and also individually at home. I must say I miss the tape days, but I tend to be a nostalgic person and feel like the secret to our multiple records was just that…I mean the strong loyalty to each other and for the music we want to create. Things change, but you adapt and find your place and space and a way in that means the world to you.

MD: What role did Steve Shelley play in the recordings? Did his being a drummer have any implications for you?

Simone: Steve is a great drummer, and when we toured with Sonic Youth we were all very inspired from his humble and artisanal way of approaching his role. He always looked like he was making something as he was playing. I think I understood then that my role needed to have the weight that only humility provides. It’s difficult to understand because there are so many different types of drummers, but in twenty years I don’t think I have taken a drum solo. Ha ha ha! But Steve was very hands-off as a producer, except he helped choose the takes—A or B. I think he didn’t want to disturb the process we had, and he was right.

MD: A song like “Amescream” is so rhythmically compelling. Can you point to any particular artists that might have influenced you or your bandmates along those lines?

Simone: Well, it was all about letting go and pushing forward. At the beginning I was a bit uncomfortable with Amedeo screaming his heart out, as it was very unlike him to do that, but it was all about the energy. I think My Bloody Valentine and Sonic Youth and really early Pavement were influences around that period.

MD: Do you recall what gear you used at this point in your career?

Simone: I was using a round-badge Gretsch Red Sparkle set with Istanbul or K Zildjian cymbals. I’m not sure on the exact year of the drums.

MD: How has your setup changed since then, and why?

Simone: When we decided to go without a bass player, I started to add a keyboard to my setup with a really primitive contraption, which I am going to refrain from explaining. The point was to compensate for the bass that we were now without. The concept kept developing, and a bit later on I bought a Prophet 600 that I would sequence with two Alesis MMT8 [sequencers] and an HR 16 [drum machine]. Later on I upgraded to an MPC 2000 XL [production center] with a Juno 106 [analog synth] and so on. Today we use Ableton Live [software music sequencer] and a Roland SPD [sampling pad].

MD: “Harmony” is one of those songs that has such a wide dynamic range. Does that element of your music affect your gear choices? For instance, which heads you use, how heavy your cymbal models are….

Simone: I usually don’t experiment with heads. I use Remo Ambassadors on the toms, an Emperor X on the snare, and a Powerstroke on the bass drum. To me that can cover everything I need to do as far as my music is concerned. I do spend a lot of time tuning and try to make the drums sound as melodic as possible. I have quite a few cymbals, and when I record I bring as many as possible just to have options.

MD: The KCRW live-in-the-studio tracks on Youtube are cool. Do you feel particular pressure during those types of performances, especially since the camera’s are there, preserving everything forever? 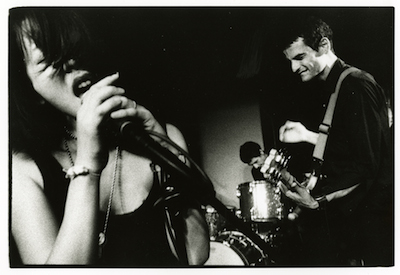 Simone: That day was insane, and I remember it very well: We had KCRW in the morning, then Lollapalooza in the afternoon, and a concert at night. I booked that tour, and that was my fault! But to come back to your question, I do okay in situations like that and usually don’t get too nervous. It’s exciting to know that you’re capturing an instance in time, but I don’t think about that at the moment, so it just goes by and then it’s done. Before you know it, you’re packing up.

MD: The 4AD session video from 2011 is a nice way to see and hear you up close. The drum sounds vary so much, even though you’re playing an acoustic kit. How are you controlling that?

Simone: With the setup I mentioned earlier, so by then it was Ableton Live and the SPD. I love playing with other drum parts that I create, and I always try to make us blend as much as possible. I had the SPD trigger some sounds as well. That record, Penny Sparkle, is a dense one. The producers, which were two of the members of Fever Ray, had a lot of input in the sounds and direction. The record is a bit of a challenge to reproduce live, so it’s great to have the 4AD session to document that performance.

MD: You and your brother are twins. Do you share general likes and dislikes? Did you grow up playing instruments together?

Simone: Amedeo and I have played together our whole life. At the beginning we were both playing guitar but I switched. We both love the same things for the most part but hear music differently. When he says, “I love this song,” I have to pay attention because I know I will love it eventually as well. But it’s different elements that speak to us and capture our attention when we are first exposed to something new. That’s what I think is interesting and makes us unique.

MD: So what’s the rest of 2016 looking like for you and the band—recordings, tours, quality time with your motorcycles?

Simone: We have been performing our [2004] album Misery Is a Butterfly with a string ensemble, and we plan to develop that more. Also we wrote two new songs and recorded them. We’re trying to figure out what to do with them still, but I really like them. Also we have a small label called Asa Wa Kuru, which we are running and learning from. And motorcycles—yes! That has also been a very educational time and so interesting for me. I love them!