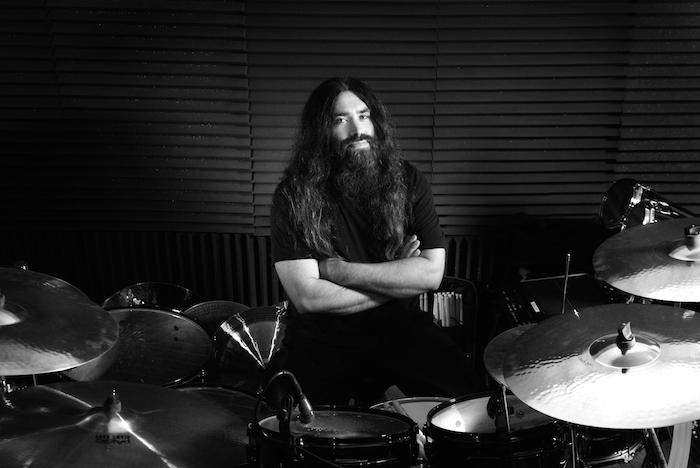 With a new album on the shelves, a new single topping the charts, and an extensive domestic tour underway, things are looking bright for veteran drummer Jamie Perkins of the Pretty Reckless. Who You Selling For, the rock group’s third full-length release, hit the streets this past October 21, and Perkins is currently tearing across the U.S. in support of the album with dates booked through early December. Perkins took time away from his whirlwind schedule to speak with Modern Drummer.

MD: What was the writing process like for the new Pretty Reckless record?

Jamie: The truth is that I can’t claim to have written anything besides some of the drum parts. I’m lucky that Taylor [Momsen, lead vocals and rhythm guitar] and Ben [Phillips, lead guitar and backing vocals] came in with some really great songs. Then it was just about trying to take those songs where they needed to go.

MD: Had they demoed the songs with any drum programming?

Jamie: No, I just heard acoustic versions of all of them, and then we went from there.

MD: So writing your parts was an organic process?

Jamie: Very much so. We tend to finish the arrangements as we’re tracking the drum parts. There’s a lot of thinking on your feet in this band! [laughs]

MD: That comes across in the music. Were the rhythm tracks done live, or were parts overdubbed?

Jamie: Every song is a little different. Some songs were already figured out and others were very spontaneous. Some of them definitely kept me on my toes. [laughs] Ultimately it’s a good thing, especially if you can hear that in the songs. Sometimes [Taylor and Ben] have specific ideas for drum parts and sometimes they don’t. We wind up experimenting a lot to figure out what the right thing is.

MD: It’s been written that the band was going for a more raw approach on this record. Was there less editing, and are these mostly full takes?

Jamie: I’m not sure if they’re all full takes, but there are definitely some. We really didn’t want to fix a lot of things. If there were mistakes that worked, we wanted to keep them. That’s the thing: getting the mistakes to work.

MD: There seems to be a rebellion among many drummers today against everything being completely pinned to the grid and edited to death. It seems like everybody is getting sick of that.

MD: Was all of the album tracking done in one place?

Jamie: All of the drum tracking was done at Water Music in Hoboken. We’ve worked on every album there so far. It’s kind of like home.

Jamie: Yes, on most of it. On the song “Back to the River,” though, we all recorded together in the room at the same time with no click.

MD: And the tempo shifts a little?

Jamie: Yeah, there are time changes within the song.

MD: Did you track the record on your live rig, or was it done on rental gear?

Jamie: I actually wound up recording with my live rig, which is a Pearl Reference kit with a 24″ kick, 12″ and 13″ rack toms, and 16″ and 18″ floor toms. We swapped out snares depending on what sounded best for each song. I figured that the 24″ kick would be too big for some of the songs, but that wasn’t the case. We got it in there and miked it up, and everybody was so happy with it that we just stuck with it. I used my Paiste Signature series cymbals on all of the songs.

MD: What are your formal endorsements?

MD: What heads did you use on the record?

Jamie: We mostly used Remo Emperors. We started off with coated models and then about halfway through we switched to clear heads. Everybody liked that they had a little bit more tone in them.

MD: Are you planning on using that same rig for the upcoming tour?

Jamie: Yeah. I might experiment with some different Paiste cymbals. I’ve been thinking about trying out the Dark Energy series.

MD: Are you playing with a click or backing tracks live?

Jamie: It’s as organic as possible. I have a Roland SPD-SX that I use to trigger intros, and if there’s a sound effect that somebody wants to use, we’ll throw it on there. There are no tracks so far, though on one song on the new album, “Prisoner,” we might wind up having a track of the intro when we play it live.

MD: There’s such an interesting part in that song at the beginning.

Jamie: Thanks. It’s funny, because I’m just so trained to hear those louder hits on the backbeat. I have to consciously tell myself that those are 1 and 3, not 2 and 4. I should also mention that I had a great drum tech in the studio for this record. His name is J Colangelo, and he’s in Hoboken. He was invaluable.

MD: Is he with a rental company?

Jamie: He’s got his own company called Demon Drums. He was kind enough to loan us some of his snares for different songs. He has a beautiful 1930s Black Beauty that’s in amazing shape. Everyone I know wants to steal it! [laughs]

MD: Are you planning to use the same sizes that you recorded with on tour?

Jamie: We’re messing around with some ideas. I think I might have to expand to a rack and pick up some more percussive things.

MD: Is that to cover some of the parts that were included on the record?

Jamie: Yeah, the percussion on “Take Me Down” in particular.

MD: That’s the first single, and it’s already out, correct?

Jamie: That is, yes. It’s been out about a month, and we just found out that it’s number five on rock radio.

MD: Were any of the songs on the album particularly memorable or difficult to track?

Jamie: “Oh My God” was a rough day. I was sweating a lot that day, but it turned out to be my favorite thing we’ve done so far. It was more than worth it.

MD: How was Kato [Khandwala, producer] to work with?

Jamie: Kato’s great. At this point we’ve been working together so long that I know what he thinks about things by the way he responds. [laughs] Even if he’s just saying, “Okay,” I can kind of tell what he thought of the take. It kind of helps streamline the communication process. We all start off making a record knowing that we’ll figure it out eventually. If it doesn’t happen right away, nobody gets too stressed out about it. Taylor and Ben came into the studio with ideas for over twenty songs. They were all good, so we were scrambling to get as much done as possible. That’s what this album is—what we could finish.