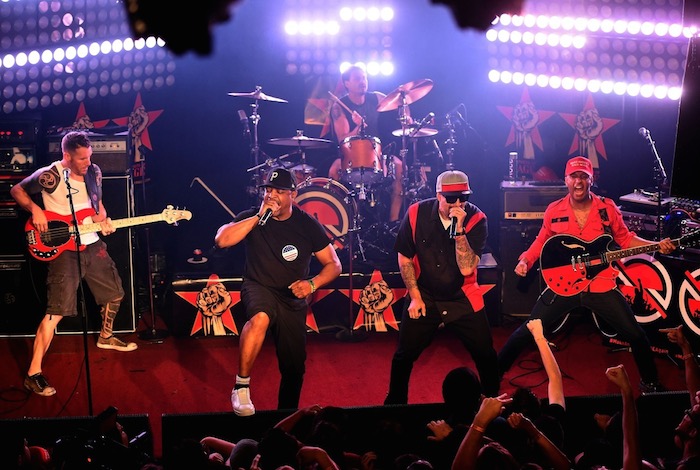 We recently spoke with Brad Wilk about Prophets of Rage, his new band with his Rage Against the Machine comrades Tom Morello and Tim Commerford, on the eve of its first tour. At the time the group, which also features Chuck D and DJ Lord of Public Enemy and B-Real of Cypress Hill, had just played outside the Republican National Convention in Cleveland and made its television debut on Jimmy Kimmel Live!, so that’s where we began the discussion.

MD: Now that you’re finally sharing the new band with audiences, how is it going?

Brad: It really feels great to be playing these shows live. The reason that I became a musician is to experience that connection between a band and an audience, and I’ve always been in bands that had a really strong connection. This band falls along those same lines. It’s awesome to finally be out there and playing to crowds again.

MD: On Jimmy Kimmel Live! you could feel the urgency coming off the stage.

Brad: That’s so great to hear. There really is a sense of urgency coming into these elections. I think we’re living in a country with a lot of disenfranchised people, with a two-party system that just doesn’t work for most of the country anymore. So it seems like there needed to be a band like us that gave a voice to people that didn’t feel like Hillary Clinton or Donald Trump, or a Democratic or Republican party, was the answer.

MD: Does that make room in your audience for the supporters of those people and parties as well?

Brad: Of course. One of our main goals is to make people think. And coming to one of our shows may make them think differently. We’re not just preaching to the choir by any means. Even if we piss you off, we’re happy to do that. Anything other than just neutralization is what we’re looking for.

I see the candidates really as puppets. The people who are running the country is basically big business. They have more power to affect change in this country than any people in numbers, which is not what this country was founded on at all, and if there is any specific group that we’re railing against, it would be them.

MD: Could you describe your experience in Cleveland at the RNC, both playing outside the convention and then playing an arena gig?

Brad: We got there, and we wound up playing in a park outside the RNC, which was amazing. It was a really guerrilla-style show that was set up, and we basically played our set and then went directly from the stage out to a march, for about two miles, to the RNC. And it just felt like a day that we were all doing something right, and we felt a part of something that was bigger than ourselves.

There was such a heavy police presence that it almost seemed like there were more police than there were marchers at times. Very intimidating, just completely armored up, you know, ready to go, but the truth is that the march was completely peaceful.

MD: Was that the first large room you played, in Cleveland?

Brad: No, in Cleveland we played the Agora Ballroom, and that was actually a little smaller than the Palladium in Los Angeles. The Palladium was an incredible night. I just felt so great, again with the connection between the band and the audience. It made me feel like we were actually making a difference and we were a voice for people who are so frustrated. It made me feel like music still has the power to move people, to get people to rally behind things that they believe in. Music is a magical thing, it really is. Not to sound too spiritual about it, but it’s true—music is something that moves people, period.

MD: Maybe this is obvious, but did the band take shape because of what’s going on now beyond music?

Brad: Yeah, it was certainly a huge part of the picture as to why this is happening now. I got a call from Tom, and one of the first things out of his mouth was that he wanted to put this band together because we have elections coming up and not a whole lot of choices, and it didn’t seem like there are any bands really speaking up at the time. And I’m sure there are, but we just felt like we needed to do as much as we could for the times right now.

MD: When you got in a room, did you decide on a few tunes from your different groups to get started?

Brad: The first time we played together it was just with Chuck D and DJ Lord, and me and Tim and Tom. The cool thing is that we have incredible history with both Public Enemy and Cypress Hill, so it made perfect sense to have people from both of those bands join in with us.

Before Rage Against the Machine even had our record deal, we were opening shows for Public Enemy in like San Luis Obispo and up north, and they sort of took us under their wing super-early on in our career. And Chuck had come on stage with us, maybe in 1997, at some festivals. He has such an iconic voice, and DJ Lord is such an incredible DJ, that getting in a room with the both of them, the second that DJ Lord starts doing his thing and the second that Chuck D opens his mouth, it’s this thing that hits me right in my gut. To have that in the room right off the bat was really exciting, but we weren’t sure where it was gonna go.

B-Real actually didn’t join in until a couple rehearsals after, and once he got in the room and it was all of us, we saw the bigger picture of what this was and the potential that this had. B-Real, again, has such a dynamic and unique voice, and it’s in such a different place on the frequency charts from Chuck D, and between the both of them it’s a really fulfilling and full sound.

MD: Hearing them sing “Killing in the Name” together, I was pretty floored. Chuck is sort of the opposite of [Rage Against the Machine vocalist] Zack de la Rocha, and B-Real is a little bit closer in terms of the timbre of his voice.

Brad: Here’s the thing: Zack could never be replaced. He’s an incredible talent, he’s so unique—just like B-Real and just like Chuck D. So the idea was, if we’re going to play these Rage Against the Machine songs, no one is replacing Zack in any way whatsoever. It’s really B-Real and Chuck D’s take on Zack’s lyrics. And they kind of do their own thing to these songs, while also paying respect to Zack’s cadence and his thing. So it’s paying homage to Zack while at the same time adding their own flavor to it.

Playing the Rage songs is great, and we also play Cypress Hill songs and Public Enemy songs, and we kind of do that in the same vein as we did the last Rage Against the Machine record [Renegades], which is we took covers and we wrote completely new music to the songs and kept the lyrical content the same. Sometimes we’ll keep part of the music or part of the grooves from those songs within the new track.

MD: In terms of drumming, you’re playing some real hip-hop grooves with the band, especially in the new song “Prophets of Rage.” We’ve talked in the past about how you pulled back the syncopation in your playing with Audioslave, since it wasn’t touching on hip-hop the way Rage Against the Machine did. How did you come up with your approach for the new song?

Brad: So much of what I do has to do with listening to everybody and finding a spot within the music that works. The “Prophets of Rage” song is very much a percussive track. The most important thing to me is finding verse grooves that stick and that don’t ever take away from the vocal and only add to it. So that’s my biggest concern, and also just making sure that between the bass and the guitar and the drums, we’re doing things that sound exciting to us. Working with Timmy and Tom, we’ve had a chemistry that’s unique and that we’ve had for so long, so it’s really about utilizing that chemistry but also pushing forward and making sure that I’m playing things that I haven’t necessarily done before.

MD: The three of you have gone through the decades now and had several different bands, and it’s great to hear you breathe together and evolve.

Brad: That’s cool to hear. Yeah, I feel really good about the “Prophets of Rage” track and the things that we’ve recorded, and I’m excited to continue and to record some more.

MD: Is there a plan for doing that?

Brad: Yeah, we definitely want to record more music, it’s just we’re so slammed with tour obligations right now. But hopefully we’ll get around to it just before the tour, or sometime on tour. I don’t know—maybe we’ll go old school, Led Zeppelin style, and just pull a mobile unit up and record some songs. [laughs]

Brad: One of the greatest records of all time!

MD: I consider you a “gut” guy, but you’re a thinker too. When you revisit a song from your past that you haven’t played in a while, do you think about what you’re going to play? Do you practice the old track at all, or do you just let it happen?

Brad: In rehearsal, that’s when I’m doing the thinking. A lot of times I’ll listen to the original track, just to feel where the groove sways. I’m not necessarily listening to the parts, because the parts will forever be in me; a lot of it is muscle memory. Within a song the grooves will sway one way or another, and that’s something that I spent a lot of time and a lot of work on. So that’s a lot of what I’m listening to—where the ghost notes are within the track and how it’s leaning forward in some parts and leaning back in other parts. That’s what to me as a drummer can bring a song to the next level, and it’s something that I feel is a lot of the uniqueness between us: the space that we create.